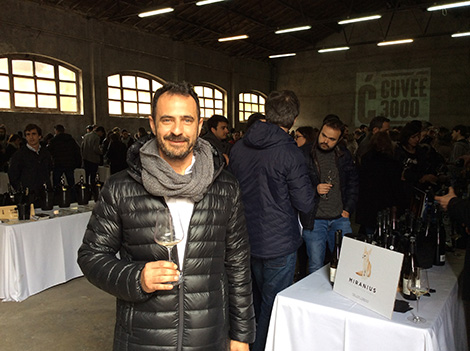 It’s been some time since natural wines were restricted to a small, almost partisan group of wine lovers. Distributor Joan Valencia, who has given a prominent status to natural wine producers in his Cuvée 3000 portfolio, is one of the leading figures driving the change in Spain. He went further with the launch of Brutal in 2013. In partnership with natural wine producer Joan Ramón Escoda, from Conca de Barberà (Catalonia), and the Colombo twins, a couple of Italian chefs, this wine bar is not only a place of pilgrimage for natural wine geeks, but a must-visit address for any wine lover visiting Barcelona.

Cuvée 3000, organizer of the Vitis Vinifera tasting that used to take place every two years in Barcelona, brought together 50 producers in Madrid last week in a new event called Muestra 2018. It was a great opportunity to taste lots of Spanish and international natural wines -as well as other mainstream styles- and to catch up with Joan Valencia.

Can your recall the first natural wine you tasted?
It was La Llopatera by Joan Ramón Escoda [Celler Escoda Sanahuja in Conca de Barberà]. Joan introduced me to a style of wine that seduced me on the spot.

What attracted you the most?
I have always been interested in the culture and the landscapes behind the wines and I discovered that artisan wines are more transparent. It’s easier to see the producers’ progression in their respective territories. Natural wines are about a philosophy of life and there are two ways to get here: you can either start from scratch or unlearn things, which is the case of many winemakers with a standard technical background who are increasingly drawn to natural wine.

How would you define natural wine?
It’s very difficult to synthesize. The “nothing added, nothing taken away” motto is not entirely convincing and I don’t want to sound like a fundamentalist with this. I think it’s more about a way of life, a philosophy and about being humble. It’s also about focusing on attention rather than intention. When there’s an excess of intention such as an excessive use of lees, for example you run the risk of masking what is relevant. Ultimately, the goal is to mirror the landscape without disturbing the view. In this sense it’s important to avoid filtering -or just filter very gently- in order to preserve the essence of the wine.

To what extent should sulfites be included in this definition?
There are a lot of misunderstandings with sulfites. Whether the wine has none or 20mg per litre is not relevant. I may not enjoy a wine with 80mg per litre, but there’s nothing wrong if producers add a couple of milligrams prior to bottling if that is how they make wine.

Why do you thing the wine world has not been able to find an alternative name for the much criticized word “natural”?
The name was probably wrong from the very beginning. But despite the fact that none of us like it, it has prevailed and we all use it. I’d rather talk about naked wines or living wines -they bring life back to soils, revitalize small communities and provide work to other artisans. Perhaps my favourite words to describe them are transparency and nakedness.

Are flaws part of natural wines?
The most important thing in wine is balance. I’m not going to take this argument to the grounds of the wine industry or talk on behalf of those advocating for technical perfection. The agrofood industry uses winemaking to set the standards of beauty in technological wines.

What is the real weight of natural wines in Cuvée 3000’s range?
Between 70 and 80% of all our producers make natural wines. This represents 35% to 40% of all the bottles we sell.

How do you balance both worlds? Wouldn’t it make more sense to have a different company specialized in natural wines?
Clearly, I have been able to work with natural wines because I already had a distribution business that was respected by the trade. When I started selling natural wines 10 years ago, the Spanish market wasn’t yet ready for a niche distribution.

What about specialist retailers?
I think wine stores should sell all sorts of wines; the hospitality business is an entirely different issue. At Brutal for instance, we only pour natural wines. But these wines need to be explained. Natural wine consumers usually have more wine culture and are eager to meet the producers. On the other hand you don’t need to know what a natural wine is to drink it. Wine is intended to be enjoyed and shared.

What is behind the success of Brutal?
It has become a global benchmark for natural wines. People are more impressed by my Brutal business card than my Cuvée 3000’s. My Italian partner is great at communicating and the selection of wines we have put together is difficult to find  anywhere else. It’s a good testing ground and has helped us to manage our foreign producers’ allocations. We serve many top natural wines by the glass.

Natural wine has become a trend in itself. In fact, we have seen leading producers in Spain adding natural wines to their ranges.
Yes, but most often than not they just make sulfite-free wines that are sold at higher prices because making them is more laborious. I could say it’s silly to see highly respected producers making natural wines, but it’s not if it helps them realise that these wines develop well and that they can reduce the amount of sulfites in the rest of their range. The wine industry is in debt with artisan producers as it has been forced to react to this movement. In any case, it’s funny that they jump on the bandwagon after being so critical in the early stages.

Is natural wine a big business?
Natural wine sells out except for wines that are not balanced. At Brutal we run out of whites to serve by the glass from January to March. Many good producers who don’t make natural wines may have problems to sell their production. We really need more small producers willing to embrace artisan wines as a way of living.

Scarcity is clearly linked to the small size of the producers. Is there a limit to what a natural producer should be able to produce under this philosophy?
Ideally, production should not exceed 20,000 bottles. Despite the fact that some producers reach 50,000 bottles, it is easier to pay more attention to detail if you stick to 20,000.

Can producers make a profit with such a small production?
It’s complicated to go beyond €15 ex-cellars as consumers are not willing to pay beyond €50 for a bottle in a restaurant -and this happens on a global scale. We have a poor understanding of farming. Grape growers farming a relatively large surface of land end up selling their grapes and/or wines at very low prices; they have no time to mess about. However, a farmer who works 3.5Ha but in a successful way can be much more precise. This has more to do with a way of life than business.

How do you see the future of natural wines?
As consumers evolve, they become more demanding but also more tolerant of other beauty standards. In terms of taste, we have moved on a great deal from the days when certain issues were considered taboo.

Can natural wines be an entry door to wine for young people?
I think it’s easier for non wine drinkers to fall in love with natural wine. These wines are exciting and generate more passion among a younger audience. We see it in Brutal. Young people are attracted by the liveliness of these wines. They enjoy expressions like “vegetal water” which was coined by Joan Ramon Escoda and Laureano Serres [a producer in Terra Alta]. Unfiltered young wines are very easy to drink.

What does Joan Valencia drink?
I used to say that I enjoyed wine both as a landscape and as a secular Mediterranean drug but I have removed the last part of the sentence (laughter).  I love to drink transparent wines: some natural wines haven’t got it, some non natural wines do. None of the great wines of the world nowadays have an excess of oak or sulfites or wear make-up. I drink good wines but I always look for this transparency. In terms of 'traditional wines', I prefer to drink them after some cellaring time.