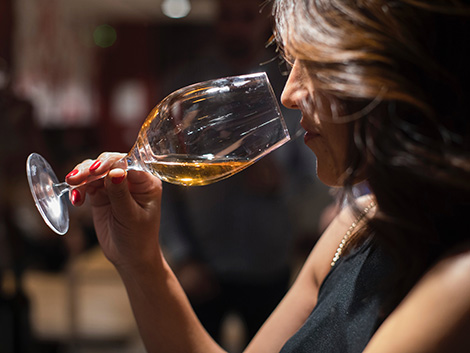 Wine professionals rely on their senses in their daily activity.Foto: Abel Valdenebro.

Convinced to be “one of the unconfirmed numbers in the UK to have contracted the coronavirus”, Master of Wine Alistair Cooper, a regular contributor to www.jancisrobinson.com, shared a diary with the annoying symptoms he had experienced, none more harrowing than the loss of smell. It is not an isolated case. Another British wine critic, Jamie Goode, wrote about it in his blog a few days ago.

Miquel Hudin, an American Croatian wine writer based in Marçà (Tarragona) who suffered similar symptoms, found that Cooper’s piece was a brave step forward that prevented other professionals in the same condition from feeling alone. “Before that, people felt embarrassed to admit that they had contracted the virus," he said. Beyond the scary loss of smell and partially of taste, the hardest part for him was feeling constanty tired and weak.

In the case of Norrel Robertson, a Scottish Master of Wine based in Spain, it all started with a cold, followed by fever, cough and, in a matter of a couple of days, the loss of smell. His wife and two children had the same symptoms. In fact, all the family got sick and lost their sense of smell.

Robertson can even recall the moment it happened: “I was cooking grilled chicken and my nose started itching. It continued for around half an hour, as if our kitchen was filled with smoke. While I was dining I realised I could not smell any more, even if I no longer had had a stuffy nose.”

For Montse Alonso, who heads the wine section of Mahala, a communication agency, the loss of smell was the main symptom she experienced together with migraine and weakness.

None of them could verify their condition with a test, but Alonso had been in close contact with someone who had tested positive for Covid-19 and Hudin had health professionals calling him every two days to monitor his evolution. Like many wine professionals, they had attended various tastings and crowded wine events in the previous weeks where, as usual, they shared spittons with other attendees. Will this change in post-coronavirus tastings?

A doctor friend of mine who treats coronavirus patients in a Catalan hospital referred to a paper by Dr. Yan-Chao Li and several colleagues at the University of Jilin in China  that was recently published in the Medical Virology journal. Their research indicates that in addition to causing respiratory failure, Covid-19 may infect nerve tissue. It seems that one of the entry pathways for the virus to spread into the nervous system could be the inside of the nose, where the smell receptor neurons (which are in turn connected to the brain) are placed. This would explain the loss of smell (anosmia) and sometimes also of taste (ageusia) in patients infected with coronavirus.

AbScent, a British charity that helps people with olfactory dysfunction, has seen a significant increase in membership since 16 March this year. In addition, it has echoed the evidence of many cases of anosmia or hyposmia (reduced ability to smell) in countries that have conducted a higher number of tests like South Korea. Here, 30% of patients who tested positive experienced loss of smell, and in some cases this was their main symptom. Other studies carried out in recent weeks, including one conducted on 417 patients from 12 different European hospitals, have confirmed that loss of smell and taste should be recognized as significant symptoms of Covid-19 infection.

Given that wine professionals rely on their senses in their daily activity, aromatic and taste distortions can be major setbacks. Robertson could taste  flavours (sweet, acid, bitter) and tannins and could assess the tension of a wine on the palate, but the loss of smell was frustrating. “It didn’t allow me to do my work properly.”

Montse Alonso recalls being “unable to smell anything, not even via retronasal olfaction. On the palate I could’t feel texture, acidity or the wine’s glicerine, just alcohol.” Miquel Hudin will probably never forget his experience tasting one of his favourite Chablis. “It was a Premier Cru and it tasted disgusting, basically like dirty water with alcohol, although it is a wine I love. It was terrible,” he told SWL.

Robertson had a previous experience, all the more alarming, when he partially lost the sense of touch in his tongue after he had a filling. "The anesthesia affected the lingual nerve. It was even more distressing because it was something completely new for me," he recalls. This time he has taken action quickly by acquiring a kit for olfactive training ("this is basic work in perfume-houses where they start with simple scents and move on towards more sophisticated ones") and is practicing simple movements to stimulate sinus drainage. Norrel says that the scent kit has proved a great tool for his family with his children now practicing regularly morning and evening. "This experience has led me to have greater appreciation for smell and to realize that in our work there are things we can do to preserve it," he noted.

Montse Alonso is recovering gradually, but when we talked last week she said she was still far from feeling 100%. “I don’t have problems with fruit, I tasted a Pazo Señoráns Selección de Añada 2004 and I could feel quince aromas but the wine lacked the distinctive, kerosene-like nuances originating during reductive bottle aging. I guess it is because these are complex aromas found in lower layers. I also tried a Fino Inocente from Jerez which tasted fresher and younger than it should do.”

A recovered Miquel Hudin, who shared his first line-ups of wines post-illness in his Instagram account, reckons that it takes some time to get back to normal.

All in all, the best thing for all these wine professionals is that loss of smell was temporary. According to Juan Cacho, Professor of Analytical Chemistry at the University of Zaragoza and founder and honorary director of the Laboratory for Aroma Analyisis and Oenology, “if the smell fails, food doesn’t taste and eating is no longer a pleasure. That's why many anosmic people fall into depression.”