He is 33 years old, with a good head on his shoulders and his feet on the ground. Wine has always been part of his life -Castro Ventosa, the family winery in Bierzo, is owned by his mother, María Isabel, uncles José Daniel and Raúl (Pérez), and cousin Arturo.

The Pérez family is proud of its wine-growing roots in Bierzo, dating to the 18th century. Back then, one of their forebears wrote in his will that the family was to give a glass of wine from their highest vineyard to those who were present at his burial. It seems that the obsession for finding the best sites is embedded in their DNA.

César speaks proudly of the 85 hectares under vine owned by his family in Valtuille de Abajo and neighbouring areas. Many of them are in some of the most interesting parajes (sites or lieux-dits) in Bierzo’s new, Burgundy-inspired classification. He also concedes that it is not easy to be Raúl Pérez’s nephew -Pérez, one of Spain’s most reputed winemakers has been a major influence among the new generations of producers, particularly in Galicia and León.

Wine runs in the family’s veins

Does Raúl cast a long shadow over César? “You can probably sell one vintage because you are the nephew of someone important, but not the following ones. I have tried to find my own path,” he admits.

You realise what he is talking about when you visit his winery in Valtuille de Abajo. Márquez has restored a charming building dating from the early 19th century, which once served as a wine cellar. Resting below the old wooden beams, it seems as if those barrels and foudres had always been there. However, 2015 was César’s first vintage and the first that was aged in this building.

Márquez knows well how to define his areas of work. After studying oenology in Requena (Valencia), he spent seven years working with his uncle, first at Castro Ventosa, then helping him to launch La Vizcaína, but in 2017 Márquez took the reins of the family cellar. He is well aware that the Castro Ventosa style must be classical -elegant wines that are pleasant to drink. Blends are always decided with his uncle Raúl and they are getting more and more refined at it. This is obvious in the excellent 2018 vintage, which has set the bar really high. 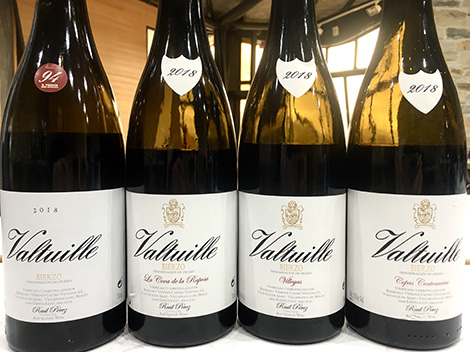 César's main contribution to Castro Ventosa has been to broaden the bodega's young Mencía portfolio to include barrel-aged wines. The new Valtuille 2018, which will be labelled as vino de villa (village wine) from the 2019 vintage, is the quintessential fragrant, expressive bierzo that makes you fall in love with the region. With its wild berry aromas and fine tannins, it’s deliciously fresh and easy to drink. The premium vinos de paraje (lieux-dit) range included Villegas, La Cova de la Raposa and Rapolao and will soon incorporate a new wine from a site in Valtuille de Abajo called La Vitoriana. It is set to be Castro Ventosa’s top red and will retail well above the rest of the range. It will be a different wine from the eponymous red that Raúl Pérez has been producing at La Vizcaína for some time now.

César says that the most important thing that he has learnt from his uncle is “to understand and respect the character of the sites.”

His small project has been growing steadily to reach just under 30,000 bottles in the 2019 vintage. This figure stands in contrast with the few batches sourced from sites like Rapolao, Sufreiral and Zagalín (Pico Ferreira) plus some white grapes he started working with in 2015. Márquez doubted whether to blend them, but he finally decided to release limited editions ranging from 300 bottles (El Rapolao) to 740 for La Salvación, his white wine.

Buying vineyards is not his priority. César owns less than one hectare of vines scattered in several plots that his family gave him plus half a hectare in San Juan de Paluezas, a village with whitish, chalky soils that are rare in Bierzo -here he wants to make a top red that could eventually become vino de viña calificada (the equivalent of a cru classée). Given the many difficulties of recent vintages -mostly due to mildew but also severe frosts in 2017- Márquez is happy that he didn’t invest in vineyards; if he had done so, he would have run into debt and wouldn’t have been able to develop his project as fast as he has.

The range of wines start with Parajes (€15.45 at Decántalo, around 18,000 bottles), a regional, entry-level red that he has been producing since the 2016 vintage. “I usually look for plots that I like, then try to find out who the owners are,” he explains. Grapes that don’t qualify for other wines or do not have the quality he demands for his best reds also end here. The 2019 vintage blends grapes from Valtuille, Villafranca, Toral de los Vados, San Pedro de Olleros, San Juan de Paluezas, Valdecañada (Ponferrada), Corullón, Camponaraya and Arganza. This is a fresh, pleasant, medium-bodied bierzo with crunchy red fruit and fresh herbal notes, probably from the whole bunch fermentation. 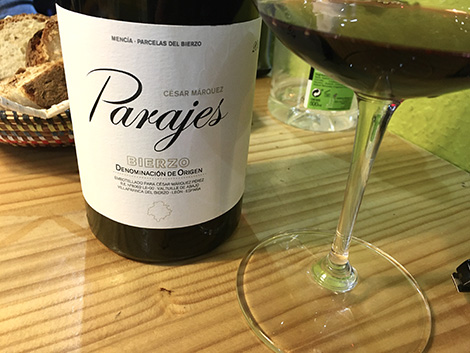 As expected, his village wine (vino de villa) comes from Valtuille de Abajo (€19.45 at Decántalo, 3,200 bottles). This red, previously called Las Firmas, was renamed in the 2019 vintage to adapt to the new classification. The label is particularly understated. It features the words “Valtuille Vino de Villa” in black letters and the producer’s name in red over a white background. The legend “Villa de Valtuille de Abajo” printed in light silver grey letters goes almost unnoticed. It’s a desired effect: “I wanted Valtuille to feature prominently,” César explains. In terms of style, his Valtuille is more structured that the one he makes at Castro Ventosa, but also firm and finely textured; it will benefit from some time in bottle. Grapes are sourced from local growers with vineyards on sandy sites like Villegas, El Llano or El Val, plus El Rapolao or La Vega. 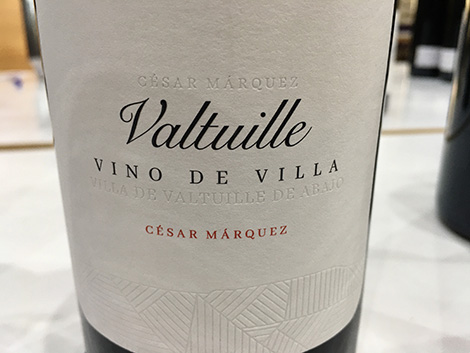 When it comes to vinos de paraje (lieux-dit), César has looked beyond Valtuille and its clay, sand-rich soils. The only exception is El Rapolao (€31.90 at Lavinia, 1,200 bottles). Grapes are sourced from a north-facing area which is slightly higher than the one he uses for Castro Ventosa. 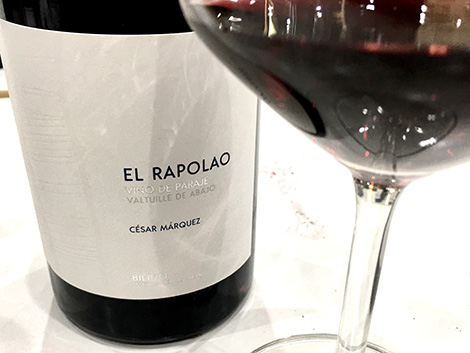 Pico Ferreira (€31.90 at Lavinia, 1,200 bottles) comes from a site called Zagalón, a steep site with poor slate soils and a northeast aspect in Corullón, at 710 metres above sea level. The cool climate of the site prevails over the warm influence of the slate; it is an elegant and refined bierzo (pumice stone, petals, herbal notes) with firm tannins and a greater than expected acidity in this type of soil. According to César, he looked for “elevation, purity and freshness.”

Sufreiral (€31,90 at Lavinia, 1,200 bottles) is in Toral de los Vados, a village on the opposite side of the mountain. At 620 metres elevation, this terrain is gentler, with limestone soils that provide mineral notes and a different texture. There is less fruit here, but the wine makes you salivate and has a long finish. This is probably the wine with the strongest personality in the range. 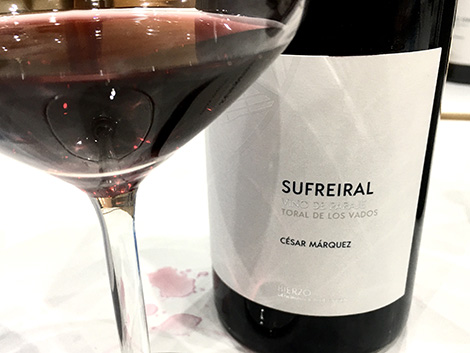 The white La Salvación (€23,90 at Lavinia, 2,100 bottles) is made from 100-year-old Godello vines in Villafranca, Valtuille, and Arganza, an area that is known for its freshness, says César. The winemaking is really simple: grapes are pressed directly, then fermented and aged in barrel for a year without any bâtonnage. The 2019 vintage combines the variety’s unctuous character with vibrant acidity and a long, razor-sharp finish. 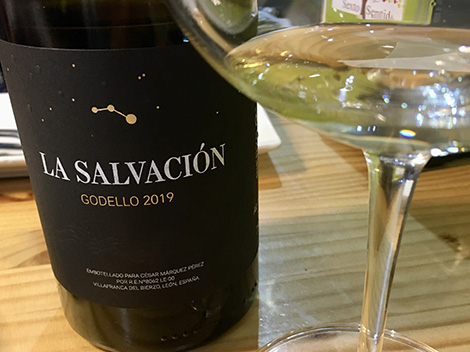 All reds include varying amounts of stems, but Márquez acknowledges that there have been variations in style. He started fermenting full clusters but wasn’t happy with the result, so he gradually reduced the presence of stems until he realised that the crux of the matter was the timing of the harvest. After an early, difficult vintage in 2017 when he struggled to control ripeness, he now trusts his palate and harvests earlier, when the fruit is crunchy, rather than sweet. This implies lower alcohol (between 12.5% and 13.4% abv.), less robust wines and more stems again to achieve extra complexity. Additionally, pH levels have dropped one or two points. “I feel much better working this way,” he says.

A matter of style

Another differentiating element, both in his cuvées and in those of the family winery, is that all the grape varieties dotted in the old, traditional vines are blended together. While Mencía is always dominant, it is common to find some Garnacha Tintorera (Alicante Bouschet). White grapes are also found, particularly in high areas like Corullón or Toral de los Vados to the point than César limits their presence in cuvées like Sufreiral or Pico Ferreira so that the wines are not too fluid.

Despite the pandemic, Márquez has opened new export markets. "I have gone from eight up to 14 countries this year and this very week I am speaking with importers from three other countries. Bierzo wines are attracting interest abroad as people look for fresh, fluid wines with restrained oak, in the style that the area is gradually adopting," he points out.

Talking about the future, Márquez says he is fully committed to Bierzo. Unlike his uncle, he has no intention of making wines in other regions for the time being. "It's not the right moment. My goal now is to improve my family's wines and focus on my own business, which is not going to grow significantly in volume or go much beyond 30,000 bottles."

But being focused on his own region doesn't mean he is inactive. César tastes lots of wines from Spain and abroad and, during my visit, we chatted at length about styles and producers. He is inquisitive, reflective and I suspect that not too inclined to be driven by fashions. A producer to follow closely and one who will undoubtedly shape the future of Bierzo.

Bierzo approves a Burgundy-inspired classification
Descendientes J. Palacios spearheads change in Bierzo
The one and only Raúl Pérez: new projects in Bierzo
What to expect from the new Bierzo categories