Some wine producers pursue perfection obsessively. Sara Pérez is far more interested in understanding the reality that surrounds her and capturing it in a glass of wine. But this often means thinking out of the box and and taking risks.

The Pérez family do not back down in the face of difficulties. When Josep Lluís Pérez Verdú settled in Gratallops in the 1980s together with René Barbier, Daphne Glorian, Carles Pastrana and Álvaro Palacios, making world class wines in such a rugged, forgotten region was barely a dream. Today Priorat can boast Spain’s highest average retail prices per bottle.

Sara’s childhood was nomadic. She was born in Switzerland, lived briefly in Martorell and San Cugat in Barcelona and arrived in Priorat at the age of nine. Only a year later, she experienced her first wine epiphany when her father took her to Escaladei. There she met Assumpciò Peyra, who ran the winery together with her brother ("although she was the real character", Sara recalls) and gave her a taste of a 1964 rancio. Right then she said to herself that one day she would make a wine like that.

Sara studied biology because she was interested in physics, entropy and chaos theory. "Only living things are able to get organized in order to store energy and the only way to transfer energy is by satisfying the entropy of chaos; we need change," she points out as we barrel-taste the upcoming vintages of Venus La Universal, the venture she shares with her partner René Barbier Jr. (Clos Mogador) in the DO Montsant nearby.

It wasn’t easy to arrange a date, but we eventually met on a sunny morning to visit Venus, Mas Martinet in Priorat and Els Escurçons, the vineyard which was badly hit by fire in 2015. Sara decided to produce the few grapes that escaped the fire so that the resulting wine, marked by smoke taint, could tell the sad story of the vintage. The lost vines were replanted in 2020 after leaving the land to rest for three years. Today the vineyard shines magnificently. Planted at 600 metres elevation, it offers breathtaking views of the region -this is mountain Garnacha at it best. 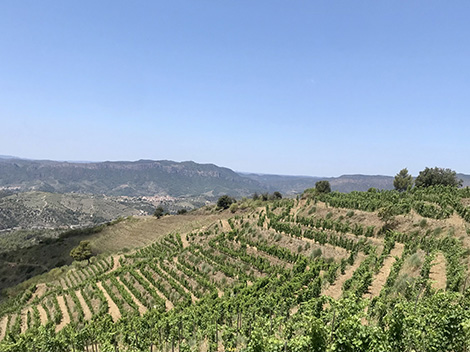 The 2020 vintage was even more painful. Mildew wiped out 86% of the grapes in the Mas Martinet vineyards and Montsant was also badly hit. After struggling to manage so much frustration, Sara has assumed that "there is no such thing as a zero threshold; you have to share space with diseases, deer and wild boars".

Yet her commitment to sustainability remains firm. Vineyards are farmed organically since 2006 at Martinet and since 2009 at Venus, but they go beyond the certification to champion agroecology. This is a holistic approach which draws from permaculture, biodynamic and organic farming. It does not only encourage biodiversity and environmental awareness, but also takes into account the people involved in the process.

Always willing to take on challenges, it is not surprising that Sara is able to focus all her energy on lost causes. Grape varieties are a good example. "For a long time, my favourite variety was Cariñena. Before phylloxera, there were 15 white and 15 red varieties in Priorat, and Garnacha dominated the elevated areas,” Sara points out. “When phylloxera arrived, the few people who remained in the region planted Cariñena closer to the villages. In the 1980s, the "Clos" movement introduced international grapes and Garnacha was also planted in lower areas. Now that Cabernet Sauvignon is in decline, we want to see what this variety can offer in Montsant. It is not a matter of planting it again; we’d rather not uproot what is already there. In the end, biodiversity is the key to resilience."

Mas Martinet: past and present

Sara Pérez is encouraged both by her desire to recover lost traditions as well as by the need to develop her own vision: "Each generation must be able to interpret things their own way", she says, but not unconditionally: "What I would not dare to compromise is latitude, as I work with grapes grown in the Mediterranean. You can pick your grapes whenever you want, as long as the wine speaks of the place." 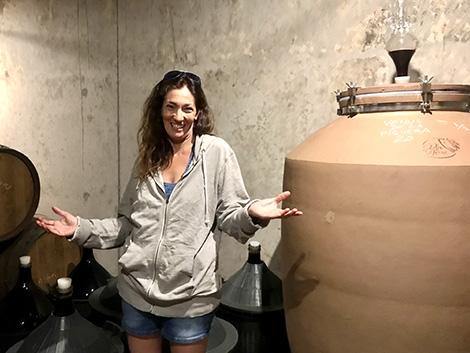 As part of a natural evolution, she thinks it’s fair that each generation denies the previous one and tries to regain their grandparents’ spirit. "It is my job to review the revolution of the 1980s, to reinterpret the previous generations and to put things in order," she points out. Despite this, she feels very fortunate with her father from whom she took over at Mas Martinet in 2001: "He has always questioned everything; and even though he comes from the academic world, he has never made a fuss about me making natural wines".

Perhaps the rancio, the traditional wine subject to oxidative, extended aging times which Sara describes as a cross-generational sip, can bring a whole saga together. "You need four generations to produce it", she points out. Sara started making hers in 1995 by using old wines that had been kept by local families and some very old madres -starter culture, comprised of yeast cells from previous batches-, that a lady from Torroja gave her as a gift. The cask starting the Solera is known as bota padrina (godmother's cask). It was a precious treasure for families in the region and was sold only in case of real need. 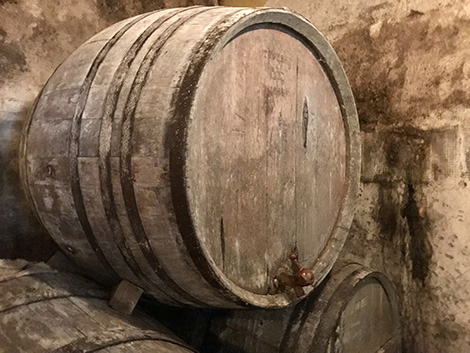 The Mas Martinet solera is fed with bunches of Garnacha hung to dehydrate in the shade for one to two weeks, according to the characteristics of the vintage. Once they have the required sugar concentration, grapes are crushed and put to ferment until the alcohol reaches 16 to 16.5% abv.; then the first casks of the Solera are filled with it. Martinet Ranci is released in extremely limited quantities as it accounts for a third of the bota padrina -just over 300 medium-sized bottles. This is a sweet, creamy, lush-textured wine with 80 grams of residual sugar.

The barrels and casks of different sizes that make up the solera are stacked in a narrow cave that transports visitors back in time. Next to it, the ageing cellar is indescribable. The unusual combination of barrels, amphorae and glass demijohns generates a rather magical atmosphere (did any other visitors think of Arabian Nights?). 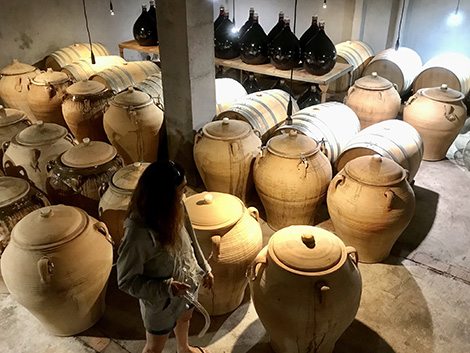 The fact that Els Escurçons avoids oak in order to preserve the character of Garnacha (the wine is fermented in amphorae and aged in glass demijohns) adds a unique, distinctive feature. In contrast, Camí Pesseroles, a blend of Garnacha and Cariñena sourced from vineyards grown along the Camí Real, the royal road between Gratallops and Torroja, doesn’t see clay; instead, oak and chestnut barrels and glass, to a lesser extent, are used. The most eclectic red is Clos Martinet. It does not only include a larger number of local and international grape varieties; it is also a blend of batches aged in all types of containers.

Montsant is a different story. Whilst Sara and René convey their vision of the family wines at Mas Martinet and Clos Mogador, Venus La Universal is more of a meeting point; a place to exchange opinions and to match two different ways of working. The name Venus is a nod to a venture that, as its website says, started as a love story.

Located in Falset, the winery is imbued with the personality of Sara and René. Simple and unpretentious, it houses seasoned wood together with a wide variety of fermentation and ageing containers (foudres, barrels of different sizes, amphorae or concrete tanks). The tasting room has been conceived as a large and welcoming open area, decorated with dozens of bottles shared with friends and wine lovers. 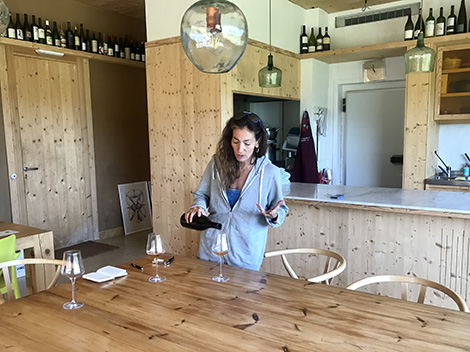 They started buying grapes from local winegrowers ("for them, it has been a great effort to let grass grow in their vineyard") and now there are 15 of them. Sara and René only own three hectares of land and have five more rented. Tasks have been divided internally: Sara is focused on the vineyard while René does the winemaking. In practice, it's not that simple, particularly when it gets to harvesting time. "René used to tell me that I picked green grapes, but for me it was the perfect point for the kind of vinification I do: crushing and then avoid touching barely anything. For me the problem was that he was intervening more actively in the winery. Now, we first decide the winemaking; then we pick grapes accordingly," she explains.

Sara, who has been more involved in winemaking recently, points out that the most important thing is to find a way to work together in order to achieve a multiplier effect. "But to get there you have to do a lot of research," she adds.

The range of wines has steadily evolved in recent years. Soils are clearly defined for the Dido range (granite in the red, limestone in the white and a combination of these plus sand and clay-limestone in the rosé) and a refined mix of grape varieties. Dido white is the result of co-fermenting Garnacha Blanca, Cartoixà (Xarel.lo) and skin-contact Macabeo that is later aged in barrels and clay vessels. The rosé is a multi-varietal blend with around 20-25% of white grapes displaying distinctive tension and freshness and aged in barrels and old foudres -these photos of clusters and musts published by René on Instagram a few days ago speak for themselves. 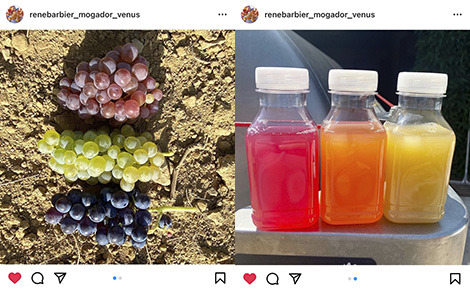 According to Sara, the Venus range of wines reflects their most special landscapes. At Venus La Universal, co-fermentation is also a priority if the vintage allows it. Venus de La Figuera comes from a superb vineyard grown in the eponymous village, one of the most elevated in Montsant. I visited it with René before the lockdown and we tasted on site this mineral, slightly earthy Garnacha grown on limestone with distinctive tension and energy. Sara believes that a bit of rusticity make sense since vineyards are grown in places thar are not fully tamed. "Rusticity equals freedom, a sort of wilderness or the knowledge that one can always hide in the forests; that's the character of the people here," she says. 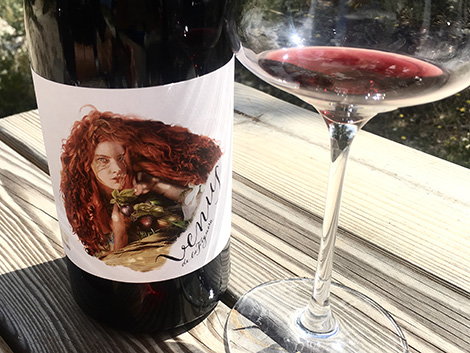 Venus de Cartoixà is a Mediterranean, sulfite-free white made from Cartoixà (Xarel.lo) and sourced from a 60-year-old vineyard grown on clay-limestone soils. In the pipeline awaits another natural wine: Venus de las Pieles, a complex Macabeo with eight months of skin contact. It could still take two more years until its release.

Sara is aware of the risks of working without sulphur, as high amounts of brett and volatile acidity may appear. But she also knows that she doesn't want to adhere to the status quo nor stop researching new ways of working. And she says she misses some new impetus. She thinks that Priorat needs young people to renew the area. Anyone willing to take up the baton?

Priorat: is it all about terroir?
Priorat whites: a tiny but appealing category
Our red -and white- picks from Priorat
A guide to Priorat’s new vineyard classification
The increasing diversity of reds in Priorat