Located in Valladolid province, La Seca is a village with a strong wine-growing tradition and boasts the largest surface under vine in DO Rueda: 3,600ha against 2,742ha in the nearby town of Rueda. La Seca (pop. 1,100) is home to no less than 20 wineries. It’s hard to miss the one owned by the Vidal Soblechero siblings, Vidal and Alicia, who have continued the family tradition of growing vines and producing wines in the village.

When we visited them last year, the first thing we noticed were the birds of prey stationed at the entrance. Falconry is Vidal Vidal’s passion -and a very useful one as falcons scare away animals that may cause damage to the vines. 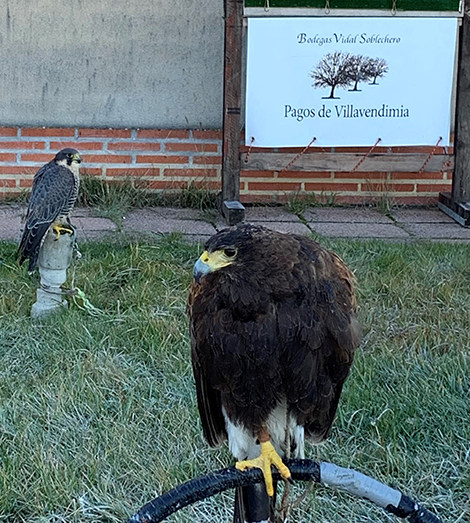 The Vidal family has been present in La Seca for 15 generations. Alicia’s and Vidal’s grandfather sold bulk wine to other bodegas and to merchants in northern Spain. Their father, Claudio Vidal, farmed the land until his death in December 2009. "He was a sort of visionary. He planted Tempranillo using cuttings from the Pérez Pascuas family in Ribera del Duero and did a massal selection from Quintana del Pidio, a village which is also in that DO", they point out. Chemical products were never used in the estate. “Claudio used to say that the vine's three major pests are powdery mildew, moths and, above them all, salesmen of chemical products.”

Brother and sister also go against the tide. They have preserved many traditional farming practices and produce a range of single-vineyard whites which are usually released after extensive bottle aging. Focused as they are on their vines, they are little known in Spain, but we’ve seen them pouring their wines at Viñateros in London (their UK importer Carte Blanche is not short of praise for their single-vineyard wines) and at BeRanci!, a dry rancio and oxidative wine show held in Perpignan.

Exploring the vineyards of La Seca with Vidal and Alicia is a priceless experience. Driving north out of the village, the Camino del Puerto (literally Port Road, as it used to lead to an old river port) works as a dividing line between clay-dominant soils on the right side and limestone-rich land on the left. Towards the end, the lower part near the river is mostly sand. In vineyard sites near pine tree forests like El Infierno, Buenavista, Martínsancho, Cantarranas, Saltamontes… sand is also found. Some of these names appear on the labels of wines produced in the region. “All of them have very poor soils and you may find some pre-phylloxera vines,” Vidal notes.

A glimpse into the area’s history

La Seca, as well as Rueda, Serrada, Medina del Campo and many other villages in the provinces of Valladolid and Segovia that belong to DO Rueda, are part of Tierra de Pinares (Land of Pine Trees). This region, together with Tierra del Pan (Bread Land, for its focus on grain) and Tierra del Vino (Wine Land) form three major geographical areas in Castilla y León whose names are intrinsically linked to their respective landscapes and crops.

In the case of La Seca, wine growing developed when the Pedroso and Inestoso forests were cleared at the end of the 15th century. The Spanish Catholic Monarchs granted their permission in response to the need for wood to rebuild buildings damaged by fires in nearby Medina del Campo, then a powerful village. Cereal was the first crop to be planted on this spare land, but as yields were very poor the land was soon left fallow. Vineyards turned out to be a blessing. From then onwards, wine farming gradually shifted away from the prairies of Alaejos and, notably, Medina del Campo, whose wines were renowned at the Castilian court, towards the terraces near the Duero river in La Seca, Rueda and Nava del Rey. These terrains feature loose soils with stones, mainly pebbles and gravel deposits collected during past widenings of the river. 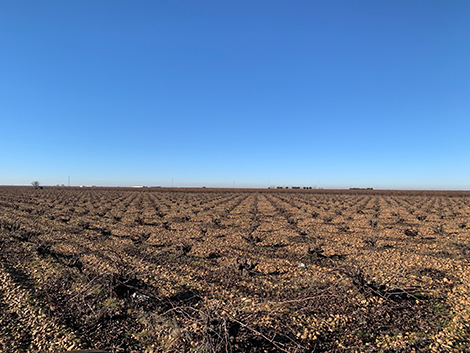 It was during the 18th and 19th centuries that La Seca enjoyed its most prosperous period, explains Ángel Suárez Aláez in his book Historia de la villa de La Seca (History of the village of La Seca). Thanks to the flourishing wine trade with the Cantabrian coastal regions, the population grew to almost 4,000 inhabitants and the village's landmark buildings were erected. In 1796, writes Suárez Aláez, the region produced "48,000hl of the best white wine in Castilla y Léon."

In the 21st century, trellised vines and mechanical harvesting are the norm in Rueda, but the Vidal siblings champion human-scale wine growing. For now, La Seca has resisted massive plantings. "There are only a handful of estates with 15 or 20 hectares under vine; the majority are one- or two-hectare plots. We are not a village of landowners," they point out.

Still, they yearn for a less production-driven landscape. "The arrival of industrial wineries selling to supermarkets has encouraged single-crop farming and the dominance of Verdejo and trellised vineyards," they add. The demand for young wines has fuelled this process, say the pair, including the widespread transformation of bush vines into trellising. And this, despite the fact that, as Vidal says, "there are some excellent wine growers here who are really skilled at their job."

The new regulations approved by DO Rueda's Consejo Regulador establish a premium category called Gran Vino de Rueda for wines made from vines aged at least 30 years old with yields below 6,500 kg/ha, but it doesn't adopt any measures to protect old, goblet-trained vines, which are gradually losing ground in the area. Of the almost 50 hectares owned by the Vidals, only three of them are trellised: the Sauvignon Blanc vineyard planted next to the winery and two Verdejo plots, which are useful to monitor any differences between both training systems.

Although Verdejo prevails among white grapes, they also grow old Viura and Palomino, a variety which was known as Jerez or Dorado in the area, says Vidal, and was mainly destined for "fast oxidative" wines, aged for three years in glass demijohns. Now, together with ITACYL (Castilla y León Viticulture Research Centre), they are recovering Prieto Picudo Blanco, an obscure variety whose cultivation seems to be confined to La Seca and produces many small-sized bunches. So far, they have planted free standing and trellised vines in three different types of soils. The first wines display herbaceous notes.

As well as bush vines, they advocate for traditional practices such as ploughing with horses to aerate the soil -something they consider necessary in an area with low rainfall levels-, mow the grass and remove shallow roots, as well as generating plenty of dust to repel moths. As opposed to trellised vineyards that can only be ploughed in one direction, bush wines allow for crossed and even diagonal ploughing (the local name for this is saitín). As they do not own horses or mules, they rent them from Carlos Geijo, who is based in Tudela de Duero (Valladolid), and offers ploughing services to growers in Gredos and Arribes. The horse that usually works the Vidal’s vineyards is called Ocho. 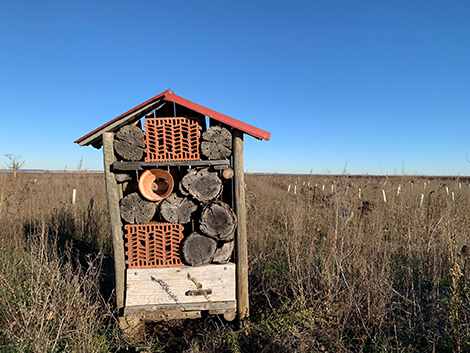 They are convinced that Verdejo's creeping shoots, easy to see in goblet-trained vineyards, are a great advantage to have shaded bunches in summer and let the leaves absorb nutrients from the soil. Vidal also points out that as leaves are in contact with the soil, the presence of chlorosis -a common problem in chalky and limestone soils- is reduced. Likewise, the influence of stones, which Vidal says is crucial, is much more effective on goblet-trained vines. "Stones mitigate spring frosts; they retain heat from the soil and moderate the temperature. At the end of the ripening cycle, they also help to reduce the stress derived from extreme temperature variations," he adds.

Out of the 250,000 bottles made, a significant part is sold with the DO Rueda seal. This includes the entry-level white Clavidor, a blend of 50% Viura, sourced from a plot known as El Tomillar, and Verdejo from various vineyards, and Viña Clavidor Parajes, a brand destined to the on-trade that blends most of the family plots and can be described as a village wine from La Seca. The 2020 vintage offers both dry stone and fruit notes with good intensity on the palate. There are two additional whites sold as DO Rueda made from old vines: Clavidor Cepas Viejas and Villavendimia Cepas Viejas.

The flagship cuvées are the single-vineyard whites, sold without the DO seal, under the Pagos de Villavendimia brand. This range is released with extended bottle ageing, something unusual in the region. Production is really limited, usually fewer than 1,000 bottles, except for El Escribiente, which is sourced from a 4ha vineyard on a hillside with three different soil types: limestone in the upper part, clay in the middle and sand in the lower section. This is an unoaked Verdejo, just aged on its lees, with hay and dry stone aromas; medium-bodied, flavoursome and fluid with an austere finish. The current 2017 release is just perfect and in good shape; 9,000 bottles were produced.

Finca Varrastrojuelos, a single-vineyard Viura with long ageing potential, is made from chalky soils. The 2014 vintage is set to be released soon but I tasted the 2011. A bit reduced at first, it opened up to display spices, toasted notes and hints of olives. The palate was pure umami, sapid, lively, with good acidity, hints of dried fruits and a long finish that made me think of Rioja. Grapes for Finca El Alto Verdejo are sourced from the most elevated section of the same vineyard and is aged in 300-litre French oak barrels.

Verdejo grown on sandy soils is represented by Finca Buenavista. Grapes are sourced form a plot near the river with large pebbles on the surface. Being more delicate, this wine is aged in a 600-litre foudre. Finally, Finca Matea is Verdejo from clay soils; we tasted the 2013 vintage (yes, 2013 is the current vintage of this wine). It displayed ripe white fruit, creamy notes and mineral character. The wine is fermented and aged for over 12 months in 300-litre French oak barrels. These single-vineyard whites can be found for €22-25 € in Spain. 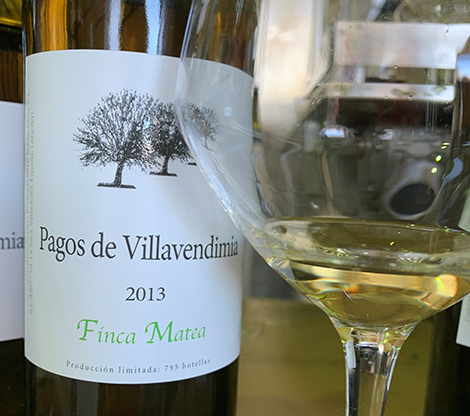 As a result of his father's passion for reds, the Vidals have their own range of Tinta Fina or Tempranillo, which they sell as VT Castilla y León. Virtually a third of their vineyards are red grapes from pebbly plots, the soil that Claudio Vidal considered to be ideal for this type of fruit.

They also produce two single-vineyard wines: Finca La Perdiz and Finca Las Sernas. From the latter I tasted a 2013 that was fresh and balsamic. Selección de la Familia is only released in very special vintages.

Equally interesting is La Oxidativa, their interpretation of the traditional oxidative Verdejo wines aged in demijohns that we tasted at the Be Ranci! fair in Perpignan at the end of last year.

Sure it's difficult to remember all the different names, but our advice is to try at least one single-vineyard white from Pagos de Villavendimia. The vintage on the label might raise some doubts and you might not really know what to make of these wines bearing the generic VT Castilla León term, but we think you will be pleasantly surprised.

Barco del Corneta: Verdejo from another perspective
Riscal has its eye on Verdejo old vines in Segovia
Ismael Gozalo, a benchmark for natural wines in Spain