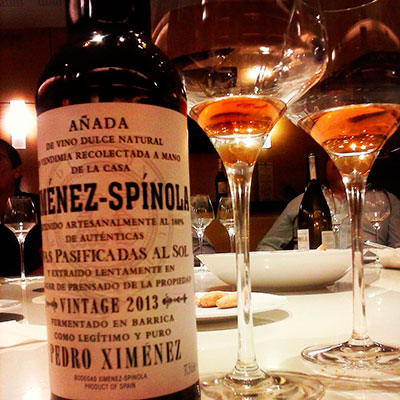 Despite its centuries-old tradition, Ximénez Spínola is not a typical sherry bodega. It is still controlled by the descendants of the family who founded the winery in 1729 -something increasingly unusual in the area- and all its wines are made exclusively with Pedro Ximénez, in an area where Palomino is the dominant grape variety.

José Antonio Zarzana represents the ninth generation of the house founded by Phelipe Antonio Zarzana Spínola. He is focused on quality and exclusivity - only limited and numbered editions from its annual solera selection are sold so it is arguably the winery with the smallest production in Marco de Jerez, an area covering the towns of Jerez, El Puerto de Santa María and Sanlúcar de Barrameda. They have recently moved to a small but well tended winery on the road to Sanlúcar, in an area surrounded by vineyards. Access is easier here than around the old wineries in town, located in the traditional narrow streets found across southern Spain.

The winery sources grapes from its own 20 hectares of Pedro Ximénez vineyards grown organically (albeit without official seal) and works with natural sugars coming from the fruit’s own fructose after sunning the grapes.This raisining process reduces yields up to 30% of the total harvest -Ximénez Spínola PX, the winery’s flagship wine (€49, 9,200 bottles), suffers losses of 700 kg per tonne of grape. Concentrated and unctuous, it has a long and very elegant finish.

Other wines in the range include Old Harvest Medium Dry (€24/50cl bottle, 8,600 bottles), made with a 1964 solera (groups of butts holding wines of different average ages but started in that year) containing oxidatively-aged Pedro Ximénez blended with some wine from the 1948 solera (raisined PX). The result is an expressive and fresh wine despite its 17% abv with some of the trademark notes of oxidative aging. At 12% abv, Ximénez Spínola Vintage 2014 (€19/37.5cl bottle; 13,000 bottles) is an unfortified vintage wine -unusual in Jerez, where the solera system is dominant. It is aged for three months and yields are as low as 200l of must per tonne of grapes.

About a decade ago, José Antonio decided to break with conventions and produced a dry white vintage wine made with Pedro Ximénez. A firm believer that this variety descends genetically from Riesling and has developed its own features after 400 years in the Iberian peninsula, José Antonio travelled backwards and forwards to Germany to work and learn more about vinification processes in the Rhein in order to adapt them to his native Jerez.

After a long period of trial and error, he launched his Exceptional Harvest in 2010 (€19.95, 12,600 bottles) and is now onto the 2015 vintage. Grapes are picked overripe after 21 days on the vine and skins are macerated. Fermentation is stopped to maintain alcohol levels low (12,5%); then the wine is aged in used American oak barrels and lees are stirred over a four-month period. It has been a painstakingly long process but, according to José Antonio Zarzana, the result justifies the effort.

On the 2014 vintage. Ximénez-Spínola launched its Fermentación Lenta (3,000 bottles, €26), a dry wine made with Pedro Ximénez grapes dried in the sun for 21 days. It is fermented in 300-litre French oak barrels which are filled daily with small 30-litre batches -hence the name slow fermentation- so that the yeasts finish off the sugars and leave a dry wine. It is then aged for six months with gentle battonage.

As both Exceptional Harvest and Fermentación Lenta have alcohol levels below 15% because they are not fortified, they were not allowed to carry the DO Sherry label. But finally, after three years waiting, Zarzana managed to obtain their own seal which is now visible on their labels: Denominación Varietal Pedro Ximénez.

As well as wines, Ximénez-Spínola makes vinegar and a range of brandies. Like some of the best inventions in life, it surged during a crisis period. José Antonio explains that in 1948, in the midst of Franco’s autocracy and with an isolated crisis-ridden country, his grandfather found himself with three vintages worth of wine stored in his winery. As he could not sell the wine, he decided to take some old Pedro Ximénez chestnut butts for distillation thus producing one of the most well-known brandies in Jerez. Barely 3,000 bottles are produced nowadays - each one of them is sold before it reaches the market, numbered and signed by the hand of a Spínola, as dictated by tradition.

Bodegas and tapas welcome visitors to Jerez
The essential guide to Spain’s sweet wines
A complete Sherry guide: our best articles about the region
From our archive: a sherrylover’s guide to the region and its wines