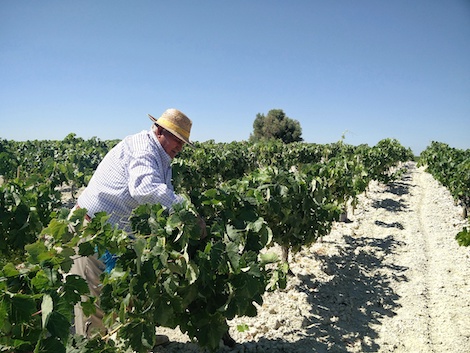 Antonio Bernal, a veteran grower or mayeto from Sanlúcar, works in La Charanga vineyard. His son, also called Antonio, is one of the members of Mayetería Sanluqueña. Photo: Yolanda Ortiz de Arri

The world today seems a bit gloomier, closed off and socially distant than it was six years ago, when we published our first articles about the Sherry region on the newborn Spanish Wine Lover website. We may not be able to go out and socialize much this year, but fortunately we still have wine, which allows us to discover or travel to places in the world that inspire us or to which we are eager to return.

The pandemic has made it impossible to hold events such as Vinoble or the horse races in Sanlúcar, but it has been unable to stop the seventh edition of International Sherry Week, which continues its activities with hundreds of events in 28 countries. There are also countless online activities so if you want to join, check them out on this page of the Sherry Regulatory Council.

As we did in 2017, Spanish Wine Lover is once again joining the celebrations with a selection of articles published on our site over the years that provide a good overview of the country's most unique and international wine.

For those who wish to have a general overview of the region and the wines made there, we recommend you read this piece with basic information about grape varieties, soils, production and ageing areas, wine styles and pairings.

The wealth of styles is now larger than ever: biological and oxidatively aged wines share space with the recovery of historic wines by Willy Pérez and a new wave of white wines with no added alcohol. This trend, started by Equipo Navazos, was followed by Ramiro Ibáñez and Alba Viticultores and has now been adopted even by small growers such as Callejuela or Mayetería Sanluqueña, among many others. They all prove that Palomino can be the perfect introduction to world class Sherry wines and a good vehicle to express albariza terroir.

In this return from the bodega to the vineyard, it is important to mention the inspiration that many of these producers have found in the great wines of the 50s and 60s, made with grapes from the best vineyards and with excellent development in the bottle. Amaya Cervera talked extensively about this subject with journalist Luis Vida and Juan Manuel del Rey, owner of El Corral de la Morería, after a memorable tasting of old Generoso wines that she attended at Enofusión 2019.

Albariza soils dazzle even foreign producers such as David Léclapart, who produces a range of white wines together with Alejandro Muchada in Sanlúcar, or Peter Sisseck, who has chosen Jerez as his base to launch one of the region's most eagerly awaited finos.

At the 2016 edition of Vinoble, the recently appointed president of the Regulatory Board, César Saldaña, spoke of an "unstoppable change of cycle" in Jerez and left the door open for "a future presence" of these producers under the umbrella of the DO. This has not yet occurred but at Vinoble 2018, after the unforgetable tasting conducted by Ramiro Ibáñez and Willy Pérez, a prominent specialist in the region like Sarah Jane Evans MW spoke of "a new stage for Jerez, and a strikingly democratic one, sharing the knowledge and history with us all".

Despite the window of optimism that exists for sherry wines asserting their terroir, the challenges facing the region —and indeed the rest of Andalusia— are still considerable, as we reported after the 1st Congress on Andalusian Traditional Wines.

Sherry wines are tremendously food-friendly and are capable of enhancing the dishes of many world cuisines as well as being an ingredient or the perfect pairing for the food prepared by chefs across Spain. You can discover many of them in our Addresses section, with bars and restaurants from Cádiz down south (Aponiente, Mantúa, La Carboná, El Espejo Gastrobar, El Campero, Tabanco El Guitarrón or the wonderful Taberna der Guerrita which hosts some awesome tastings like this with Antonio Flores) to Madrid (Surtopía, Taberna Palo Cortado, El Corral de La Morería, La Malaje, Bache) or even Japan.

The work of sommeliers like Juan Ruiz Henestrosa —winner of the National Gastronomy Award and now running Little John, his burger place in Rota— is essential to convey the greatness of these wines, because as he acknowledges in this interview, “talking about wines from the Sherry Triangle is fashionable but consumption has not increased. It’s true that quality has improved —that’s a step in the right direction”.

This is an opinion shared by the writer and wine critic Peter Liem, for whom the market for sherry wines is necessarily small: "it's not a wine for everyone and I think that's something we have to accept”

Sherry-laden cocktails like the Sherry Cobbler, so popular in the US in the late 19th century, are back to stay as our US correspondent Bill Ward wrote in this interesting piece where he also suggests some sherry-friendly addresses from Manhattan to San Francisco. Vermouth has also found inspiration in Sherry, as our cocktails expert François Monti explained; so much so that there are a few producers in the Triangle reconnecting with their own vermouth past.

From Rioja to Galicia, Bierzo or Rueda, producers from far away wine regions like to experiment with the veil of flor to add an extra dimension to their wines, as Amaya Cervera explained in this piece.

Undoubtedly, the best way to discover what’s so special about the Sherry Triangle is to spend a few days in the region and walk on albariza soil in legendary vineyards like Macharnudo or Miraflores before visiting the wineries, tabancos and tabernas in Jerez, El Puerto and Sanlúcar de Barrameda.

You will find cathedral-like cellars like Barbadillo, González Byass, Lustau or Estévez but also small traditional wineries with their old oak casks like El Maestro Sierra, Emilio Hidalgo to Tradición, and the rest of producers reviewed in our Wineries section. The Sherry region has got the beauty, the art and the greatness of one of the world’s most fascinating wine regions.

Top sherry wineries and tapas in El Puerto and Sanlúcar
Bodegas and tapas welcome visitors to Jerez
Sherry Festival in San Sebastián: Our top 10 wines
Is Sherry the most versatile wine in the world?
El Maestro Sierra: a tale of courage and perseverance
Estévez: a vision of the Sherry Triangle from Macharnudo to Miraflores
Sherry meets Rioja and other flor stories
Andalusia’s traditional wines at a crossroads
Mayetería Sanluqueña: artisans working in the vineyard
Muchada-Léclapart: albariza meets champagne
Peter Liem: “Sherry is not a wine for everybody and we just have to accept that”
Ramiro Ibáñez brings soils and terroir into Sherry country
Southern treasures (I): Manzanilla
Southern treasures (II): Pedro Ximénez
A complete Sherry guide: our best articles about the region