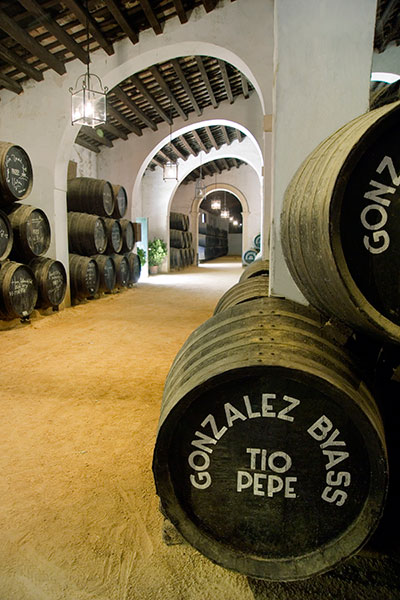 This is one of the most prestigious and well-known sherry wineries in the world. It was founded by Manuel María González Ángel, a trading house employee born in Sanlúcar de Barrameda who in 1835 and with the help of his uncle José Ángel de la Peña —the famous Tío Pepe— gathered some savings and entered the burgeoning wine business with the purchase of a small winery next to the Alcázar (one of Jerez’s landmarks) where he started to make his own wines.

The business thrived thanks to the shipments of Fino sent to England, a new but risky adventure given that Cream and Oloroso were, until then, the dominating sherry styles in this country. González Byass was born in 1855 after Robert Blake Byass, his London agent, became a partner. After Manuel’s death in 1887, the business passed onto his son Pedro Nolasco González de Soto. The Byass left the company in 1988, which is still in the hands of the González family; its current president, Mauricio González-Gordon, represents the fifth generation.

The maze of cellars, buildings and gardens that make up González Byass is spread over 374,000 m2 and is visible from several points in the city. The oldest cellar is La Constancia (1835), where founding soleras like Tío Pepe are kept —uninterrupted since 1844, when it was started by Manuel María. Also Los Apóstoles (1857) which houses a collection of 16 cherry casks from the 18th century bought form the Duke of Medinaceli.

From an architectural point of view, La Concha and Tío Pepe stand out. The first one, built to mark the visit of Spain’s Queen Isabel in 1862, is crowned by an impressive metal dome built by the Gustave Eiffel school and houses a set of casks decorated with the flags of the 115 countries where González Byass wines are exported. Under the Tío Pepe winery roof, built in the 1960s in a modern industrial style, 30,000 casks are kept in the lower levels. A huge wine tourism centre that welcomes 230,000 visitors every year —Europe’s top wine attraction— occupies the third floor.

The winery owns 800 hectares and controls another 400. Palomino rules king, but there are still some Pedro Ximénez vines —something increasingly unusual in Jerez where most wineries source this variety from the vineyards in Montilla-Moriles.

González Byass’ flagship wine is Tío Pepe (€6.95 in Spain), arguably Spain’s best known wine worldwide thanks partly to its iconic logo —a guitar-totting bottle crowned with a sombrero and a short red jacket launched on the brand’s 100th anniversary in 1935. Made from Palomino in the criadera and solera system that is traditional in the Sherry Triangle, it spends around five years under flor in American oak casks. A special En Rama version (€14,50) selected from 60 casks was launched for the British market in 2010; the wine was not filtered or clarified —the closest you could get to taste Fino from a cask without having to hop onto a plane to Jerez. It was such a success that it is now bottled every spring and sent worldwide, but it is sold out almost immediately.

The Tío Pepe solera is also used to refresh Viña AB Amontillado (€9.20), which lives under flor for four years until it fades naturally and then undergoes oxidative aging for an extra four years. The classic González Byass range is completed with Leonor (€23), a Palo Cortado launched in 2010 and with an average age of 15 years; Oloroso Alfonso (8.20 €); Néctar (7.95 €) made from Pedro Ximénez and averaging 10 years; Croft (€9.95) a Pale Cream style which is sweetened with Palomino musts and is aimed at the export market and Solera 1847 (€6.95), a sweet Oloroso made from Palomino and some Pedro Ximénez (25%).

Some of these soleras store the house’s VORS, a category set by the DO Jerez Regulatory Body for wines with over 30 years of age. Amontillado del Duque (€55) comes from the old soleras owned by the Duke of Medinaceli (which are no longer kept in old cherry butts); Apóstoles Palo Cortado (€55) which rests in an old 1862 solera started after Queen Isabel’s visit to the winery; Matusalem Oloroso Dulce (€55) and Noe Pedro Ximénez (€55) are old relics bottled in limited amounts.

González Byass is one of the few sherry bodegas to make vintage wines —those which have not been blended with younger wines in the criaderas and solera system. Each year, the winery sets apart 200 casks with high quality musts —only a small part is bottled as vintage wine.The first one in the market was 1963 and the last —a Palo Cortado which retails at €218 per bottle— dates back to 1982.

The aging potential of Palomino

In 2011, the winery launched a limited edition of Fino Palmas to “interpret the aging potential of Palomino grapes”, explains Antonio Flores, winemaker and master blender at González Byass. For the 2014 saca (release), the winery invited British journalist Jamie Goode to help Flores select out of 150 casks, those that stood out for their purity, finesse and delicate aroma. The result are four wines (priced between €12.50 to €69.75 for 50cl) ranging from six to 45 years of aged bottled en rama which are the highest expression of Fino.

González Byass is also an important brandy producer and has an in-house cooperage which sells used sherry casks to Scottish whisky houses like Macallan, where 10,000 butts are sent every year.

As part of the group’s diversification strategy, González Byass launched its sherry bar concept in London in 2010 with the opening of Pepito, a bar which has popularized the tapas and sherry drinking culture in the British capital. In Spain, the group owns several Tabernas Tío Pepe in different parts of the country.

31 wines to try in August
Tio Pepe comes of age and proves its longevity
Spain’s best somms reveal their top Christmas wines
The essential guide to Spain’s sweet wines
Sherry Festival in San Sebastián: Our top 10 wines
It comes from Jerez but… it’s not sherry!
El Maestro Sierra: a tale of courage and perseverance
A complete Sherry guide: our best articles about the region
Twenty unforgettable wines we tasted at Vinoble
Peter Liem: “Sherry is not a wine for everybody and we just have to accept that”
15 smart buys to enjoy throughout 2020
Wine selling strategies in times of Covid-19
Wine tourism opportunities in the summer of the pandemic
From our archive: a sherrylover’s guide to the region and its wines
An inspiring tasting of some rare, extremely old Sherry
The human factor in Sherry and Montilla, by Willy Pérez and Ramiro Ibáñez