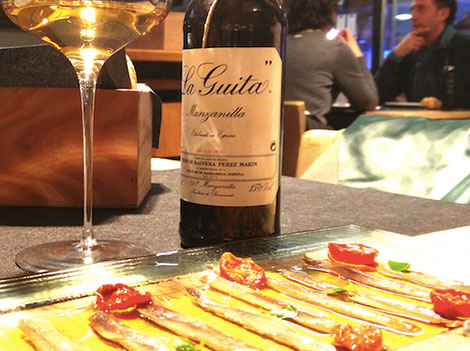 Though most people think of Sherry as an aperitif, in fact because of its distinctive and varied flavours and styles, it lends itself to pairing with any number of different cuisines and foods. Photo: Yolanda Ortiz de Arri.

To anyone who loves Sherry, it’s a constant source of bewilderment just how underestimated and misunderstood this magnificent, multi-faceted wine can be. Too many people still regard Sherry as old-fashioned, uninteresting and seriously un-cool, best left in dusty corner cabinets and reserved for elderly members of the extended family.

Luckily, Sherry has powerful allies on its side. The first is the regulatory body Vinos de Jerez, who are behind International Sherry Week, now in its third year (November 7-13 this year). The aim behind this promotion is to initiate as many people as possible into the wonderful complexity and versatility of this great drink. Throughout the week, wine merchants, chefs, sommeliers and regular Sherry lovers in 25 different countries around the world will be putting their minds to which Sherry might work with which food, and offering some creative contributions that buck the traditional trends.

Though most people think of Sherry as an aperitif, in fact because of its distinctive and varied flavours and styles, it lends itself to pairing with any number of different cuisines and foods. This very versatility is one of its strongest cards. Sarah Jane Evans MW, an award-winning wine writer with a keen interest in Sherry and a tireless champion of this fine fortified wine, comments: “Sherry goes with almost anything, and the more complex the better. There’s no simple fruit or bold oak in the wine fighting to dominate the food; Sherry is a much more complementary wine.”

Shawn Hennessy, founder of two food tour companies in Seville and a certified Sherry Educator, is yet another who believes passionately that Sherry is the most misunderstood wine in the world. “It's the variety of styles and the complexities of the wine that make it fascinating”, she says.

Starting with the lightest types, crisp, citrussy, super-dry Fino hits the spot so perfectly as an appetite-sharpener (typically with a handful of chubby Marcona almonds or Arbequina olives) that it’s easy to overlook its use within the context of a meal. Kaoru Hugel, formerly sommelier at the Mandarin Oriental in Tokyo and a fervent Sherry fan, suggests Fino as the ideal partner for a variety of robustly flavoured Cantonese dishes. One of her favourites features Fino with barbecued pork and Chinese pickles – it’s a dish that would flummox most white or red wines, but Fino’s freshness and natural acidity equips it to stand its ground with the sharply marinated vegetable pickles and helps counteract the richly glutinous barbecued meat.

Manzanilla, bone-dry with a salty tang and wafts of the sea (it’s aged exclusively in the coastal town of Sanlúcar de Barrameda, within sight of the Atlantic), works beautifully with all manner of fishy foods, including some that are quite assertively seasoned and spiced. A personal favourite of mine is Manzanilla with Mexican ceviche, where the Sherry’s fresh, saline notes cut across the rich, oily fish and avocado, and cope confidently with the lime juice, coriander and chilli marinade.

As an expatriate Brit, I occasionally hanker after really good fish and chips (not the flabby, greasy kind all too often found). Right now, I’m dreaming of a glass of salty Manzanilla with a piece of cod or haddock, crisp-fried in a light tempura batter. Even the highly salted sauces typical of Cantonese cooking are not too much for Manzanilla: take a leaf out of Kaoru Hugel’s book and serve it with stir-fried seafood with glass noodles and a spicy seafood sauce.

While Fino and Manzanilla always strike me as summer Sherries, Amontillado speaks to me of autumn, with its colour of fallen leaves and greater depth and complexity than the pale, dry sorts. By happy coincidence, autumn is the time when the unctuous Mont d’Or cheese from the Jura mountains – the one that’s so creamy you have to scoop out of its sprucewood box with a spoon – comes back into season. Put the two together and you have a cheesy-Sherry pairing made in heaven, preferably with some freshly cracked fresh (“wet”) walnuts on the side. Autumn also brings wild mushrooms: cue once again for Amontillado, with a soup of fresh ceps, perhaps, or a mushroom risotto finished with a lick of Mascarpone.

One of Seville-based Shawn Hennessy’s favourite pairings is braised artichokes and jamón with Amontillado (which she refers to as her "all-purpose" sherry) –an excellent example of Sherry’s ability to pair even with foods that are notoriously ill at ease with wine (asparagus is another). Over in San Francisco at The Treasury wine and cocktail bar, where they offer 25 different Sherries by the glass, one of their chef-calibre snacks to be served at the bar during Sherry Week is a small pot of velvety-smooth chicken liver paté with home-made pickles and quince mostarda partnered with Amontillado.

Oloroso (which translates as ‘aromatic’) is a tad darker than Amontillado, more polished mahogany than amber. Though from its deep, dark colour it looks as though it’s going to be sweet, but almost all Oloroso is dry. Always higher in alcohol (up to 20%), this is a wine for winter, when thoughts turn to log fires, roasted chestnuts – and (as far as I’m concerned) a hunk of aged, salt-speckled alpine Gruyère. Another harmonious pairing is with braised sweetbreads, with the highly aromatic dry Sherry providing the necessary contrast to the sticky sweetness of the offal.

In some cases, a Sherry that started out life as an Oloroso is then sweetened with Pedro Ximenez (see below) to give Sweet Oloroso, now officially known as Cream. This is the moment to roll out your pan-fried duck foie gras or sautéed calves’ liver (be sure to splash some into the pan to deglaze the cooking juices), where the rich, sweet notes in the Sherry work against the slight bitterness of the liver. Sarah Jane Evans thrills to the complexity of the top bottlings, served cool and matched with blue cheese – and here I would go for Gorgonzola or a creamy Stilton rather than the aggressively salty Roquefort. But chocolate, too, offers plenty of possibilities, according to Sarah Jane – “Not a bar of dark chocolate, as the tannin in the chocolate fights with the wine, but something with nuts - a craggy dark chocolate almond cluster, perhaps, or a dark chocolate Florentine - something that has the flavour clues of the Sherry itself”. And she concludes: “It’s always best to have a chocolate with texture, to contrast with the smooth Sherry.”

Pedro Ximenez, or PX, as it’s generally known (Pea-Ex being easier for most Anglophones to pronounce than the grape variety’s full name), is an unctuous, full-bodied, deeply coloured sweet Sherry made from sun-dried Pedro Ximenez grapes. Described by wine writer Hugh Johnson as a bit like Christmas pudding in a glass, this is indeed the one to pair with anything involving dried fruits and/or nuts – try it with a slice of fruit cake (and if you make it yourself, macerate the dried fruits in a splash of PX raided from the bottle, instead of the usual brandy).

You’ll often see PX in the company of chocolate – I admit when the young sommelier at wine and tapas bar MesdVi in Barcelona’s trendy Poblenou recently mooted a glass of a not-too-sticky version with their wickedly rich, velvet-smooth, dark chocolate mousse, which the chef had finished with a careless dusting of sea salt flakes, I fell hard for this awesome combination. Be careful of the style of PX, though – Sarah Jane Evans is of the opinion that “the richest PXs are so sweet, so treacly, so chocolate-y that I find them over the top with chocolate”. Her suggestion is to savour one of the top PXs alone, a little cool, with an espresso coffee.

If, after all these ideas and any others you may unearth around the world during International Sherry Week, you are still short of inspiration, Fiona Beckett, who writes on both food and wine for the UK press and is a fully-paid up member of the Sherry fraternity, has brought out an e-book entitled 101 Great Ways to Enjoy Sherry, stuffed with creative pairing suggestions. Salud – and buen provecho!

“Sherry has been badly mistreated”
Tio Pepe comes of age and proves its longevity
Top sherry wineries and tapas in El Puerto and Sanlúcar
Bodegas and tapas welcome visitors to Jerez
Southern treasures (I): Manzanilla
Southern treasures (II): Pedro Ximénez
Sherry 101: An introduction to styles and pairings
Sherry Festival in San Sebastián: Our top 10 wines
It comes from Jerez but… it’s not sherry!
El Maestro Sierra: a tale of courage and perseverance
Callejuela: countryfolk bottling terroir in the Sherry Triangle
A complete Sherry guide: our best articles about the region
Drinking sherry history at Emilio Hidalgo
From our archive: a sherrylover’s guide to the region and its wines
Barbadillo or the courage to tackle changes
A winegrowing Noah's Ark on the Añina vineyard in Jerez