1. Alberto Orte at Finca El Aljibe in Jerez 2 and 3. The winery seen from the San Cristóbal vineyard 4. Vines in Añina 5. Bodegas Poniente wines 6. Layer of flor in the amontillado 7. Albariza from Añina Photos: Yolanda O. de Arri and Alberto Orte

In San Cristóbal, as in the rest of the vineyards of Pago de Añina in Jerez, the whiteness of the albariza soils is interspersed with the green of the plants in spring and summer. At first glance there are no major differences between them all, however, the vines surrounding the vineyard house that Alberto Orte and Patrick Mata have lovingly restored in San Cristóbal are not the same as those of the neighbouring estates.

Grown organically, San Cristóbal was the first of the 16 hectares of vines that both partners and owners of Compañía de Vinos del Atlántico and Bodegas Poniente in Jerez, as well as the importer Ole Obrigado in the United States, planted in 2011 in the Cádiz province. 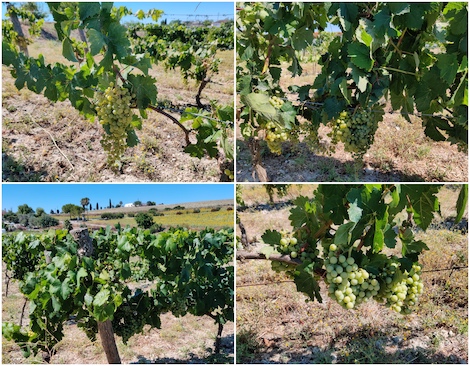 In addition, they also work with more than 200 clones of Palomino Fino and Palomino de Jerez. "We took them from old vines here, but also from Trebujena, Galicia, the Canary Islands and the south of Portugal," says Orte, who employs six people in the vineyards. "Ninety percent of the plant material planted nowadays in Jerez comes from commercial selections from Rancho de la Merced. Generally, these vines have much higher yields and vigour than ours here".

In addition to this sort of grape-growing Noah's Ark that is San Cristóbal, Orte and Mata have two more plots in Añina, called San José and El Aljibe. All of them are planted with aromatic plants and fruit trees in the vicinity, farmed organically using methods of sexual confusion against pests and are tilled only once after the harvest.

They also leave green covers —an unusual practice in the Jerez region— without agostado, a traditional practice that is now mostly done with machines and which consists of turning the soil about 60 cm to oxygenate and fertilize it. "It was an agronomic decision to avoid soil erosion," explains Alberto, who has dug out pits and carried out analyses on his vineyards to find out more about the penetration capacity of the roots depending on the different types of soil. "Drought also has a greater effect on the plants when mechanical agostado is employed. I think there is no choice but to return to the vineyard to understand the essence of our grapes and soil management.” 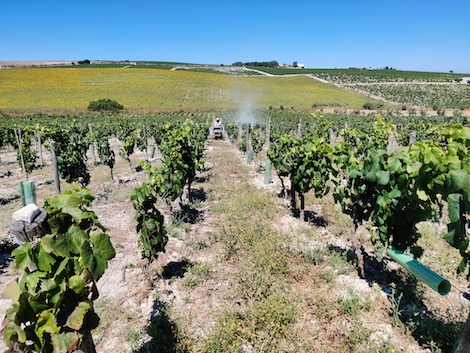 The idea is to study the behaviour of the two dozen varieties they grow —when ripe, they are a bounty for rabbits, snails and birds— and make new wines with them. At the moment they produce two on three wines: Vijiriega, with their elegant Atlántida white, and Tintilla, with Vara y Pulgar, and the more concentrated Atlántida red, made partially with purchased grapes. They are working on anew blend with Tintilla, Palomino Negro, Jaén and Melonera, which is aged in concrete. They all come under the umbrella of Vinos de la Tierra de Cádiz and a large part of the production is sold in the United States, where the Spanish-Belgian Patrick Mata lives and manages the group's sales and marketing.

Friends since university, where they met while studying law, Patrick and Alberto started out in 1999 as agents with just three Spanish wines in their portfolio. They eventually set up their own import business, Ole Imports —now Ole Obrigado, following the incorporation in 2018 of Rui Abecassis' Portuguese wine firm— and the new distribution company in New York and other states on the US East Coast where they sell the wines that the group vinifies and ages in Jerez as well as those that Alberto Orte makes in various regions of Spain and those of 40 small producers on the Iberian Peninsula that they represent.

The wines of Cía del Atlántico are vinified in a modern and functional winery in the San José vineyard, visible from the mother field of varieties. Its exterior, a concrete cube with curiously misaligned windows, contrasts with the stately El Aljibe estate on a hill on Pago Añina, where the ageing cellar for the fortified wines is located.

Alberto enjoys the peace of this place surrounded by trees and vineyards. Born in Madrid, he studied a master's degree in viticulture after setting up Ole Imports, but fortified wines are in his blood, having spent many childhood summers in Montilla. In fact, he descend from the Velasco Chacóns, a winemaking family from Montilla, and he shares a great-grandfather with Miguel Puig, from Lagar de la Salud.

In 2015 Alberto had the opportunity to buy used large wooden casks called bocoyes and old wines from a cellar that was being dismantled and with them he started the soleras of the four El Aljibe wines —a Fino, an Amontillado, a Palo Cortado and an Oloroso— named after the Jerez estate. All of them are made under the Bodegas Poniente brand. Of these limited edition wines, which were first marketed in 2019, a single annual saca en rama is made. The fourth and final criadera of fino El Aljibe is refreshed with Palomino Fino and Palomino de Jerez musts from the Añina vineyards. These grapes are harvested at 13.5-14 degrees, so that the fortification is lighter, and acidified with half a gram of tartaric, a common practice in the Sherry region. All the grapes at Bodegas Poniente are trodden with the feet in open vats and the wines are fermented in barrels with indigenous yeasts. 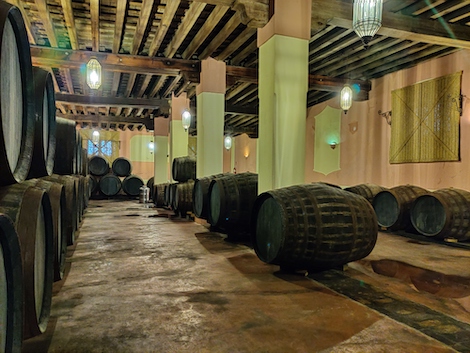 This Fino in turn feeds the sixth criadera of the Amontillado VORS, which is about 40 years old on average. With 21% alcohol and still some flor on its surface, this wine is not refortified and its concentration occurs naturally, which is why the 200 litres that make up the annual saca have a piercing, saline quality. Other wines such as the Oloroso VORS, which is aged in 1,500-litre bocoyes to achieve a slower evolution and greater elegance, or the Palo Cortado VORS, also over 30 years old on average, are refreshed with the finest wines from the group's vineyards.

Both in Bodegas Poniente's fortified wines and in the white and red wines from Cádiz or those that Alberto Orte produces with grapes bought in Rioja, Valdeorras, Rías Baixas, Yecla and other Spanish appellations, the motto is always to look for consistency so that the market doesn't penalise them. “The Italians know that they are beholden to their customers, but in Spain we are sometimes distracted and have forgotten our traditional long-aging of wines,” says Alberto, who regrets that the countryside was also neglected. "Producers became financial companies buying grapes first and then wine, but success means going back to the vineyard to understand the soils and the grapes and rediscovering genetic diversity".

Unfortified whites from Jerez: back to the roots and the soil
Is Sherry the most versatile wine in the world?
Peter Liem: “Sherry is not a wine for everybody and we just have to accept that”