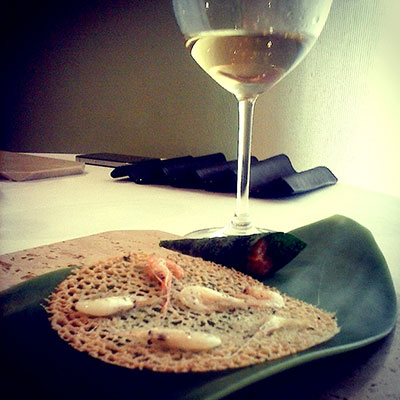 The economic turmoil seems to have passed by Ángel León’s restaurant without knocking on the door of the space he opened almost a decade ago in a quiet street of El Puerto de Santa María, in the Sherry Triangle in southern Spain.

His dishes are all seafood- and fish-based and his idiosyncratic style fascinates both the general public and the critics who travel to the historic 17th century tide windmill where Aponiente has now moved and where he has just been awarded a third Michelin star (November 2017).

The Chef del Mar (Sea Chef, as he is known) wants to go beyond the recognition he has achieved in his hometown and recently opened Bistreau, a new restaurant within the Mandarin Oriental hotel in Barcelona. This is his first foray into the big gastroworld outside his Cadiz Bay base, which has traditionally served him as pantry and defines his cooking style. He maintains three restaurants there: the first Aponiente restaurant is now an informal but top class tapas bar, called La Taberna del Chef del Mar -run by his wife- and his recently opened Alevante, in near Sancti Petri, where he has also been awarded a Michelin star.

At Aponiente, eating becomes an unforgettable experience. León surprises with his original style, technique mastery and deep knowledge of a sea that is served on diners’ plates. Along with his crew, León is a staunch defender of sustainable fishing and prepares ingenious dishes with cast-offs and unappreciated species such as mackerel, leatherfish or sarda (a type of tuna), with which he makes a marine miso cheese. The menu also includes plates based on ingredients like algae and plankton -he is a renowned expert in them- as well as traditional offerings such as the humble but elegantly presented and delicious shrimp omelette.

There are two options to choose from: the Grand Menu, with 18 dishes and three desserts, priced at €215; and the Mar en Calma (Calm Sea) Menu, with 15 main dishes and two desserts for €195. Both can be paired with the wines offered by a team of sommeliers, including Lucía Fuentes who also makes wines locally under the brand 4OjosWines.

Some of the wines they offer have been exclusively bottled for Aponiente, such as Yodo Fino en Rama by Lustau or another by Gutiérrez Colosía, one of the few wineries that still produces and sells its own wines in El Puerto; others are oenological jewels, hard to get hold of them outside the Sherry Triangle, such as Manzanilla Pasada Barbiana. The rest are some of the greatest from the area, such as Ximénez Spínola 2013, a vintage Pedro Ximénez wine aged for three months and with no added alcohol (unlike what is customary) which is a great unknown and deeply intriguing sherry. These and the rest of the wines in both menus -all of them originating from the Sherry Triangle or from local Tierra de Cádiz vineyards- show a great capacity to match the creative talent displayed at Aponiente, which brings a different view of the sea. Nobody remains indifferent to Chef del Mar’s gastronomical ripples. Y.O.A.

Top sherry wineries and tapas in El Puerto and Sanlúcar
Spain’s best somms reveal their top Christmas wines
“Sherry has been badly mistreated”
A complete Sherry guide: our best articles about the region
Which Spanish wines are chefs into?