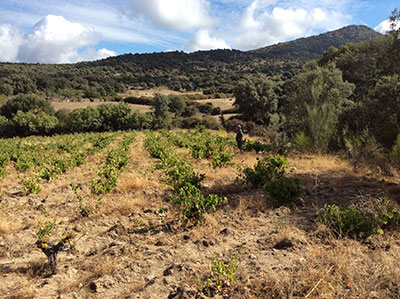 Belarmino Fernández’s family owns Asturianos, a well-known restaurant for wine lovers in Madrid, so it’s no surprise that he took the leap into winemaking. In 2003 he established Bodegas Canopy with winemaker Alfredo Chacón after discovering old Garnacha vineyards in El Real de San Vicente, the northernmost village in DO Méntrida (Toledo) and the only one in the appellation within the Gredos mountains in central Spain.

In order to produce their wines, they rented a space at Jiménez-Landi’s family winery in Méntrida and eventually introduced them to this distinctive area. Today it is commonly accepted that Telmo Rodríguez opened up the gateway to Gredos’ northern area around the village of Cebreros in Ávila and that Canopy led the way to the area’s southernmost vines in the Tiétar valley.

Canopy currently works 19 hectares, of which 12.5 are their own; 40 to 90 year-old Garnacha vines are planted on granite soils in El Real de San Vicente, with some 16 to 20 year-old Syrah vines grown further south in the village of Camarena, where Alfonso and Belarmino eventually built their winery. They also own a steep, 80 year-old Garnacha vineyard in Cebreros (Ávila), the only area, along with El Tiemblo, where schist soils can be found in Gredos.

Passion rather than money drives this irreverent and unconventional duo. They don’t make a living with their wine, they say. While Belarmino has the family restaurant, Alfonso owns a hotel business but he devotes 70% of his time to the vineyards, an activity he describes as “the best occupational therapy”. There’s no need to use alternative vine growing methods like biodynamics, he says. “We can make honest wines in Gredos; we only need what nature gives us. Soils, landscape and Garnacha’s clonal diversity are really interesting. You get wines that smell of thyme, lavender… the kind of plants that grow around here”, he adds.

Except for their entry-level red and the white, all of their wines ferment with whole bunches and are foot-treaded. Winemaking is as natural as possible and small quantities of sulphur are added after grapes are picked and before bottling the wines.

Total production accounts for roughly 45,000 bottles with half a dozen different wines. The entry-level red Castillo de Belarfonso (€9) combines the names of the owners and irreverently depicts a bouncy castle on the label. Few wines at such a price show as much terroir as Castillo de Belarfonso. The next one up is Tres Patas (€14, 12,000 bottles), another Garnacha from El Real de San Vicente that ferments with stems. Malpaso is a single-varietal Syrah; grapes are sourced from further south in Camarena. This red has evolved towards a fresher, juicer style, making it a fruit-driven, easy to drink wine that will surely appeal to many consumers.

The single-vineyard range starts with the fine, evocative Garnacha La Viña Escondida (€25, just over 2,000 bottles). First released with the 2007 vintage, it comes from a “long, narrow and wild” vineyard as Alfonso Chacón puts it —as much as 30% of its grapes have been occasionally eaten by wild boars. In contrast, Kaos (€32) is warmer, with a flinty minerality in tune with Cebreros’ schist soils. Congo, a red wine sourced from a small vineyard in El Real, will soon be discontinued in an effort to reduce Canopy’s portfolio. This won’t be case for their white Garnahca Loco (€19, just 1,500 bottles). Grapes are sourced from very old vineyards in Camarena often intermixed with other grape varieties and from white vines scattered within red plants. Its packaging couldn’t be more striking —the bottle is dressed with a straightjacket meant to go hand in hand with its name (“loco” means crazy). It can hardly go unnoticed.

The breathtaking beauty of Gredos in pictures