Winery Zárate Rías Baixas | Spanish Wine Lover ﻿
This site uses cookies. By continuing to browse the site you are agreeing to our use of cookies.Cookies policy hidden 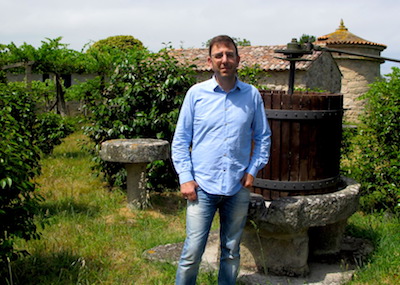 Located in Meaño, in the Salnés Valley, Bodegas Zárate pioneered the production of quality Albariño in the 1950s. Ernesto Zárate launched the Albariño Festival in Cambados and after winning the first prize to the best wine for three consecutive years (1954, 1955 y 1956) he decided to withdraw until another producer equalled his triumphs. To this day no other winery in Rias Baixas has managed to secure three victories.

Eulogio Pomares is the seventh generation to continue with the estate’s wine tradition. At the helm since the 2000 vintage, Pomares studied in Bordeaux before joining the family business, based in a beautiful stone mansion house built in the 16th century and surrounded by vineyards.

His main concern are Zárate’s 10 hectares under vine split into 14 plots, with an average age of 35 years, although there are very old vines whose grapes are destined to the winery’s limited productions. Albariño, Loureiro, Espadeiro and Caíño are planted on granite soils in Sisán and Padrenda and have been gradually converted towards sustainable and biodynamic practices.

At Zárate, treatments are exclusively based on phytotherapy, sulphur and copper, with no insecticides on sight. Soils have not been tilled since 1994, which in turn has made leguminous plants and native flora bloom bringing natural balance back to the soil. The oldest ungrafted vines are used by Pomares to do a masal selection for new plantings.

The same philosophy is applied at the winery —little intervention and the aim to make long-lived wines which express the terroir where they come from.

The range of Albariños starts with Zárate (60,000 bottles, €10.45), a fresh and fruity white which is kept on its lees for three months and comes from 11 plots where the average age of the vines is 35 years. Zárate Balado (2,700 bottles, €20), kept with its lees for six months, is born from two plots which were replanted on ungrafted vines in 1950 encircled by a granite wall (in the local Galician language, “balo” means wall). Zárate El Palomar (2,660 bottles, €22) is a wine with cellaring potential which ferments in oak vats and comes from ungrafted vines in one of the oldest vineyards in Rías Baixas, next to the winery. It is kept on its lees for 30 months without batônnage; it doesn’t undergo malolactic fermentation. Zárate Tras da Viña (2,400 bottles, €18) is another of Zárate’s classics. It comes from a sandy plot which was replanted in 1970 with buds from El Palomar vineyard; it’s a wine that proves the cellaring potential of Albariño.

Although productions are limited, reds are an important part of Zárate’s identity. The winery has been at pains to recover the region’s heritage of red grapes, which were widely planted in older times. Around 600 bottles of Zárate Espadeiro and Loureiro (€21) are released every vintage and about 1,200 of Zárate Caíño (€21). These three wines are aged in 500-litre oak vats for 12 months, where they undergo malolactic fermentation. They are wines with marked acidity but with a fresh and elegant character, worth trying for their singularity.

These red varieties also help Pomares to make his first rosé called Fontecón (1,000 bottles, €20.50) which blends 60% red Caíño with 20% Espadeiro and the same amount of Albariño grapes grown in Fontecón, a single vineyard in Pradenda. After bleeding, the Caíño and Albariño, both de-stemmed, ferment with their lees in a stainless steel tank for three months while the Espadeiro bunches are pressed whole and kept in French oak for three months with their lees before being blended with the other two varieties.

In 2012, Eulogio Pomares launched Fento Wines, his own personal project outside of Zárate. Under this umbrella he makes five wines —Fento Blanco, Fento Tinto, La Liebre y La Tortuga, Bico da Ran, La Galaxia and Xabre— sourced from a vineyard owned by his wife Rebeca, who also works at Zárate, and from small growers in the Tea subregion, to the south of Rías Baixas, and from Ribeira Sacra for Xabre.

Eulogio Pomares' innate curiosity has led him to launch his most personal range of wines, all outside the DO regulations, with two distinct categories and limited productions: Parecelarios (single-vineyard wines) and what he calls Grandes Vinos Desiguales ( Great Uneven Wines). His single vineyard range includes Penapedre, a field blend of vines over 150 years old in Esperón (Ribeira Sacra), Carralcoba Tinto, a 70-year-old Caíño from Castrelos aged in chestnut foudres, and Carralcoba Blanco, an Albariño from the same vineyard as the red planted with the layering technique. His Vinos Desiguales are three Albariños: Crianza Oxidativa, made from grapes harvested in December and aged for 36 months; Maceración con Pieles, an orange wine macerated for two weeks with the skins and 60 Meses, aged for five years in the bottle.