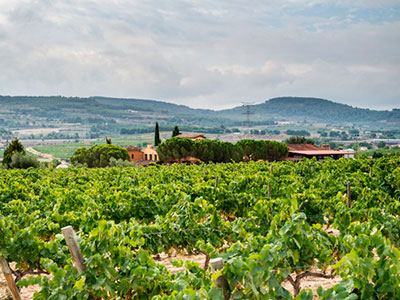 Located in Penedès, the Sabaté i Coca estate stretches along the Bitlles valley between the villages of Torrelavid and Sant Pere de Riudebitlles. Brothers Josep and Marcel, winemaker and alma mater of the project, are the fourth generation of winegrowers and currently run the estate. Their father Marcelino, a former sharecropper, was the driving force behind the modern winery and transformed the ancient winemaking facilities in the masía (Catalonia’s traditional farmhouse), dating from the 18th century, into a wine museum.

At the beginning of 2019 they left DO Cava along with the sparkling wine producers from Penedès that were memebers of Corpinnat. The brand Corpinnat was presented in April 2018 as a new EU-registered, private certification that championed terroir in Penedès with stricter quality standards than those set by the DO Cava.

The family only use their own grapes to make sparkling and still wines. The latter are under the umbrella of the DO Penedès. They grow 40Ha organically with up to 18 different types of soils and 66 plots which are fermented separately. Soils have been formed by the accumulation of ancient sediments over a chalky crust with abundant carbonate nodules.

Production totals 200,000 bottles, 70% of which are sparkling. Around 65% is sold abroad. The sparkling wines have no dosage added and most cuvées include the date of disgorgement. The range includes different blends of Penedès’ traditional indigenous trio, Macabeo, Xarel.lo and Parellada, under the Castellroig brand: Brut (35,000 bottles), Brut Nature (25,000 bottles, €10) and Reserva (20,000 bottles, €12). Their rosé is made from Xarel.lo Vermell with small amount of Garnacha (€15.5) while the one that is aged for 36 months (6,000 bottles, €15.5) is a blend of Xarel.lo and Macabeo.

Their premium range is called Sabaté i Coca and includes a long-aging sparkling wine made from Xarel.lo and Macabeo in magnum (only 700 bottles, €35) and the Reserva Familiar (60 months of aging, €30, 6,000 bottles), a single-vineyard, single-varietal Xarel.lo sourced from two of the five hectares in the Terroja (red soil) vineyard. The soil presents a high concentration of iron over a chalky crust going 80cm deep with abundant carbonate nodules.

The range of still wines belonging to the DO Penedès includes different single-varietal Xarel.lo whites, two reds and one rosé made from Ull de Llebre (Tempranillo). Terroja de Sabaté i Coca (around €22 in Spain) is their top white. Grapes are sourced from the same vineyard used for Cava with more extended aging times.

Wine tourism is particularly important at Castellroig and goes well beyond the standard wine tour. Visitors can take part in winemaking and vineyard tasks, tour the vineyards on off-road vehicles and match wine and food (Xarel.lo with cheese, rosé fizz with chocolate or cured Iberico pork products) or wine and music. The numerous activities they run are published on their website.

Cava finally linked to terroir with 12 new 'grand cru’ sites
Corpinnat opens the way to private designations in Spain
Corpinnat leaves DO Cava. What comes next?