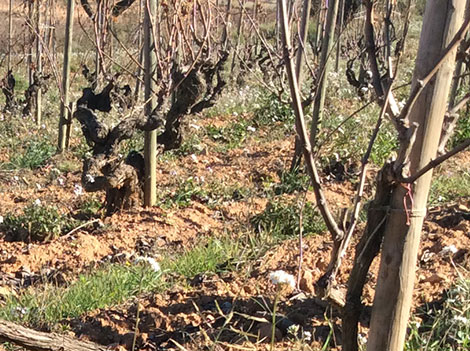 After a long wait, the first single-vineyard, grand cru Cavas (cavas de paraje calificado, CPC) were announced last week. For the first time, the new premium classification links Spain’s well-known sparkling wine to terroir. (Below is the list with the 12 single vineyards and 15 Cavas —some plots produce more than one wine). In this article published last year in SWL we thoroughly explained the details of the category and the main issues discussed during the development process.

Consumers are likely to find the first CPC bottles by September. That is the date Jaume Gramona, president of the company bearing his surname, plans to release the new 2002 vintage of their top Enoteca, as well as relabeled bottles of Celler Batlle 2006 and III Lustros 2009 which are already on the market.

In October, Vins el Cep and Alta Alella will release Claror 2012 and Mirgin Vallcirera respectively. Codorníu will follow with the 2009 vintage of La Fideuera, La Pleta and El Tros Nou. This historic Cava producer boasts three CPCs sourced from three sites followed by Recaredo with two while Gramona and Torelló have entered the premium category with one single site each and three and two wines respectively.

Only three CPC feature international grape varieties: La Pleta (Chardonnay), El Tros Nou (Pinot Noir) and Mirgin Vallcirera, a blend of Chardonnay and Pansa Blanca, as Xarel.lo is locally called in Alella. These are the only three cavas sourced from wine regions other than Penedès: Segrià-Costers del Segre (Lleida) in the case of La Pleta, Conca de Barberá (Tarragona) for El Tros Nou and Alella (Barcelona) for Mirgin Vallcirera.

Turning around Cava’s image –and prices

Pedro Bonet, president of Cava’s Regulatory Board, firmly believes that CPC will help to improve the image of Cava as well as to raise prices for the category as a whole. Bonet points to the increased visibility that single-vineyard Cava will have in the market: “All of them deserve to fetch higher prices and the new category works in this direction —allowing top Cava to compete evenly with top quality Champagne.” Retail prices in Spain for CPC vary from €28 for Claror (Vins El Cep) or €30 in the case of Castellroig’s Sabaté i Coca Reserva Familiar to €100 for Recaredo’s Turó d’en Mota and €130 in the case of Gramona’s Enoteca.

Bonet says that there has been a polarisation in recent years between premium and low-cost products. Driven by merchants’ own brands, cheap Cava has performed extremely well during the economic downturn. “But recession has also pushed companies to look for new markets and today 130 producers sell Cava abroad.”

According to the president of the DO Cava, “the announcement of the new CPCs seems to have inspired many producers who are now willing to follow this path.”

Francisco González, technical director in the Cava Regulatory Board, admits to being overwhelmed by enquiries and potential applications but warns: “Some producers see the CPC category as a marketing tool that can be easily obtained.”

Apart from fulfilling a large list of requirements (vines over 10 years old, grapes harvested by hand, 36 months aging…), producers must submit a detailed technical report proving the singularity of their “paraje” followed by the approval by a tasting committee with Spanish and foreign wine experts including several Masters of Wine.

The main barrier comes from the fact that producers applying for the category must vinify 85% of their base wines. This is the reason why Sumarroca’s excellent Xarel.lo Homenatge Núria Claverol Finca Paretes has not been accepted in the CPC category this year. Despite owning almost 300Ha of vines, extremely low yields in the 2016 vintage forced Sumarroca to buy over 15% of base wines in order to meet their sales needs. Among the largest producers being awarded the CPC distinction, Codorníu’s winemaker Bruno Colomer assures that this historic house meet this requirement, while in the case of Freixenet, Casa Sala operates separately and is a company in its own right.

Quality has never been questioned. The tasting committee met for a second time at the end of May to taste the new vintages of the first CPCs and other wines from producers willing to join the new category. According to one of its members, Spanish Master of Wine Pedro Ballesteros, “most wines were rated 9+ out of 10. In terms of singularity, it wouldn’t have been neither wise nor fair to establish a CPC style profile, thus all members agreed that diversity should be an additional element in the wines.” The main issues that define the style are grape varieties, the use of oak, oxidation and dosage, Ballesteros added.

The concept of 'paraje'

The approval of the first CPC by the Spanish Ministry of Agriculture has helped to define the concept of “paraje”. Established originally as one or several plots within a “smaller area” with a singularity of its own, the size of the first 12 parajes ranges from 1.2Ha in Alta Alella’s Vallcirera to 23Ha in the case of Can Martí from Torelló.

For the time being, none of the requests demanding the acceptance of separate vineyards with common soil and climate features –like Recaredo’s paraje for their Reserva Particular– have prospered. Nevertheless, Bruno Colomer from Codorníu hasn’t given up hope of achieving the CPC status for the top-of-the-range Ars Collecta 456, a blend of their three single vineyards: La Pleta, La Fideuera and El Tros Nou. “We’re working towards the possibility of including a blend of parajes as a single CPC in the future,” he said.

As expected, news of the first CPC were received enthusiastically by those who think that the category will raise Cava’s profile as a whole and with caution by those wishing for deeper, structural changes like Recaredo’s Ton Mata. He advocates for establishing subareas in the appellation and distinguish between winegrowers, producers purchasing grapes and those who just buy wine following the model of Champagne.

We asked Pedro Bonet if the new CPC category linking Cava to terroir for the first time could help to redefine the boundaries in such a vast appellation spanning different locations across the country. “Zoning has always been on the table but it’s not easy; further discussion is needed,” he says.

For Pedro Ballesteros MW, the CPC classification “moves things in the right direction, although it still fails to provide a useful framework to independent quality winegrowers like the one recently approved in Bierzo.”

It’s not a coincidence that in the space of a few weeks Rioja has approved the single-vineyard category, Bierzo has announced its Burgundy-inspired classification and the new CPCs have been announced. Spanish producers are trying to equip themselves with tools capable of adding value to their wines and raise prices in export markets.

What’s all the fuss about Cava?
Does terroir matter in Spain's appellations?
Bierzo approves a Burgundy-inspired classification
Further steps to demarcate terroir in Spain
Cava brings a sparkle to the US craft-cocktail movement
A MW research paper on wine classifications in Spain
Cava de Paraje Calificado - what’s it all about?
Corpinnat opens the way to private designations in Spain
The challenges ahead: “Rural areas, medium-range wines and the cultural sphere”
Corpinnat leaves DO Cava. What comes next?
Introducing Rioja’s first Viñedos Singulares
Álvaro Ribalta MW gets to grips with sparkling wines from Penedès
Two dozen sparkling wines to enjoy this Christmas
Mestres: the long-ageing bodega that has always championed Cava