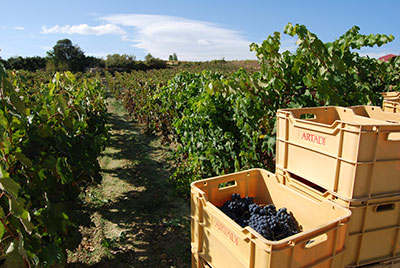 Artadi is key to understand the transformation of Spanish wine in the last decades as well as one of Rioja’s and the country’s quintessential icons in terms of quality, even after it left the Rioja appellation in December 2015. From this date, any wine bottled at their facilities does not carry the Rioja seal; instead, they are "wines without DO" with both vintage and grape varieties certified by Bureau Veritas Iberia, an official body accredited by ENAC.

Located in Laguardia (Rioja Alavesa), it has faultlessly risen from being a cooperative making traditional young wines for the local market to becoming a winery producing an impeccable range of wines based on terroir and vineyards. The man behind this transformation is Juan Carlos López de Lacalle, a highly respected personality in the world of Spanish wine. His obsession with quality led him to explore the potential of terroir and to vinify separately the old cooperative vineyards based on their soils, aspects and altitudes. The winery owns 85 hectares of vineyards entirely devoted to Tempranillo for the reds.

Artadi pioneered the move to discard the traditional Crianza category and highlighted the importance of vine age on its Pagos Viejos, the winery's first great red wine produced since 1990 (around €70). Since 1991, Viña El Pisón, arguably Artadi's most important vineyard, has been bottled separately (€200-300 depending on vintage). Located in Laguardia, El Pisón occupies 2.4 hectares of vines planted by Juan Carlos' grandfather in 1945 and is the equivalent of a Grand Cru in terms of personality, extraordinary qualities and aging potential. Few wines are capable of expressing the energy that emanates from El Pisón.

As well as its top range, Artadi makes affordable references for wine lovers such as Artadi Joven, a traditional young cosechero red (€9) and Artadi Tempranillo, aged in oak barrels for 12 months (€12). But the label which faithfully reflects the landscape of Laguardia at an affordable price is Artadi Viñas de Gaín (€18). Made from 20- to 30-year old vineyards, it shows the characteristic vibrant red fruit from this area, as well as a special firmness and volume, both trademarks of this winery. Inquisitive wine lovers will be happy to know that Artadi also produces Viñas de Gaín white made from Viura, Rioja's traditional white grape and an original sparkling wine with Hondarrabi Zuri grapes in Zarautz (Basque Country).

Juan Carlos' son Carlos is part of the next generation and is already at work in the winery. Artazu has been Artadi's base in Navarra since 1996 and it is present in Alicante since 1999 with El Sequé. Visits to the winery are allowed on request.

Does terroir matter in Spain's appellations?
US wholesalers warm up to Spanish wines
A group of Rioja Alavesa producers apply for a new DO
Spanish wine growers: first steps towards excellence
Spanish wines break through the glass ceiling
Eight producers reveal their Spanish wines for Christmas
Recent tastings: Bubbly and Rioja
What do critics really value in Spanish wine?
Rioja in the 21st century: styles and categories of wine
Txakoli: a guide to producers and wines