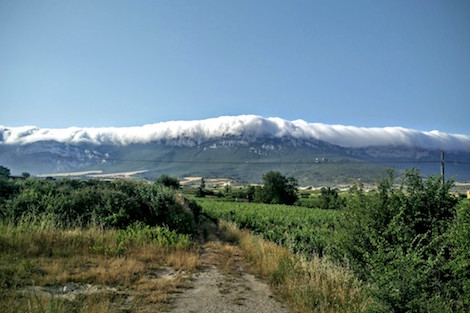 This news piece was updated on August 3rd 2016

As half of Spain is packing suitcases to go on holiday, the Association of Rioja Alavesa Producers (ABRA) dropped the wine story of the summer with the announcement that it has commenced procedures to create the new appellation Arabako Mahastiak / Viñedos de Álava.

A statement issued by the association, which represents 126 wineries producing 30m litres of wine per year, said that “the final aim is to offer a new framework, which is open to the whole sector, and a differentiating option where consumers can make an informed choice within the boundaries of Álava”.

Inés Baigorri, director of ABRA, has told Spanish Wine Lover that the decision to hand in the new DO paperwork at the Basque Government, which is the first level of authority to decide its viability, is the culmination of almost three years of work.

“The new rules and regulations in terms of vineyard plantings and other factors are a threat to our business model and make it difficult for us to differentiate ourselves and seize opportunities. Thus, with the mandate from the Assembly and the support of over 40 producers, the association decided to pursue the viability of a new sphere of protection for our wines”, added Inés Baigorri. “This project does not aim to cause a rupture; it is a means of survival where individuals with very different political ideas and business plans want to fight for their territory”.

The solicitation documents have been filed at the Basque Government. Once they are published in the official Basque Country Gazette, there will be a two-month period to submit objections before the documents are sent to the Spanish Ministry of Agriculture, which will then forward them it to the European Union for its final approval.

Inés Baigorri is upbeat and estimates that, “provided there are no major obstacles” there could be some advances in the next six months to a year. “We are backing our claim with plenty of work in terms of agronomy and history to avoid objections, although we know they will be inevitable”.

Faced with the question of how they will prove the singularity of an Alavesa area such as Samaniego against neighboring villages such as Ábalos, which are ruled by the government in Logroño, the manager of ABRA adds: “The administrative issue should not stop us; this is the reality we live in and we must accept it. We must also take into account that there are many historical differences dating back centuries. What is clear is that the current situation is damaging our businesses”.

The draft legislation presented before the Basque Government envisages stricter planting densities (6,000 vines/Ha against 10,000) and yields (6,000kg for reds and 8,000kg for whites against 6,500kg and 9,000kg respectively) than in the DOCa Rioja, compulsory manual harvests, the protection of the environment and the prohibition of outside grape varieties such as Chardonnay, Sauvignon Blanc and Verdejo, accepted in the Rioja legislation.

Although specific categories for village and single vineyard wines are not included, the draft mentions a “label for wines made from own vineyards” and specific locations based on their traceability. Labels will also be allowed to carry the word Euskadi (Basque Country), which could eventually lead to a common umbrella for all Basque wines, including txakoli from the three Basque appellations.

Inés Baigorri explained to SWL that producers in the new DO Alava would be able to state aging Crianza, Reserva and Gran Reserva times on the labels albeit "not as a category in itself”. For the manager of this Alavesa association, the legislation aims to be “less constrained but more demanding”.

Reactions in the DOCa Rioja and Álava

This new DO for Álava, which according to ABRA will be opened to the whole region, does not count with the support of cult producer Artadi, which abandoned the DOCa in December 2015 to set up its own project to make terroir wines in Laguardia.

“If the DO Viñedos de Álava finally goes ahead, Juan Carlos [López de Lacalle] might be interested in joining although he initially rejected to take part in the project, which existed before he left the DOCa Rioja”, adds Inés Baigorri.

According to local blog Dastatu, the owner of Artadi is said to have “caught his breath” after hearing the news of a new impulse for a new DO in Álava, which also has the support of the local Basque authorities, albeit with some reservations. “This group of wineries and producers, like every other, count with the support of the Diputación Foral de Álava [the region’s authority] if that is the right decision for their business model”, declared its leader Ramiro González, but he added: “The best solution for the region is to have its own appellation within the Denomination of Origin Rioja. Nobody questions the need for differentiation but we musn’t give up the name Rioja, which is also ours”.

Such eventuality is out of the question for the DOCa Rioja authorities. Despite yesterday’s meeting with ABRA was “relaxed”, according to Inés Baigorri, and helped to officially explain the decision, the general director of the DOCa Rioja, José Luis Lapuente, said ABRA’s initiative, which he first heard of through the media, was “unfathomable”. He added: “I don’t know what is their goal. On the same day we heard the news we discussed a proposal to address issues like local wines and single vineyard wines in which they intervened and brought up some ideas. They are acting disloyally; the DOCa Rioja has given strong signals to show that the momentum has not stopped. There are rules of the game here so you cannot play with two decks of cards”, explained Lapuente.

For the time being, the Rioja appellation does not envisage presenting objections to the new DO project because they prefer to wait and see what happens next, but Lapuente warns: “We have only seen three paragraphs on a piece of paper presented by a small group, but we will act of it affects the DOCa Rioja or its 16,000 wine producers in any way”.

Leading producers fail to back the move

The names of the 42 wineries which have backed the creation of Arabako Mahastiak / Viñedos de Álava have not been announced in order to avoid problems —to date, all the producers in ABRA are still part of DOCa Rioja. But renowned producers such as David Sampedro (Bhilar), Roberto Oliván (Tentenublo), Remírez de Ganuza or Arturo and Kike de Miguel (Artuke) have said that they are against breaking up with the DOCa Rioja —in their view, a division based on administrative matters will not bring a differentiation.

“I am grateful for the great efforts and the hours of work invested to pull this project ahead, but I am disappointed. The new plan focuses on a mini DO with a similar situation to what we have now, but smaller in size", explains Arturo de Miguel, who owns 40% of his vineyards in Ábalos, just outside the Alavesa side but with very similar characteristics to other vineyards in the Sonsierra foothills. “The initiative only mentions administrative borders, but nothing about quality. I think this should be an opportunity to classify soils, starting from the fact that villages like, say, Oion has little in common with Labastida or Ábalos. ¿Why don't we discuss setting up a private body, similar to Germany's VDP, based on quality and away from political interference?”

According to law expert Jordi Sabaté, who has been present at today's meeting with ABRA members, the draft regulation cannot include so much detail but he did not rule out that the future regulation could include such classifications.

Despite that only a minority of the members support the initiative, Inés Baigorri  is not afraid of disfranchising some of the ABRA members who are skeptical about this new DO. “Our priority is Rioja; DO Viñedos de Álava is just another project, like our joint purchasing centre or many others. We work very hard on the sidelines”.

As wine consumers around the world demand unique and singular products, the Association of Rioja Alavesa Producers (ABRA) has been working on various proposals to classify and highlight the inherent singularities of Rioja Alavesa wine region.

One of these proposals has resulted in the decision, spearheaded by over 40 producers in the association, to create a new protected area for the wines made in the area of Laguardia-Rioja Alavesa and the search for alternatives to guarantee the future of their businesses, respecting their singular business model, respecting the vineyard and the region’s history.

In July 2016, the Basque Government, as the competent authority, has received the documents requesting the necessary administrative formalities to set up the Protected Denomination of Origin “Arabako Mahastiak / Viñedos de Álava”.

The final aim is to offer to the whole trade sector a new differentiated framework, where consumers can freely can make an informed choice of what lies within the boundaries of Álava.

Does terroir matter in Spain's appellations?
La Rioja Alta: The greatness of Gran Reserva through the decades
Further steps to demarcate terroir in Spain
A new generation of brave producers in Rioja (and II)
Haro’s traditional producers champion blended wines
A new generation of brave producers in Rioja (I)
Destemming grapes with Abel Mendoza in Rioja
Village wines in Rioja will be based on the location of the winery
Spanish wine growers: first steps towards excellence
A practical glance at Spain's wine regions
Rioja in the 21st century: styles and categories of wine
Haro’s Barrio de la Estación opens up to the world
What lies in store for traditional vignerons in Rioja?
Volume or quality in Rioja? 200 small wineries voice their discontent