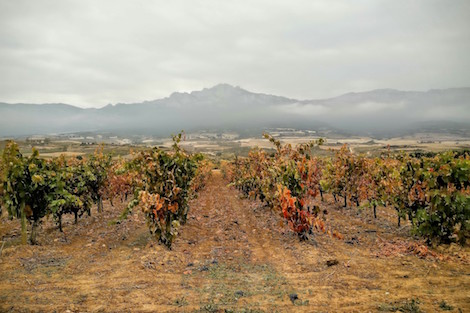 The Sierra Cantabria mountains, seen from the vineyards in Rioja Alavesa during the 2016 harvest. Photo: Yolanda Ortiz de Arri

Rioja’s Regulatory Body today approved two new categories of wine —village and region— that producers will be able to indicate on bottle labels from the 2017 vintage. As a result of this decision, plans to create a new appellation called Arabako Mahastiak / Viñedos de Álava will be put on hold. This new initiative was launched last summer by 40 producers in Rioja Alavesa who were unhappy with the lack of initiative within the DOCa Rioja to differentiate the origin of the vineyards.

For the Association of Rioja Alavesa Wineries (ABRA), who presented the breakaway appellation, the decision to approve new categories is a “historic agreement” that meets “demands that the markets want and understand”.

The agreement, voted unanimously by Rioja Regulatory Body except for the cooperatives in Navarra (UAGN) who abstained, will allow up to 15% of grapes from neighbouring Rioja areas provided that “the vineyards have long been established and are part of a long-standing business to avoid profiteering”, according to the DOCa Rioja. Thus, a producer based in Samaniego (Rioja Alavesa) will be able to include up to 15% of grapes from Abalos (a neighboring village in Rioja Alta) to make its village wine, but will not be able to use grapes from San Asensio further away.

The winery remains the starting point

Producers will not be allowed to make wines from different villages, as it occurs in Burgundy or Alsace; instead, their village wines will have to come from the same location where their winery is built.

For a considerable number of winegrowers like Arturo de Miguel, co-owner of Bodegas Artuke in Baños de Ebro, who is focused on making terroir wines, this new category is a missing opportunity to prioritize the vineyard over the location of the winery. "In the end, things remain the same. The new designation certifies the origin of the bottling rather than the origin of the grapes", he regrets. "Our vines in Ábalos and San Vicente de la Sonsierra represent 32% of our total surface under vine. In the old days, growers used to own their vines in their village. Nowadays, modern means of transport have changed all that. Most of us look for quality vineyards; how close they are to the winery is secondary".

Rafael Vivanco, who owns 300 hectares of vineyards across the entire DOCa Rioja, thinks that it could have been more ambitious but he is pragmatic and values the fact that so many people have managed to agree. "The right thing would have been to start in the vineyard rather than focusing on the winery and limit village wines to vineyards under ownership to have real investment and effort", thinks this producer based in Briones. "In the end 'one size fits all' has been the preferred result. There are so many conflicting interests in Rioja that I think it's good to see some progress, as small as it may be. I think this new designation will help to showcase the diversity of Rioja".

The Regulatory Body argues that Rioja "has always contemplated that wines from minor geographic units must be obtained, made and bottled in the same unit. It is a matter of traceability and also of identity, something that consumers will surely understand", insists its director general José Luis Lapuente. "It is for the market and consumers to say whether the identity concept of the bottling is not seen as relevant. We expect the market to respond constructively".

Area and village wines -passed in the midst of the summer season and on the eve of a bank holiday in Spain- join the new Viñedos Singulares designation approved last June. With these two measures, Rioja authorities understand that the demands of many producers -particularly from Rioja Alavesa and Rioja Alta- to acknowledge the identity and origin of the wines have been met. The cooperatives, who rejected the village wine designation in the meeting held a couple of months ago, seem to be satisfied.

Another novelty that will be soon visible on Rioja labels is the size of the village or area name. Up until now, it could only be two thirds of the size of the word 'Rioja’ but from the 2017 vintage this rule disappears —although a village name will never be able to be larger than the Denomination. Additionally, Rioja Baja —perceived to have a negative connotation— will soon be known as Rioja Oriental provided that it is legally viable.

For Inés Baigorri, president of ABRA, the agreement is a consequence of the “pressure of knowing that the new DOP Viñedos de Álava was going to be officially supported” and takes its share of credit for the new developments.

“These new designations widen the wealth of working models in the region and bring visibility to the origin of our grapes and to our villages. It is obviously a huge step ahead that we hope it is implemented; Fernando Salamero himself [president of the DOCa Rioja] has thanked us for our efforts”, says Baigorri. The 40 winegrowers in ABRA, who will now be able to label their wines as Rioja Alavesa, have agreed to put their new DOP demands on hold for two years to give time for the new designations to be implemented.

These new geographical indications will co-exist alongside the current system of Rioja wines being labelled according to their length of barrel ageing —Joven, Crianza, Reserva and Gran Reserva— which allow blending grapes from different vineyards across Rioja.

Does terroir matter in Spain's appellations?
A group of Rioja Alavesa producers apply for a new DO
Juancho Asenjo: “Rioja is known for its fine wines not for volume”
A Manifesto in favour of Spain’s unique vineyards
A MW research paper on wine classifications in Spain
Finca Allende in Rioja rethinks its winegrowing strategy
Classic bodegas in Rioja reflect upon tradition and innovation
“Galicia is the Spanish Burgundy and has tremendous potential”
The challenges ahead: “Rural areas, medium-range wines and the cultural sphere”
Can Spain save its ancient subterranean wine cellars?
A guide to Priorat’s new vineyard classification
Sandra Bravo: In search of the flavour of Sierra de Toloño in Rioja
Introducing Rioja’s first Viñedos Singulares
Finca la Emperatriz: when less is more
Rioja in the 21st century: styles and categories of wine
Sommelier Carlos Echapresto: “Rioja could be a victim of its own success”
Volume or quality in Rioja? 200 small wineries voice their discontent
“The word Rioja helps to sell, but adding value is up to the individual”