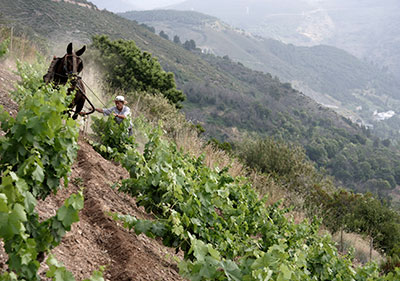 The arrival of Álvaro Palacios in Bierzo along with nephew Ricardo Pérez at the end of the nineties caused a stir in a region that was starting to focus on the subtle personality of Mencía, the local red variety.

The Palacios project was set apart from the others for various reasons: it actively searched for old vines located in steep slopes at high altitude in the vicinity of Corullón and applied vinification techniques that were less focused on extraction and more on highlighting terroir personality. Additionally, Ricardo is one of the first producers in Spain to farm his own vineyards following biodynamic principles.

With its monastic past, its location right in the heart of the Camino de Santiago (The Way of St James), and a considerable amount of old vines perched on steep slopes, the Bierzo area must have felt like a small Atlantic Priorat to Álvaro Palacios. It has all the ingredients to produce Burgundy-style wines.

Villa de Corullón (€36, around 17,000 bottles) is a village wine made from Mencía -and occasionally some white grapes- sourced from over 200 small plots. There are several single vineyard and Cru-style wines. Out of the five wines launched initially, two (San Martín and Fontelas) have been discontinued. They are all Mencías, although they may be blended with a small percentage of Alicante Bouschet or some white varieties that happen to be planted in the vineyards.

Premium wine La Faraona (€900, around 600 bottles) comes from a vineyard located at an altitude of over 900m. It reproduces L'Ermita model in Priorat but is less accesible given its tiny production. It shares similar traits with the rest of the wines in the range, but it is deep, elegant and distinctively expressive. Las Lamas (around €110, over 2,000 bottles) offers a text-book fruit expression of Mencía with outstanding juiciness, whereas Moncerbal (€110, around 2,000 bottles) shows a mineral earthy character.

The winery's big hit was the launch of Pétalos del Bierzo (€14, 350,000 bottles), their entry-level or "regional wine" as Álvaro Palacios likes to describe it. Even if some grapes are sourced from outstanding vineyards like Moncerbal or Las Lamas, most of them come from local purveyors.

“You don’t need to be a good taster to be a good sommelier”
Descendientes J. Palacios spearheads change in Bierzo
Microbes, flamenco and an open-minded look at Spanish wines
Eight stories to understand the 2018 harvest in Spain
What do critics really value in Spanish wine?
Horses and other animals that help wine producers
The lockdown shapes our most popular stories of 2020
What to expect from the new Bierzo categories