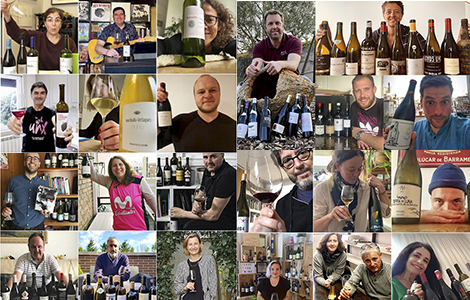 The lockdown stories of Spanish wine professionals was SWL’s most popular piece in 2020.

In case we were not yet aware of the tremendous impact of the pandemic in our lives this year, the summary of our most popular articles in 2020 has brought us back to this ubiquitous reality.

Traffic in Google Analytics registered two sharp drops on March 13th, the day the lockdown was announced in Spain, and June 20th, when it was lifted. In between, however, we enjoyed record numbers of visits. It’s fascinating to see how two of the year's most important dates have been accurately captured in a statistical chart.

In line with the difficulties faced by the hospitality industry as a result of the temporary closures and the business hours restrictions, clicks on our "Addresses" section, where we recommend wine-friendly bars and restaurants, have dropped significantly.

Our #WeStayAtHome series, the most popular story by far

Undoubtedly, the most popular piece this year was our #WeStayAtHome series featuring 58 wine professionals who told us how they endured the lockdown and which wines they opened during those weeks at home. The result was a bunch of touching little stories —some mourned the passing of a loved one, others lost their sense of smell due to Covid, a few had to reinvent themselves or saw it as a chance to study and enjoy the frantic activity of talks and online tastings on social media. One thing that was evident in all the interviews is that wine helps us to feel connected. And despite the unprecedented social distancing experience, it was comforting to find friendly faces, human warmth and lives with whom we could all identify.

The second most-read piece was our in-depth story about the coronavirus crisis in Spain’s wine industry which was updated throughout March and included the views of analysts, wine producers, retailers and restaurant owners who explained how they were dealing with the pandemic and its effects. The third most-read article also dealt with the dominant issue this year, but the focus was the surge in online wine sales, as a result of the on-trade restrictions and closures. With much more data available now, we know that such growth was not enough to offset the losses experienced by bars and restaurants.

The only non-Covid story on our most read list was written in January by Félix Cabello. Our grape expert, who explained the impact of vine diseases on Spain’s varietal map,  presciently predicted the severe mildew outbreaks that affected many Spanish winegrowing regions in the spring. Diseases have marked both people's and plants' lives in 2020.

Worthy of note was the popularity of our monthly online wine tastings agenda, particularly in March and April, as well as May. This reflects the exponential rise of online activities on social media during the lockdown, with Instagram playing the leading role.

In a pandemic-driven world, the producers featured in our "Wineries to watch" section proved less popular. The most popular stories among our readers included Julia Casado's determination to grow Monastrell in Murcia and, most recently, Peter Sisseck's new project in Jerez and the key role played by Forjas del Salnés to revive red wines in Rías Baixas.

Our wineries section, containing almost 350 producer reviews, steadfastly remains the most popular segment of the website, both in the Spanish and English versions, second only to the Home page and the search function. The most searched-for producers are a mix of young, groundbreaking winemakers and historic houses. Envínate, with no website of its own, ranked first, followed by Marqués de Riscal, Muga, Comando G (also without a website) and Descendientes de J. Palacios.