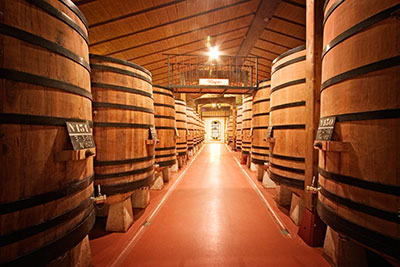 Muga stands proudly in the famous Haro Railway Station District, surrounded by some of the oldest wineries in Rioja. Despite being less than 100 years old, the strength of its brand and its market positioning, with a presence in over 70 countries, places it among the elite of the appellation. It has some 300 hectares under vine, catering for 70 to 85 % of its needs depending on the nature of each vintage, and produces around 1.5 million bottles of very high quality wines every year.

A family-owned winery, the energetic and large third generation has successfully taken over from brothers Manuel and Isacín. Manu, Juan and Eduardo, Manuel's sons, are in charge of sales and management, while their sister Ana, who lives in Madrid, is in charge of communication. Their cousins oversee viticulture and winemaking. Jorge is focused on reds while Isaac is adding great dynamism to the production of whites and rosés. They all share the same friendly manner and are very recognisable for their height. Being a 100% family business has allowed them to make long term decisions and make significant investments in old vineyards.

Several generations of the family have been established in the valley of the rivers Tirón and Oja. Their great-grandfather worked as a cellar master for La Rioja Alta, S.A. and grandfather Isaac met his future wife there, Aurora Caño. The couple founded their own winery in 1932 in the underground cellars in Haro's main street. Aurora was reportedly a great wine taster, and she was able to identify different plots of land and "nail" the villages. In 1970 the family moved to its current premises, although visitors are left with the impression that the cellar has been there just as long, if not longer, than any of its neighbours.

An extremely classic and legendary winemaking process contributes to this impression. The entire red wine making process, from fermentation through malolactic fermentation to ageing, is done in oak. Egg whites are still used for clarification.

Especially notorious is the quantity, variety and size diversity of vinification and aging vessels, including the 16,000-liter storage oak casks. This is partially explained by the fact that Muga is one of the few wineries in Rioja (and in Spain) to have its own cooperage. It makes around 2,000 barrels a year, most of which are made of French oak, as well as vats and casks. The winery employs the only cooper left in Spain, Jesús Azcárate, who has been with the company for over 40 years. Muga has a stock of around 10,000 barrels.

The style of the wines is closely tied to the climatic conditions of the Oja-Tirón river valley, to the far west of the appellation, and where most of Muga's vineyards and those of its suppliers are concentrated. For the cavas, whites and rosés, Muga also source grapes from the Alto Najerilla valley, a cool area in Rioja with a high presence of Viura and Garnacha plantations.

Muga makes cava in both white (€14) and rosé (€19) versions under the brand Conde de Haro. The house white is a barrel-fermented Viura with some Malvasia and Garnacha Blanca (€10). The traditional rosé, a blend of Garnacha with some Viura and Tempranillo, has always been among the palest wines of the DO (€9), and is now complemented by Flor de Muga, a more sophisticated and profound rosé made from high altitude Garnacha from the Najerilla Valley (€20).

Reds are Muga's flagship wines. Aged for 24 months in oak, the Crianza (€16-17) is sold well above the usual prices in this category in Spain, but it is exported as a Reserva. It is the only red wine that is released every vintage. One step above in terms of grape selection and meant to be aged, is Selección Especial (€27). It is sourced from vineyards cultivated on Tertiary clay-limestone terraces located at between 430 and 450 metres above sea level.

Torre Muga (€66), the house's first modern red wine launched in the 1991 vintage, come from vineyards at higher altitudes (500 to 550 metres) on the slopes of the Obarenes mountains and in the vicinity of Villalba de Rioja. The goal is to combine freshness and good ripening. The house's other modern red is called Aro (€175). A blend of Tempranillo with 20% Graciano from vines over 60 years old, it is particularly concentrated and sold in very limited quantities.

The house's classic is Prado Enea Gran Reserva (€50). It comes from the vineyards at the highest altitude (around 600 metres) situated on the boundaries of cultivation in the westernmost part of Rioja, an area with a considerable presence of clay in the soil. Incidentally, "muga" means "border" in Basque. Prado Enea is released when it is at least seven years old. Normally, it is assembled in a pyramidal fashion, starting with a limited blend in the spring after the malolactic fermentation, and then gradually adding other plots until the final blend is made.

The region's secondary red varieties (Garnacha, Mazuelo and Graciano) play an important role in Muga reds and usually represent around 30% of the blend. Check details and book activities here.

America’s west coast opens up to new Spanish wines
Our top cavas and sparkling wines for Christmas
31 wines to try in August
The long hard road to become a Master of Wine
Old and new Rioja around Haro’s railway station
Spanish rosés turn pale and aim for quality
Top places to enjoy Spanish wines in Frankfurt
Haro’s traditional producers champion blended wines
Five top Riojas to enjoy this Christmas –plus a few affordable alternatives
International experts choose their top Spanish wines
Classic bodegas in Rioja reflect upon tradition and innovation
Wine tourism with a twist
Most popular stories in 2019
Rioja in the 21st century: styles and categories of wine
Exploring Muga’s vineyards in Rioja
Haro’s Barrio de la Estación opens up to the world
Rioja and American oak: a slightly fading but still solid alliance
The lockdown shapes our most popular stories of 2020
Brighter outlook for Spanish wines but challenges remain
Txomin Rekondo: A lifetime among fine wines in San Sebastian