Marqués de Riscal Rioja | Spanish Wine Lover ﻿
This site uses cookies. By continuing to browse the site you are agreeing to our use of cookies.Cookies policy hidden 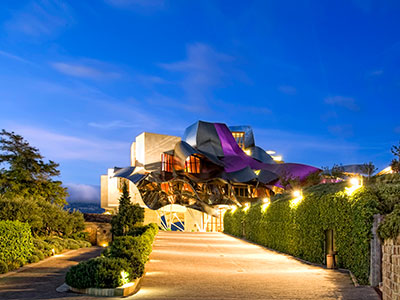 A century and a half after it was founded, Marqués de Riscal is known worldwide for the coloured curves of the hotel designed by Frank Gehry. Winelovers, however, prefer to dream of its historical cellar (the "Botellería Histórica" aka "The Cathedral") which stores bottles from every vintage since the first harvest in 1862.

Bodega de los Herederos del Marqués de Riscal, as it is officially named, is located in the village of Elciego, within the Rioja Alavesa sub-area. It owns 540 hectares of vineyards and controls another 900 to produce more than six million bottles a year. It is one of the easiest Spanish brands to find abroad - over 60% of its production is exported to more than 100 countries.

Camilo Hurtado de Amézaga, marquis of Riscal, was a man ahead of its time. He found inspiration to set up his winery in Bordeaux in 1858. Soon after that date, he brought the first French vitis vinifera to his vineyards. Cabernet Sauvignon was the variety that best adapted to the Rioja terroir so it played a key role in his wines, specially those known as “reserva Médoc”, which can still be sampled in rare historical tastings. This variety is only allowed in Rioja for experimental purposes, but Riscal still blends it in its top wine, Barón de Chirel.

Riscal embarked on the 21st century decidedly set on maintaining and reinforcing its position as one of the most important and well-known wineries in Rioja. The creation of the City of Wine has undoubtedly been the most audacious, intense and effective marketing campaign ever displayed by a Spanish winery. The City of Wine (the name is patented) includes the Marqués de Riscal Hotel, designed by Frank Gehry and operated by the Marriott chain; two restaurants overseen by Riojan chef Francis Paniego, who received his first of several Michelin stars in 2004; a wine therapy spa managed by Caudalie, the leading firm in the field and the ancestral winery. Nowadays, Riscal is one of the most visited wineries in the world.

Traditionally, its range had never included a wine below the Reserva category. Its main wine, Marqués de Riscal Reserva (around €15 in Spain), is, vintage after vintage, the reference of what a Rioja reserva must be. Since the purchase of Marqués de Arienzo in 2010, the brand Arienzo has added a Crianza to its portfolio.

The winery's top wine is Barón de Chirel Reserva (around €68), a pioneer in the modernisation of Rioja since it was first launched in the 1986 vintage. However, Gran Reserva wines have gained ground in the last years thanks to the market's renewed interest in this category. Marqués de Riscal 150 Anniversary Gran Reserva 2001 was launched to commemorate the winery's sesquicentennial
(around €48).

Finca Torrea (around €21) was launched in 2009 and represents a modern rioja concept with no Crianza label and a fruit-forward style. It is made from the old Tempranillo and Graciano vines planted around the Elciego winery. Finca Torrea and Barón de Chirel are both aged in French oak barrels; American oak is still preferred for the traditional range of Reservas and Gran Reservas.

The latest addition, launched at the end of 2019, is the Reserva XR (around €21 in Spain). It takes its name from the letters XR, used by the French winemakers who were in charge of the wines until the 1950s to mark their best barrels. This brand, primarily destined to the on-trade, is a blend of Tempranillo with 5% Graciano which has been aged for 24 months in barrels. There is another wine in the pipeline, Las Tapias, that joins the new Viñedo Singular category in Rioja. Grapes are sourced from one of Riscal’s most legendary vineyards in Elciego.

Riscal pioneered the production of modern white wines in Rueda through its company Vinos de los Herederos del Marqués de Riscal and owns a third winery in Zamora, near the border with Portugal, where it produces Riscal 1860 Roble and an old vine rosé in the VT Castilla y León category.

Riscal also produces a new Txakoli (€12) with the Hondarrabi Zuri variety. Vibrant and mineral, grapes are sourced from Oñati, an inland, continental area in the province of Bizkaia.

Find out where to find Riscal’s wines in Spain and the rest of the world.

An online site to purchase old Spanish wines
In search of old Riojas (and III)
In search of old Riojas (II)
Microbes, flamenco and an open-minded look at Spanish wines
Summer readings over a glass of wine
Introducing Rioja’s first Viñedos Singulares
Most popular stories in 2019
Rioja in the 21st century: styles and categories of wine
Txakoli: a guide to producers and wines
The lockdown shapes our most popular stories of 2020