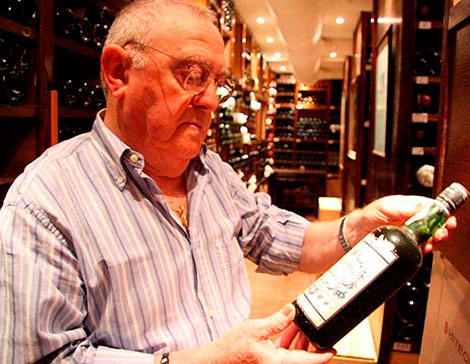 Txomin Rekondo holds a bottle from his vast cellar specialised in old-vintage Rioja wines. Photo courtesy of the restaurant.

It might be that some of Haro's first wineries were founded by Basque families or it might be the proximity to Rioja, but the fact is that collecting old Riojas is a well-established tradition in the Basque Country. All of the 19 Michelin-starred restaurants -plus many other places where good food is served- offer bottles of these great wines. Here are some of Spanish Wine Lover's favourite addresses.

With three long-standing Michelin stars in his pocket, Pedro Subijana has little to prove. Along with Arzak and Martín Berasategui, he reigns king in the San Sebastián gastrosphere but Subijana only boasts about his genius in the dishes he serves at his restaurant on Mount Igeldo, overlooking the Cantábrico sea.

Sommelier Carlos Muro ensures that those creations are paired with good wines. Although only a small part of the 650 references stored in Akelarre's cellars are old Rioja vintages, they have featured in the wine list for 35 years. Despite the recent hype over this type of wines, demand has not increased, says Carlos, who blames the economic downturn. "Old vintages command high prices so in fact we have seen a downward trend in their consumption". The oldest vintage they keep dates from 1952 but he is proud of the Viña Real Gran Reserva vertical from 1981 to 1994 and the López de Heredia collection.
Old wines are favoured by foreign customers, mainly middle-aged Asians and Brits who appreciate classic vintages, although he remembers a client who ordered an old bottle "just because he wanted to see how a bottle was sabered".

Foodies have surely heard of Kaia's grilled fish, one of the best along Spain's northern coast. Located by the port of this Gipuzkoa village, Kaia is not a cheap option to eat but its cellars store 1,000 selections and 40,000 wines at very reasonable prices.

As well as the extensive wine list, there is a 4,000-strong private collection which is not for sale. These are the oldest vintages, some from the 1920s onwards, which move onto this special category when the number of bottles on the "official" list starts to dwindle. With so many old glories in its cellar, the restaurant is a favourite hangout for many wine producers, who drive to Getaria to sit at Kaia's tables and drink part of Rioja's history.

Manager Igor Arregui's philosophy is simple; He wants to enjoy these beauties with family, friends and "anyone who appreciates them". He has reorganised the huge cellar inherited from his father, whose purchasing policy was always rather prodigal and focused on great vintages. Igor still buys top wines for the private collection, specially from Rioja, but has widened the spectrum to include Toro, Bierzo and Priorat. "I don't know how they will age, but I think that if Eguren, Artadi, Mauro etc are good at a young age, they will also be good at an old age", he says.

Nowadays the cellar is computerised and stock-controlled and both the wine list and the private collection are published on the restaurant's website. Their aim is to keep prices in check: "Back when they were bought these wines were not expensive; we want people to drink them rather than store bottles here", says Igor. There is no lack of demand. Locals generally prefer newly released Crianza styles but foreign visitors prefer older selections. Russians, Americans, Asians come in search of past vintages from traditional wineries which would cost them triple in their home countries. Even Robert Parker has sat at Kaia's tables overlooking the sea. His choice: Viña Real 1962.

José Luis Martínez has been in the restaurant business since 1957 and despite his 80 years of age, the thought of retiring has not yet crossed his mind. His daughter Susana takes care of the day to day management now, but he is still around, never too far from the stove and the wine cellar.

He has never counted how many bottles rest in his cellar, but he knows they occupy 12 pages of the menu. Old vintages gradually give way to younger ones and they are now relegated to the end of the list. Tastes change, he says. People are a bit scared of ordering old wines, but José Luis encourages his customers to try them even though he knows he might lose money. "I bear the cost if a customer doesn't like an old wine of his choice. The wine has not gone bad, it's just that it has evolved but unfortunately such style is not fashionable anymore". Occasionally, a customer comes to the restaurant and buys four boxes of wine but that's rare nowadays. That's why José Luis doesn't buy old vintages any more and is gradually clearing his stock, which he sells by the case. Prices are very interesting: Cvne Imperial Gran Reserva 1975 is for sale at €35.

Twenty years ago, when Cubita moved to its current location, wine labels suffered some scratches. Although he takes great care of the bottles and keeps them in a cool underground cellar with good humidity, wear and tear and cellar life has had an effect on them. Regulars are mostly local, even those in search of old wines. "They are usually wine lovers or people on business meals who want to look good in front of their clients", says José Luis, although he hastens to add that the economic downturn has damaged this type of clientele.

Cubita doesn't stock the great verticals of yesteryear but still keeps some oldies with a history behind them. Excelso 1950 or 1959 from Paternina, Siglo Saco 1939 and great vintages such as Viña Ardanza 1964, the first of this brand bottled as "Reserva Especial" and without the DOCa Rioja aging indicator, as it was common in those days.

He remembers Frank Gehry's visit when the Canadian architect was building Marqués de Riscal's 5-star hotel in Elciego. "I've got quite a few vintages of their wines so they tried several bottles such as the 1950 and 1964 Reservas and they were delighted".

Txomin Rekondo cares much more for quality than quantity. That is why he has never thought about counting how many bottles lay on the cellar of his restaurant in the Basque city of San Sebastián. He reckons there might be about 125,000 to 127,000 representing 4,000 different selections and multiple vintages starting from 1880 upwards.

Rioja occupies a preferential place here. López de Heredia, Cvne or Paternina verticals line the shelves of Rekondo, but Txomin is proud of his Marqués de Riscal collection, with 80 or 90 different vintages which he has been putting away for the past 40 years. It would be impossible to start a cellar like his nowadays, he says. "There are over 17,000 different wines on the market right now. When I started, I bought a larger number of bottles because the offer was much shorter. These days I buy good vintages from interesting brands but there are new wines popping up everyday". He praises the aging capacity of Rioja wines made 40 to 60 years ago, even over Burgundy. "We recently opened a bottle of Marqués de Riscal 1942 for a French winemaker and it was in perfect condition. The old ones hardly ever fail", adds Txomin.

He doubts whether wines made from 1990 onwards will display the same aging capacity and thinks such uncertainty is shared by wine producers. "Perhaps climate change is to blame; or it might be the way the land is cultivated but one thing is clear: too many vines have been planted in the wrong places. We should go back to earlier days and focus on making less wine and improve selection".

His clients are interested in wine and it is not unusual to see them pouring over the 242-page wine list. Since Wine Spectator named Rekondo one of the best wine destinations for diners, the number of foreign visitors asking for old wines has increased considerably and they are usually surprised by the good quality-price relationship. "I have lots of selections from the 1950s and 1960s for under €30; many clients think that's the price for a glass, not the bottle", he says.

This surge in the demand for old vintages leaves Txomin with mixed feelings: "I've had this cellar for 40 years and I suffer every time I sell one of them. There seems to be a new fad for old classics and word of mouth has attracted many customers here to drink them. I am very happy about this surge, but I'm also sad to see these wines go for good". One thing is clear for Txomin, though. The last bottle of a great wine is removed from the wine list and remains unsold at Rekondo's cellar.

He often receives requests from wineries who want to buy back their old vintages and from individuals in search of specific bottles or brands to take home, but Txomin declines. "We want people to drink and enjoy these wines here, at the restaurant". He's also reluctant to pair wines with the food he serves at Rekondo. "We would need to prepare specific dishes to match the wines but I prefer to advise clients based on their preferences. Isn't that what we are here for?".

A taste of the Basque capital
San Sebastian: top spots for wine and pintxos
Haro’s traditional producers champion blended wines
An online site to purchase old Spanish wines
In search of old Riojas (I)
In search of old Riojas (and III)
A walk through 21st century Cvne with Víctor Urrutia
Getting a taste for old Paternina vintages at Conde de los Andes in Rioja
The rebirth of Rioja’s ancient cellars
Haro’s Barrio de la Estación opens up to the world
#CarpeDiemWine: is it time to uncork special bottles?