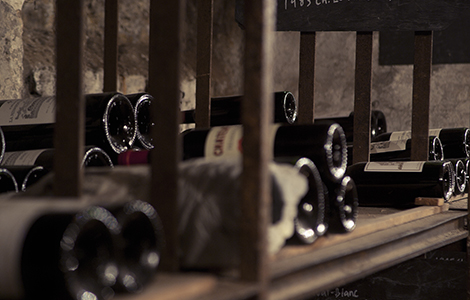 Spaniards in general do not care much for old things. This disdain, which also applies to the world of wine, has been a godsend for foreign buyers and collectors mostly from the US and the UK, where old wines are greatly valued. They took advantage of the opportunity to acquire great vintages from classics such as López de Heredia and Marqués de Riscal to the point that most of the wineries with a sizeable bottle collection rarely sell old vintages these days.

"Where else in the world could produce such a consistently high standard in similar vintages? Possibly burgundy? I'm not at all sure that bordeaux would have consistently hit such high spots ", wrote Jancis Robinson MW in her website after a Rioja tasting that went back to 1939 to 1982. Pricewise, there is no competition. Berry Bros, Britain's oldest wine shop, sells a Château Palmer Margaux 1982 for £340 against £195 for the same vintage of La Rioja Alta Gran Reserva.

"The lack of interest for old wines among Spaniards is a question of wine culture and proximity", says María Álvarez, who locates, checks and values private collections of old Riojas through her company Fine Wines Connection. "It is something accessible so I guess that's why people don't pay too much attention to this kind of wines. If you live in Spain, it is quite easy to travel to Haro and purchase a box of López de Heredia wines; if you require that same box to be shipped to the US, the effort and cost is magnified".

Her opinion is shared by Fernando Ortiz, at Bodega Histórica Don Carlos in Aranda de Duero (Burgos). He owns some 5,000 bottles dating back to 1890 and sells some of them through  Vinocolección. "I studied oenology in Rioja. Something that always surprised me was the disdain old people showed towards old wines. I had friends in New York who love tasting old wines whereas in Spain people threw them away because they thought the wines were off".

Most of the collections María deals with belong to wine lovers whose descendants want to sell. "Collecting wine is usually a hobby, not an investment, and conservation is not a top priority", she laments.

María rejects brands which have disappeared because they lack guarantees and are hard to sell. She tastes samples of some collections to check their quality. "Excellent vintages such as 1928, 1945 or 1970 can be found along the northern Spanish coast, where the highest number of collectors is found. Sometimes though, bottles have been stored in empty flats or commercial premises without proper insulation, explains María.

In warm areas such as the Mediterranean, inadecuate storage can be devastating. If such wines enter the marketplace, their value is affected. "Brits and Americans appreciate this style of wines, but in the UK we are seeing old vintages on sale at very low prices bringing uncertainties over their origin and devaluing the product", she warns.

Demand is now high for the 1964 vintage. Not only is a legendary year in Rioja but all those baby boomers who are turning 50 this year are pushing prices up to $300 - $500. Fans should not despair, though: there are some old wines for $100. "Great vintages such as 1970 or 1982 sell for that price. The most desirable brands are Cvne, López de Heredia, Marqués de Murrieta, La Rioja Alta and Vega Sicilia outside Rioja", María says. Fernando values these names but he would like others such as Viña Lanciano (Bodegas Lan) to be recognised for their 1970s bottlings. His collecting experience has taught him something valuable: "Things have changed since the 1970s. The use of new techniques has made wines more fragile. Climate change is also playing its part, producing very ripe, high alcohol wines".

María also doubts about the aging capacity of modern wines, specially single varietals. "Good grapes, acidity and long aging time in barrels are essential to stretch a wine's life. Modern examples might be made with excellent raw materials but they are highly extracted, show modest acidity and are aged for short periods in new oak so their chances to reach old age are greatly reduced. This does not imply that all classic-style wines will evolve gracefully. Producers must apply the formula to obtain long living wines", she says.

Haro’s traditional producers champion blended wines
An online site to purchase old Spanish wines
In search of old Riojas (and III)
A walk through 21st century Cvne with Víctor Urrutia
In search of old Riojas (II)
Getting a taste for old Paternina vintages at Conde de los Andes in Rioja
The rebirth of Rioja’s ancient cellars
Haro’s Barrio de la Estación opens up to the world
#CarpeDiemWine: is it time to uncork special bottles?