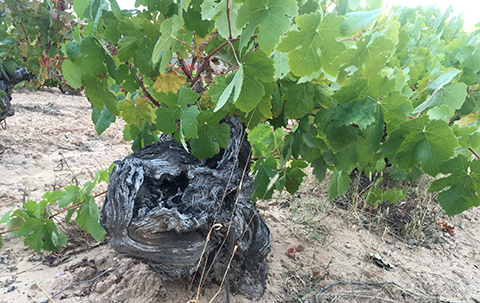 Our most-read piece in 2018 featured old vines like these. Photo credits: Amaya Cervera.

The most popular item on our site in 2018 was The real value of old vines, a piece about the role of traditional and historical vineyards as guardians of biodiversity and as a source of solutions to deal with the countless challenges ahead for wine growers. It was published in March, a few days after the third edition of a technical seminar called Designing a long-lived vineyard. It was hosted by agronomist and consultant Julián Palacios in Laguardia (Rioja Alavesa).

Our interview with Almudena Alberca, the first Spanish woman to become Master of Wine was our second most-read piece in 2018. Her appointment coincided with a year in which demands for gender equality increase across the world.

Our third most popular item focused on Chilean soil expert Pedro Parra, the consultant to whom terroir-driven producers go to for his ability to understand whether or not certain terroirs can produce a particular style of wine. We reported about a workshop held at different vineyards owned by Comando G in Gredos, a mountainous area one hour north of Madrid.

A trio of wineries to watch

Producer profiles are particularly sought-after on our site, so we were not surprised to discover that the other most popular pieces in 2018 belonged to the "Wineries to watch" section. It is interesting to note that the three most-read pieces cover different regions and winemaking styles. Rafael Palacios, the well-known white specialist based in Valdeorras, heads the list.

Palacios’ strong background is miles away from our second most-popular profile in 2018. Muchada-Léclapart is an unusual partnership between a young Spanish architect turned wine grower and Champagne legend David Léclapart to produce unfortified wines in Sherry country.

Third comes Dominio del Pidio in Ribera del Duero, the new project of the Aragón brothers outside Cillar de Silos, the family estate. Favouring a return to traditional winemaking, they work with grapes from old vines in a less extractive style. Their efforts to recover part of the old bodega district of Quintana del Pidio to produce and age their new wines is noteworthy.

Most popular stories in English

As a bilingual website, our stories tend to behave differently in the Spanish and English versions. The most successful in English tend to focus on a particular style of wines or trends.

Our English readers avidly read our selection of Ten Spanish wines to try in 2018 that focused primarily on obscure grapes and regions; trends for the forthcoming year (The Spanish wine styles that will triumph in 2018) -which incidentally remain valid for 2019- and the piece on Vega Sicilia’s latest releases of Único with a special emphasis on the 2016 vintage (Único 2006 recoups the essence of Vega Sicilia).

Curious to know who are the most searched-for producers in our Wineries section? With almost 280 wineries reviewed so far, the most popular entries are the young producers who are setting trends and are relatively well-known internationally.

Envínate, the partnership of four winemakers producing fresh or Atlantic-style wines in the Canary Islands, Ribeira Sacra (Galicia), Extremadura and Albacete (southeastern Spain), top the list. They are followed by Abel Mendoza, a cult producer in San Vicente de la Sonsierra (Rioja Alta) who has greatly influenced the new generation of young producers in Rioja. Third comes Dani Landi and Fernando García’s Comando G. This is Gredos’s most internationally acclaimed producer and the driving force behind the area’s current status as a source of fine wine in Spain. Finally, we have Olivier Rivière, a Frenchman who settled in Rioja after training with Telmo Rodríguez and a prominent member of Rioja’n’Roll, the exciting group of young producers in the area.

Rivière and Comando G appeared in our list last year. Such high number of visits for all four producers is explained by the fact that none of them have a website of their own with the exception of Rivière, who is revamping his site.

“Sweet wines” is apparently a popular search given the high number of clicks on the 2015 Christmas piece The essential guide to Spain’s sweet wines, a selection that showcased the great diversity of sweet wines produced in Spain.
Another popular term among wine lovers seems to be “old wines” (in this case they searched “vinos viejos” in Spanish) judging by the number of clicks on our review of Vino Vintage Santander, the first online site that sells old Spanish vintages.

Other articles published prior to 2018 that were among the most-read pieces this year included the 2017 vintage report (in English) and our selection (also in English) of wineries in Spain which offer their premises for weddings. Written by Yolanda Ortiz de Arri in 2015, it appeals to many English-speaking wine lovers looking to celebrate their marriage at a winery (wine tourism professionals, take notice!). Another sough-after piece written by Yolanda Ortiz de Arri was The best places to drink wine in Logroño featuring a comprehensive selection of wine bars and restaurants in La Rioja’s main city. It was published in February 2016.