Bodegas Palacios Remondo Winery Rioja | Spanish Wine Lover ﻿
This site uses cookies. By continuing to browse the site you are agreeing to our use of cookies.Cookies policy hidden 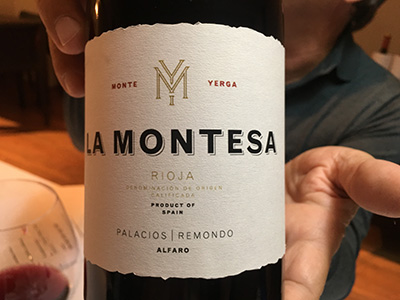 Founded in 1945, it has been the seed of a wine producing dynasty which has expanded beyond the Rioja confines. Álvaro is based in Priorat and in Bierzo with nephew Ricardo Pérez whereas Rafael Palacios is making white wines in Valdeorras.

Palacios Remondo has always been among the leading producers in the often snubbed Rioja Baja, traditionally associated with mass-produced wines rather than quality brands. It is therefore understandable that Álvaro Palacios tried to popularise the name Rioja Oriental, perceived as less derogatory than Rioja Baja, which has finally been accepted in the appellation.

Since Palacios took over the family winery, his vision for this part of Rioja can be summed in two words: Garnacha and elevation. The jewel of the winery is the fabulous La Montesa vineyard, set on the hillsides of Monte Yerga. Planted on this location and at the right orientation, Garnacha -the region’s natural variety- can produce wines that stand out for their freshness, aromatic nose and balsamic power. Álvaro Palacios, a Garnacha expert thanks to his work in Priorat, has put the focus on this variety at Palacios Remondo and is the dominant grape in his reds La Montesa (€12, around 650,000 bottles) and Propiedad (€24, around 30,000 bottles) which blend very small proportions of varieties like Garnacha Gris, Tinto Velasco, Graciano or Bobal.

As he successfully did in Priorat and Bierzo, Palacios has released a super premium single-vineyard red wine in Rioja. Quiñón de Valmira (€420, a little over 3,000 bottles) comes from a vineyard with bush vines planted in Mount Yerga in 1985 with calcium carbonate layers emerging at 20 cm below the surface. This is 100% Garnacha (with very small percentages of minor grapes) aged in oak foudres and casks. The style is aerial and delicate with floral and citrus notes followed by a mineral, sapid palate.

The winery also makes Plácet de Valtomelloso (€18, 18,000 bottles), a white Viura which was initially made by Rafael Palacios during his years as winemaker in the family estate. The changes introduced by Álvaro Palacios include fermentation and ageing in 2,000-litre foudres, Burgundy-shaped bottles since the 2016 vintage and the organic seal starting from 2017.

10 great-value reds to celebrate Grenache day
US wholesalers warm up to Spanish wines
Grenache soils in Spain
Five top Riojas to enjoy this Christmas –plus a few affordable alternatives
Garnacha, can a grape be sexy?
Rioja in the 21st century: styles and categories of wine