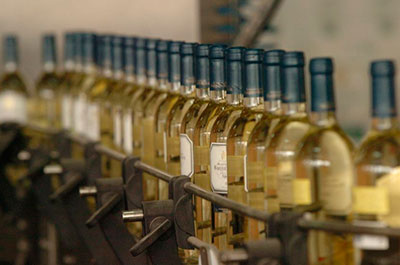 Marqués de Riscal settled in Rueda in 1972 under the conviction that the region had all the necessary elements to make quality white wines on a relatively high scale in Spain. Using cold temperature technology and stainless steel tanks, it introduced the fresh, fruity style that reigns in the white wines made in this DO. Its pioneering spirit was also applied in the vinification of the first Verdejo single varietal, new plantings of Sauvignon Blanc in the region and the first modern barrel-aged Verdejo.

Marqués de Riscal owns 230 hectares and controls another 300 to 350 hectares to produce around four million bottles of white wine plus 1.5 million bottles of red wine sold as VT Castilla y León. An extra 100 hectares of land have been recently acquired and will be converted into new plantings. All vineyards are organically farmed.

The founder's descendants still run the winery. Luis Hurtado de Amézaga, whose father Francisco is the technical director of the winery in Rioja, oversees production in Rueda. One of the most noteworthy developments is the selection of a native yeast with optimum cold fermenting capacities, in force since the 2011 vintage. The premium whites, Finca Montico, Marqués de Riscal Limousin and the new Barón de Chirel are fermented with natural yeasts.

The most popular and large production label is Marqués de Riscal Verdejo (around €8 in Spain), which clearly reflects the character of the local Verdejo variety and demonstrates the area's capacity to produce white wines with an excellent QPR. On a similar price bracket there is a single varietal Sauvignon Blanc which particularly shines on cold vintages.

Finca Montico (around €12) is fruity, lively and persistent. Launched in the 2000s, it is seen as the Rueda equivalent of the Rioja red Finca Torrea: a single vineyard wine which comes from 20-year-old vines located on low-yielding (5,000 kg per hectare) gravelly soils in the village of La Seca. Marqués de Riscal Limousin (€15) has undergone a considerable evolution in the latest years to become more delicate and harmonious. This has been achieved with shorter aging times and the introduction of larger oak vats (600 litres).

This wine has also benefited from the inclusion in the blend of 30% of grapes sourced from very old vineyards in Segovia, in the south-eastern end of the appellation. With distinctive sandy soils, this phylloxera-free area has the largest concentration of old bush vines in Rueda.

According to Luis Hurtado de Amézaga, Verdejo from this area offers great volume on the palate and more acidity. That’s why the winery decided to use some extremely old vines to launch a high-end Barón de Chirel white (40 €) starting with the 2014 vintage. This is a powerful, enveloping, really impressive wine with notable cellaring potencial. Marqués de Riscal decided to launch it without the DO seal. “We wanted to express our dissatisfaction with many of the things going on in the appellation”, according to Luis. The fall-out with the Regulatory Board dates back to 2014 when Riscal issued a complaint to the Castilla y León authorities for the alleged failure to comply with quality controls for some wines.

In recent years, Riscal has strengthened its presence in Segovia. Particularly noteworthy is the purchase and planting of a property with over 20 hectares in one of the few areas with schist soils of this province.

Find out where to find Riscal’s wines in Spain and the rest of the world.

Riscal has its eye on Verdejo old vines in Segovia