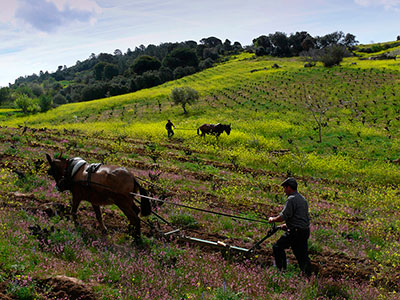 Located in San Martín de Valdeiglesias, the Bernabeleva estate is owned by the Villamil family since 1923, when Dr Vicente Álvarez-Villamil purchased the property. Bernabeleva means “bear path”, hence the unconventional logo which represents “the goddess of the hunt, to whom, in ancient times, sacred forests were dedicated, and a bear in a rite extoling the virtues of wine”.

The winery, founded in the mid 2000s, owns 35 organic or biodynamic hectares under vine. Horses work the land and organic matter levels are kept with the aid of their own cattle manure. The only treatments used are copper and sulphur, and only when necessary.

The most common variety in the estate is Garnacha, grown in granite soils at 600-830 metres above sea level, followed by whites Albillo, Muscat Blanc à Petits Grains and red Morenillo. Bernaveleva follows the new vinification style in this area – whole bunch fermentations in wooden vats and aging in large-format barrels.

Navaherreros (€13, 20,000 bottles) is their entry-level red and a perfect introduction to the minerality that is usually associated with the area's granitic soils and the saline notes from the vineyards in San Martín de Valdeiglesias. Three single vineyards reds are also produced: Arroyo de Tórtolas (€25), from a north-facing slope with shallow soils; Carril del Rey (€24), the latest vineyard to ripen despite its south-facing orientation; and Garnacha de Viña Bonita (€32), a mineral, saline wine with great personality born at an altitude of 700m on compact granite soils.

Bernabeleva welcomes visitors, although prior booking is neccesary. They are also open to organise all kinds of events.