1 and 2. An LCBO store in Ontario. Photo: LCBO Map in text by Ryan Hall

Canada is a strange beast in the wine world. It’s a massive, yet sparsely populated country. Reasonably wealthy, reasonably well-educated, and the next-door neighbour to the north of the United States. With a population of approximately 38m people (just slightly less than the population of the state of California), most of Canada’s population is strung out along a narrow band close to the border it shares with the US. Canada –at least most of it– is subject to various provincial liquor boards also known as monopolies, that control the importation, distribution, and sale of beverage alcohol.

The liquor boards arose in the wake of Canada’s own experiment with prohibition. It was never enacted at the federal level, and was generally created to regulate access to alcohol, but at the same time collect valuable taxes provincially, and in some ways, to ensure that the quality of products reaching consumers was safe. More recently, their roles could be viewed as that of tax collectors and grocers, selecting via their buyers what they feel their customers are looking for, and what sort of prices they want to pay.

Canada was long thought too cold for vinifera grape production, but in several regions –notably in the Okanagan Valley, and in the Niagara Peninsula, wine production thrives. But Canada’s wine making history is fairly short, and quantities are fairly small compared to other countries, meaning the country has long had a love of internationally sourced wine rather than favoring a home team or domestic production. Canadians are generally well-educated about international wines and have an enthusiastic love for traditional wine regions, but also an openness towards newer regions and consumer-driven or modern styles.

Countries with long and storied winemaking reputations like Spain are appreciated for their perceptions of quality for value, but also well-established brands pushing boundaries with new blends, more accessible flavours, and interesting and attractive labeling. In 2019, the total value of wine imports into the country were approximately 2.6bn Canadian dollars with Spanish wines accounting for around 163m of that.

Alberta, just over the Rocky Mountains from British Columbia, is a province of about 4.3m people centered around the two major cities of Edmonton and Calgary. Alberta is unique in Canada in that it has a provincial liquor monopoly that regulates wine imports and distribution, but that monopoly has no control over what is sold in stores as stores in the province are not owned or managed by the provincial board, and each retail establishment is free to carry any registered product they feel they can sell. Alberta imports around 6.7% of Canada’s Spanish wine, and around 14% of Canada’s imported wine. 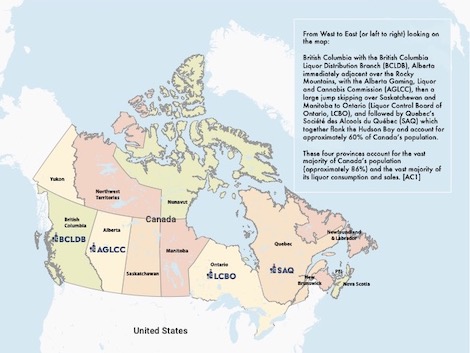 Ontario is Canada’s most populous province with around 14.5m inhabitants, and together with Quebec, contain over 60% of the Canadian population. By itself, Ontario accounts for 25.8% of Spanish wine imports as non-European imported wines have a greater reach in this market. Canada’s largest city, Toronto, with nearly 3m people is also the economic center of the country. Close by, the Niagara Peninsula is also the largest wine producing region of Canada. In Ontario, Spanish wine represents approximately 3.7% of total LCBO sales, up a respectable 12% from the year before, with its more upscale Vintages selections increasing by 12.6% indicating the price per bottle of Spanish wine is trending upwards as well.

In Quebec with a population of 8.4m, the SAQ reports that by litre, Spain is the third highest export country by origin. France dominates, in part due to the connection between French speaking Quebec and France, representing over a third of all wine, followed by Italy with 22.8%, and then Spain with 9.6%. This figure has seen small growth in recent years rising from 8.8% in 2019 –at the expense of Italian wines. Canadian wine, for context, represents just 3.1% of sales in Quebec. Given Quebec’s large population and its connections to Europe, they purchase just over half of Spanish wine imports to Canada. As a percentage of total wine imports to Canada, Quebec’s share is around 38%.

Little awareness beyond Rioja and Cava

Some of the export/import data coming from Canada should be taken with a grain of salt as the market does import a significant quantity of bulk wine which often appears in value-driven wines that used to be labelled as “Cellared in Canada” now generally “International-Canadian Blends”. These wines contain up to 75% international wine, but significantly skew both the price and volume of wine imports.

Awareness of Spanish wines is both helped and hindered by the country’s reputation for value offerings. Many consumers are familiar with the wines of Catalonia or of Castilla La Mancha, though they might not be aware of specific appellations or grapes within those bottles. Rioja wine is widely recognized within the Canadian market, while Cava is slowly taking root with consumers, though it is several years behind Italy’s highly popular Prosecco which enjoys excellent perceived value in the market. Having a fairly small Spanish speaking population, Canadians in many regards have little knowledge of the specifics of Spanish wine appellations, grapes, and in some cases, pronunciations of Spanish wine terminology.

Further complicating the issues for Spanish wine, Canadian consumers are separated by vast distances, and in many ways, the population has very different priorities and knowledge of wine. International producers looking to work in the Canadian market do not have an easy or even simple solution. Of the four largest provinces, three have alcohol distribution and sales controlled by separate provincial liquor boards each with a slightly different perspective of what their view of the wine priorities of their population are. British Columbia tends to favor domestic wine in some regards, while Quebec skews towards European offerings. Alberta remains a competitive market, but with no provincial board seeking tenders for supply.

Perceptions on wine are changing in Canada, as both the domestically produced wines increase in quality and with international wine. American wine is experiencing a decline in the Canadian market, Australian wine is witnessing a changing landscape in the market as well. Italy, France, and yes, Spain are continuing to grow their market share, but ample opportunity exists to increase education and awareness for their wines to not only retain consumers, but also attract new, and younger enthusiasts.

The recent COVID-19 pandemic upset established trends and projections for consumers, but also importers, retailers, and restaurateurs and the resulting supply chain issues globally didn’t help. It will remain fairly difficult for some time to identify what the next few years will bring for Canadians when it comes to the origins of the wines they drink. In addition, with restaurants suffering closures or reduced seating options or capacity, the habits of wine consumers have changed to reflect more at-home rather than on-premise consumption. A greater portion of wine sales are happening at liquor stores (either government run, or private), and accordingly, the price per bottle most consumers are comfortable with in a retail setting is different than in a restaurant or on-premise purchase.

Many countries are reducing their forecasts for exports, but others are jumping in with enthusiasm, seeing opportunities for value-driven offerings, or the continued importance of “authenticity” or story-driven consumption. As such, Spain and its wines are well placed to increase their place in the hands of the Canadian wine consumer.

US importers seek out genuine Spanish producers
What makes Spanish wines different?
Travel shock. Jonas Tofterup on the effects of travel on wine
Everyone can be a Spanish wine lover
A practical glance at Spain's wine regions