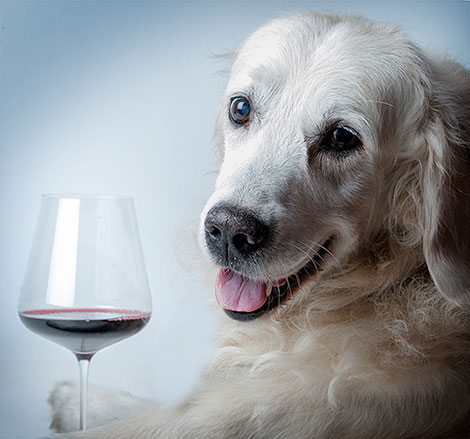 Please allow me to pay a tribute to my Golden Retriever who passed away this summer. Had he been a person, I’m sure he would have loved fine riojas and Garnacha wines. Photo © Pepe Franco.

There are many good reasons to try Spanish wines. Diversity is number one - I’d bet that every wine lover could be captivated  by a style of wine, a grape variety or a region in Spain. Please, do not misunderstand me. I don’t mean that Spain is perfect when it comes to wine. In fact, Spanish wines have their own weaknesses. An excessive use of oak, high alcohol and overextraction are likely to come to most wine lovers' minds. Perhaps also some disappointing experiences when you first tried Cava, Rioja or Albariño?

Quality producers all over Spain complain about the difficulties to persuade foreign buyers to appreciate and pay more for their labels when they can easily find much cheaper -although unexciting- examples within the same category. Spain is one of the three largest wine producers in the world together with France and Italy, and that means you should expect to find every possible level of quality in the market: from plonk to superlative aged reds and increasingly worthy whites.

Remove all the dull stuff and you still have a whole country to drink. A new generation of winegrowers and winemakers has revealed the exciting potential of many obscure regions and grapes. The days when Tempranillo was the sole player seem to be over now - the trend of highly extracted and new barrel-aged reds is increasingly being restricted to grapes and regions that really benefit from such methods. In contrast, many subtle and modest native grapes are thriving thanks to a more sensible approach. Delicacy, thus, is a word increasingly used in Spain.

Think of Spain as a multicultural, multilingual, multifaceted country and bring that same idea to wine. There’s a lot more to be said about diversity - I can think of at least five other good reasons why you should choose Spain next time you buy or order a bottle of wine.

Spain claims to have nearly one million hectares of vineyards spread across more than 65 appellations (Denominación de Origen or DO) and roughly 25 IGPs or Vinos de la Tierra designations. The IGPs are similar to French vins de pays and sometimes act as a catch-all category for high quality wines that prefer to stay away from the strict and sometimes stubborn regulations of the DOs.

Each region has its own distinctive grapes, soils and climate. Imagine yourself travelling, in just one dinner, from rainy, green Galicia to drier, mild Rioja, and onto a sip of a powerful red from Ribera (extreme continental weather in your glass) and finishing with a sweet Malvasía from Lanzarote, where vines are capable of surviving in ongoing drought conditions.  Any type of wine you may think of (sparkling, white, rosé, red, sweet, fortified, liquor…), except probably icewines made out of naturally frozen grapes - you’ll find it in Spain.  See A practical glance at Spain's wine regions to get a deeper insight into the huge diversity of grapes and winegrowing regions in Spain.

Spanish wine can help you save money. Take Sherry for instance, which may be the biggest bargain in the wine world. Can you think of any other wine, aged for five years (or longer), capable of being so distinctive, delicious and at such great price? Mid-priced cava -I would avoid the cheapest stuff- offers great value and brings bubbles and happiness to your glass at a fraction of the cost of Champagne. Many humble-looking regions, which in the past made their living producing bulk wines, hide a treasure-trove of local grapes and astonishing old vines. Campo de Borja and Calatayud in Aragón, Toro and Cigales in Castilla y León, Manchuela and Almansa in Castilla-La Mancha, and Jumilla and Yecla in Murcia are all precious sources of reds full of character which are sold at extremely attractive prices.

What about Rioja? The best known Spanish appellation produces plenty of affordable entry-level reds. In fact, most of the top ventures in the area have a Crianza or equivalent that reflects the style of the house, thus allowing a wider choice for consumers.

Recession, although a really tough issue in Spain, is proving to be advantageous for wine lovers worldwide. In fact, it has brought a new generation of affordable reds to the market from regions like Priorat and Ribera del Duero which used to command the country's highest average prices. Moreover, top producers that seemed to be primarily focused on highly exclusive labels -the likes of Álvaro Palacios, Peter Sisseck or Benjamín Romeo- have released some attractively priced wines over the last few years.

There are many new grapes to discover in Spain at the moment. I don’t mean just local varieties like Tempranillo, Garnacha, Cariñena, Monastrell, Mencía (reds), Albariño, Verdejo, Godello, Treixadura, Viura or Xarel.lo (whites) which can be found rather easily in many wine shops. Although productions are usually quite small, adventurous wine enthusiasts would probably be thrilled by the idea of tasting some outstanding reds and whites that come from much more exotic grapes.  It is not surprising therefore that this category has turned into a much loved bastion for wine geeks.

Here are some of their often exotic names if you want to get acquainted with them. They are listed by regions:

Canary Islands: This is a paradise for grape-obsessed consumers. Many varieties that no longer exist within the Iberian Peninsula are still grown in this volcanic archipelago. Situated almost at the same latitude as the Sahara desert (Morocco), wine wouldn’t be possible without the influence of the trade winds. Some (quite difficult to pronounce) names that may enlighten your palate are: Listán Blanco, Forastera, Marmajuelo, Güal, Vijariego (white), Listán Negro, Negramoll, Tintilla, Baboso Negro and Vijariego Negro (red).

Albillo, which can be found in Sierra de Gredos (Madrid and Ávila), various areas of the two Castilles and even in the Canary Islands, should also be included in the list. Note though that there are two different types of Albillo, Albillo Real and Albillo Mayor.

Even Rioja has become a land of exotic grapes! Just take a look at new single-varietals made from Graciano, white and red Maturana, white Tempranillo and the extremely rare Monastel.

Due to historic circumstances, certain wines, which are regarded by experts as unique, can only be found in Spain. This group includes Sherry and its vast array of fortified wines, with a special mention of PX (Pedro Ximénez). The thick, blackish and voluptuous nectar made out of (white!) dried grapes becomes extremely complex with age and is mainly produced in DO Montilla-Moriles (Córdoba). The other distinguished member of this club is Rioja Gran Reserva. Although white and rosé Gran Reservas also exist, this category consists mostly of reds which are aged for a minimum of five years before being released. Some historic producers however stretch this period to a whole decade. Although located in Ribera del Duero, the famous Vega Sicilia Único should take a leading position in this group.

It seems quite obvious that the greatest wines come from the greatest terroirs, so as long as there are great wines in Spain, the country can claim to have its own great terroirs. Nevertheless, our two historic regions, Rioja and Jerez, have traditionally favoured blends, so the notion of cru, even when applied to a village, has been the exception rather than the rule. But things are changing dramatically in that respect. Over the last few years, many extraordinary vineyards have been identified, painstakingly looked after, and bottled separately vintage after vintage. A ‘Burgundization’ (if I can use this term) is clearly taking place in the Spanish wine world. For instance, a small appellation like Priorat recently established a village classification. That seems far more complicated in large areas like Rioja, where business interests override terroir romanticism, but nevertheless a new generation of vignerons is flourishing all over the country (Rioja included).

The official approval of the “Vino de pago” category in the 2003 Spanish Wine Act hasn’t helped either. The main problem to my mind is that it allows an individual appellation for a single property -I’ve counted 15 ‘Château Grillet’ in Spain to date, but there may be more by the time you read this- instead of identifying a number of crus within an appellation. In fact, Catalonia is the only place in which vino de finca is included in the DO thus following the well-known French model.

I’ll write in detail about this in the future. For now, I prefer to draw your attention to the fact that many current single-vineyard wines can be especially appealing and enjoyable, although these stimulating flavors logically go hand in hand with productions limited to the size of the vineyards they come from.

Would you make room for a few Spanish bottles in your precious Bordeaux- and Burgundy-based cellar? Ribera del Duero’s Vega Sicilia is likely to be the Spanish brand that has most clearly earned its place among fine wines worldwide. But there are many others that could equally appeal to collectors. Imperial Gran Reserva 2005, for instance, was awarded first place in Wine Spectator’s Top 100 list - never before had a Spanish wine achieved such an honor. Great Riojas, Riberas and Priorats, together with top labels from other outstanding ventures located in specific areas of the country, would undoubtedly add an exotic and intriguing touch to any well-stocked cellar.

Five Verdejo wines that tell a different story
Tasting natural, biodynamic and extreme Spanish wines
US importers who champion Spanish wines
Spain’s best somms reveal their top Christmas wines
Top wines and tables in Mallorca
What to expect from the 2016 vintage in Spain
New campaign to bring wine back to the daily life of Spaniards
A practical glance at Spain's wine regions
From Cava to Quebec, the changing landscape of Spanish wine in Canada