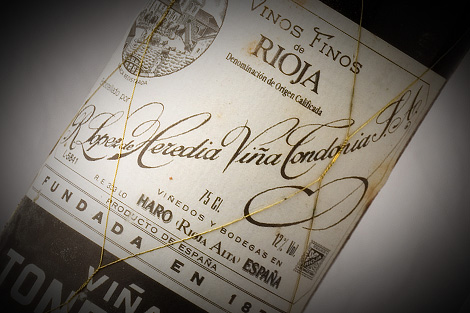 The anonymous vintage of 1979 has left an indelible mark: the birth of a lifetime’s terrible, beautiful passion. Photo © Pepe Franco

Pinpointing the exact moment I discovered wine isn’t easy, but I can identify a few early epiphanies. And all subsequent experiences owe something to those epiphanies, which have coloured and influenced my wine tastes and passions, as well as the trajectory of discovery.

In the 1980s I was an undergraduate philosophy student at the University of Kent. Like all students, I was more interested in beer than wine - I loved traditional English ales. But for two summers I got into the habit of drinking the Crianza-level Viña Real, a classic table wine from the venerable CVNE of Rioja Alavesa, at my parents’ house in Barcelona. In 1987 it was the 1985 vintage classified as "Good" by the Consejo Regulador. It must have been my family’s everyday drinking wine at the time, and typically we would drink this wine with the Catalan staple pa amb tomàquet, cheeses, a cured meat like fuet or llonganissa and a salad. I adored this wine. With no other point of reference, I studied it assiduously, looking at the label, noting the details: Rioja Alavesa, on the little map with the other two Riojas (Alta and Baja); the alcohol level, which might have been around 12.5% - then typical, now quaintly low; the bottle shape, which was Burgundy - although I didn’t know that then, but I knew it was one of two established shapes, and I wondered if this meant anything. And of course I studied the wine itself, working out from first principles what it tasted like, what fragrances and flavours I could identify: cinnamon, vanilla, tobacco leaves, pine needles, cherries, plums. I forgot about this wine during term-time, in England, distracted by ale.

But by December 1988, I had heard or read enough about wine to know two things: that wine was capable of greatness, and that I had tasted something I liked a lot. So I set out to buy the best bottle I could afford to celebrate my 21st birthday. I went up to London to a shop in Charlotte Street, Soho, which is long-gone, a little delicatessen specialising in gourmet products from Spain. I had a limited budget, perhaps £20 of the day, and made a purchase on the shop owner’s recommendation: a bottle of Viña Tondonia from the 1979 vintage. I now know this must have been a Crianza. The vintage was rated “Satisfactory” by the Consejo Regulador, and López de Heredia chose not to make a Reserva or Gran Reserva in that year because it was an unremarkable vintage, perhaps even a very bad one. Only the great winemakers can get something passable or even decent in a difficult vintage. Greatness is not just about transcendence or the sublime - it’s about consistency in the face of adversity. So I was sold the most basic red wine, from a poor vintage, from a great winemaker. Did this matter? Not on the day. On the day, it was the most hypnotic, complex and charismatic wine I had ever tasted. I drank it with a great friend in a ramshackle, bohemian seafront house in Whitstable called Bellbottoms. I looked for beauty and I found it: it was nine years old - too old for a Crianza from a weak vintage. But perhaps this is why it was so attractive. The tannic vigour and definition I was more familiar with from the CVNE wines was absent. Instead I found a soft, velvety mouthfeel, a multi-layered fragrance of molasses, carob, prunes, cherries, cigar box, charcoal, a touch of mint, and a slightly melancholy mushroomy note, reminiscent of ancient cobwebbed cellars, long-lost secrets and whispers of history.

This paved the way for my lifelong passion for wine - in particular three things: (1) Tempranillo, a variety more versatile than people think (compare a modern Ribera del Duero with a traditional Rioja, or a Toro - spectacularly different); (2) a fascination for what happens to wines as they age; and (3) a realisation that wine knowledge is particularly given to the art of classification and cross-referencing - vintages, varieties, regions, labels, brands, winemakers, soils, terroirs, and an infinity of adjectives. This is very appealing to my slightly nerdy collector’s mentality. I collect words and numbers and what they mean, endlessly refining definitions in my head, looking for precise correspondences in the world. Combining this with a hedonistic pursuit like wine is irresistible and has marked the course of my life ever since.

So Tondonia was my wine epiphany.

If you search for the 1979 Crianza  you won’t find it. It’s not on a worldwide search on Wine Searcher; it’s in no one's collection on Cellartracker. This is not because Crianzas can’t age. On the contrary, the good or great vintages of 1964, 1968 and 1978, for example, show commercial availability and/or records of private stock and extensive, enthusiastic tasting notes. The sad, anonymous  vintage of 1979 has vanished without trace. But in me, it has left an indelible mark: the birth of a lifetime’s terrible, beautiful passion.

It appears that López de Heredia stopped making the Tondonia Crianza about a decade ago. The last one I can find anywhere is the rather feeble 2002 vintage. There are none available in the UK. Several merchants stock Reserva Tondonia, however. For £30, Noel Young Wines has the outstanding 2001. You can also buy it for £32.95 at Roberson Wine. The cheapest 2001 Reserva in the UK appears to be available from West Mount Wine of Huddersfield, at £25.99. The vintage closest to 1979 is the 1980 Reserva, available from Berry Brothers for a whopping £175 for one bottle.

If you want a Gran Reserva, the cheapest one in the UK is the 1994, at £53.99 from AG Wines. If what you’re after is true greatness, and you are the owner of a large wallet, the legendary 1964 is available for just over £400 for one bottle from Hedonism Wines.