Innoble is a really fun event held every other year in Sanlúcar de Barrameda featuring some quality producers from Andalucía and other parts of Spain. Hosted by Armando Guerra from Taberna Der Guerrita and Canarian wine distributor and producer Rayco Fernández, it allows for some serious tasting but it’s also a chance to mingle and chat with die-hard wine lovers and professionals alike in a convivial and relaxed atmosphere.

Being one of the first informal events after so many months of pandemic, it has taken us a couple of weeks to recover and work through our tasting notes, but the result is certainly interesting.

All of the wines included in this piece reflect some exciting trends in the Spanish wine scene and cover a wide variety of styles. Most of them have either just been released or are due to be launched after the summer or, at the very latest, in time for Christmas. A couple of them are not really new, but we couldn’t resist sharing them with you readers.

This is the first of a two-part series on Innoble wines. This one features sparkling wines, whites from outside Andalucía and a rosé. The next one will be devoted to white and fortified wines from Andalucía and reds.

In an industry like the wine business, which demands immediacy and constant novelty, patience is a virtue that is generally underrated. Fortunately, there are wineries like Recaredo that not only made a commitment 60 years ago to the long ageing of their Brut Nature sparkling wines with indigenous varieties -their first Reserva Particular was made in 1962- but also carry on with this philosophy, taking bottle ageing to new extremes.

This 2004 vintage, which was marked by rain and moderate temperatures, comes from three vineyards planted between 1950 and 1955 with Xarel.lo and Macabeo and was first released with 110 months of ageing in the first of three editions comprising 1,200 numbered bottles each. The second batch, launched at the end of 2020, was aged for 185 months in the bottle and is the one we tasted at Innoble. Deep, silky-textured and complex, it is a wine with fantastic energy,delicate mineral purity and oozes real class.

With such long ageing, the price naturally rises but it is still much more affordable (and easier to find) than similarly aged sparkling wines from other latitudes. Cuvée 3000 sells it on their website for €126.90 but if you don't have that kind of money now, you can always save up and wait to get hold of a bottle in late 2023 or early 2024, when the third limited edition is expected to be released. 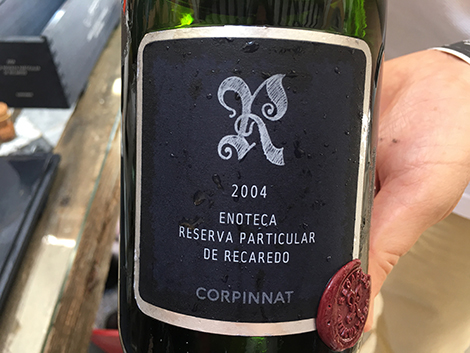 Tintilla was the first variety that the brothers José and Miguel Gómez started to work with at Vinifícate, which they launched in 2011. Their first wines were dry reds, but over the years and with the success of their Mahara brand, they have expanded their range of varieties, styles and references.

In this expansion, ancestral sparkling wines are gaining more and more ground at Vinifícate and now represent a third of their total annual production of 30,000 bottles. One of the latest arrivals is Amorro Rosé, whose 2020 vintage was recently launched. As its name suggests (a morro means to drink straight from the bottle), it is a light-bodied, easy to drink wine, with fine mousse, fresh fruit notes and intended for immediate enjoyment.

It comes from pago Añina in Jerez, from a Tintilla vineyard planted on albariza soils which was recently integrated into the project. It is made only from the free-run juice, which ferments spontaneously in plastic containers and spends eight months resting in the bottle. In their eagerness to work in the least interventionist way possible, the Gómez brothers only add SO2 at bottling. Of this third vintage, 1,500 bottles have been produced and are available for purchase on the winery's website for €12. 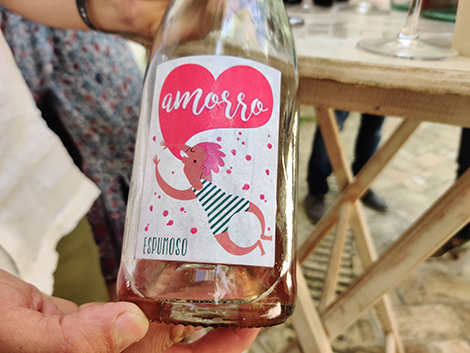 This is one of the new single-vineyard wines recently launched by cousins Leo and Roc Gramona, the sixth generation of a saga of reputed sparkling and still wine producers in Penedès. L’Enclos de Peralba is part of the ups and downs of a generational change in the family business. While the cousins are in the process of taking the baton from their respective fathers, Jaume and Xavier Gramona, L’Enclos de Peralba offers the perfect setting to unleash their creativity. For now, the portfolio includes a pét-nat and several still wines made with indigenous varieties sourced from family-owned vineyards or belonging to local growers.

Els Presseguers (peach trees in Catalan) falls in the second case, thus the label bears the name of the farmer. The plot lies at 450 elevation in Ordal, a high area in Penedès. The wine is serious, fresh, aromatic, well-defined, with good weight on the palate and shows great potential. Less than 2,000 bottles were produced (find it for €17.35 at Decantalo). This wine undoubtedly helps to define the character of Xarel.lo, the region’s signature white grape, when it is sourced from specific terroirs in Penedès. 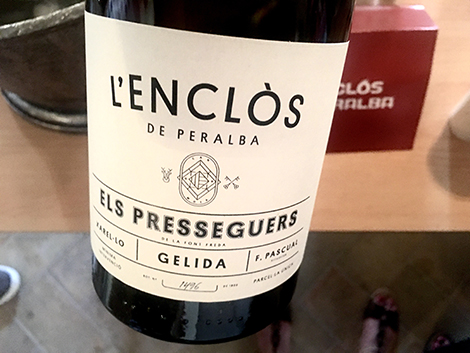 Set to be released in September for €28-29, Dominio de Atauta is one of the producers who has embarked on producing Albillo Mayor whites following the recent acceptance of this variety by Ribera del Duero's Regulatory Council. In the case of Dominio de Atauta, they have selected the white vines planted in some of their oldest and most valued vineyards: La Mala, Llanos del Almendro and Valdegatiles.

In this first vintage, they experimented harvesting at different stages of ripeness and tried various winemaking techniques (fermentation in stainless steel tanks and ageing on lees, maceration and fermentation with skins, fermentation in barrels in the case of grapes harvested later... but always using indigenous yeasts); then, the most interesting batches entered the final blending. The wine is more aromatic than the average Albillo Mayor with hints of citrus and aniseed aromas, more vertical than opulent on the palate, with tension and plenty of potential for further development. With the growing number of whites from Ribera del Duero, a comparative tasting of areas and styles may be and excellent idea, don't you agree, wine lovers? 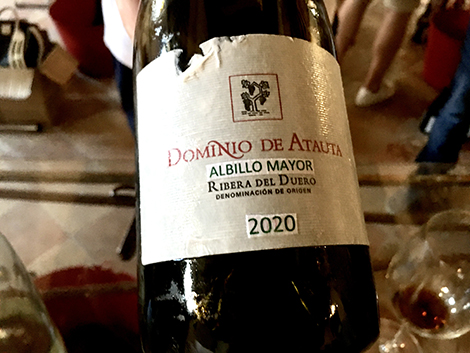 Probably one of the rarest and most exotic whites we tasted at Innoble, not only because of the varieties it is made from -Forastera Blanca, Gual, Baboso Blanco, Listán and Vijariego Blanco- but also because of its origin in El Hierro, the most remote and unspoilt island of the Canarian archipelago. In addition to distributing wine and co-organising Innoble, the inimitable Rayco Fernández is the driving force behind this project that recovers some of the 167 hectares of vineyards remaining on this small territory with a great diversity of soils and climates. He counts on the support of winemaker Pablo Matallana, who was also at Innoble presenting his Taro wines from Lanzarote, and a team of winemakers and carers such as Esaú Suárez, an engineer and hippy in equal parts who manages the day to day of the winery.

This white wine comes from a single plot with volcanic soils grown organically in the northeast of the island at 650m elevation. The destemmed grapes are fermented and aged for 10 months in French oak barrels. What is most striking about this wine is its remarkable acidity (10.5g) wrapped in saline notes and volcanic hints. Far from being too harsh, it delivers a crystalline and refreshing palate, with great tension. The only downside of this wine is its low production -under 400 bottles- so this vintage is practically sold out but you can still buy some bottles at Mentta for €39. 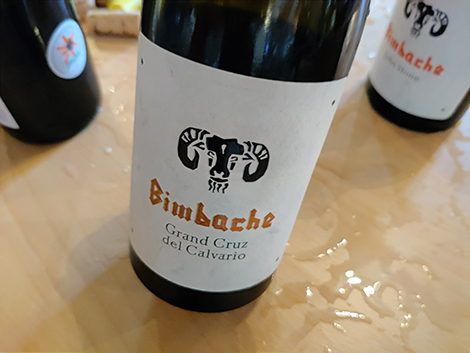 This is not exactly new, but it is fascinating how this wine manages to combine the local tradition of aged Rioja with David Sampedro's philosophy of fermenting almost all of his whites with skins. In younger cuvées, the style is very close to orange wines and hence not easy to identify as Rioja. But the case of Phinca Revilla is completely different thanks to the influence of time.

After fermenting with its skins for about seven days, the wine is pressed and left to age for six years in oak barrels. While the ageing adds glycerin as well as a creamy, enveloping texture, the resulting oxidative character -the wine remains practically untouched during the whole ageing period- brings it closer to classic, long-aged riojas. It is a charming blend of two worlds, modern and traditional, in the same bottle. It also cleverly revives the traditional sixth-year mention (“sexto año”), used for wines bottled and released on their sixth year of life. Find this wine for €73.25 at Tanino Wines. 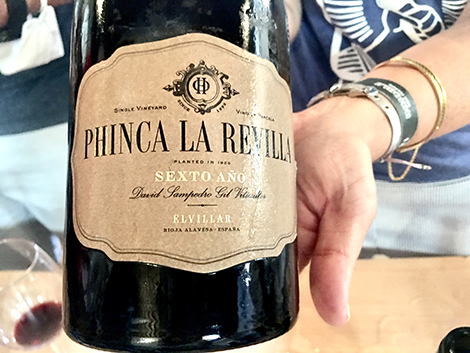 Rosé wines are not abundant in Cádiz, but Alejandro Narváez and Rocío Áspera, the couple behind Forlong, have no qualms about experimenting with varieties, blends and containers to bottle the wines they like and embellish them with fun labels. This Forlong Rosé is undoubtedly original as it combines 60% Cabernet Sauvignon -in previous vintages it was 100%- with 40% Tintilla de Rota grown organically on their Balbaína estate.

It is halfway between the Provençal-style onion-skin rosés and the darker wines from Navarra (it is directly pressed, rather than bled), with strawberry notes and subtle vegetal hints. The palate is fresh while the finish, saline and chalky, invites you to drink. Perfect for the summer and at an affordable price for all budgets (€10.90 at Dealbariza). 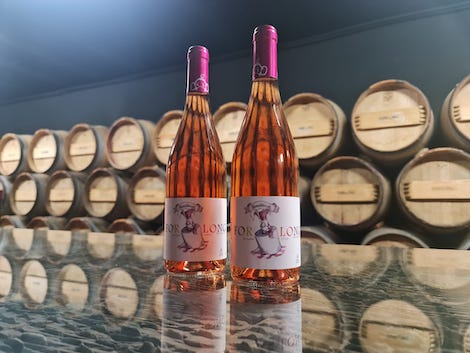 15 Spanish wines to mark the end of the lockdown
Twenty unforgettable wines we tasted at Vinoble
Unfortified whites from Jerez: back to the roots and the soil
Our favourite releases tasted at Innoble Wine Fest (and II)