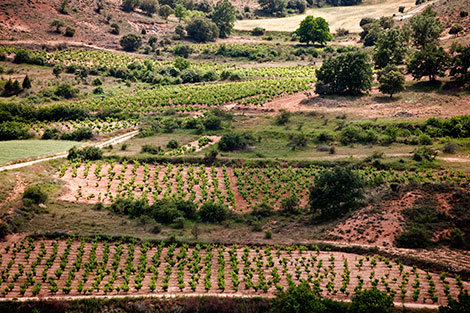 Due to its high altitude (980-1050 metres), its location close to the limits for wine-growing and the sandy nature of the soils that skipped phylloxera and make for a significant amount of ungrafted vines, the valley of Atauta (on the eastern end of Ribera del Duero and within the province of Soria) is the source of distinctive reds within the region.

The existence of an ancient winery district proves the long winemaking tradition in the area although it has sadly and long ago fallen into disrepair. The austere and harsh moorland landscape is the result of an extreme continental climate. It is not uncommon to see vultures flying over the valley and wild boars are among the major threats to the vineyard. Wild grass and aromatic herbs (lavender, thyme) grow among the vines, their scent showing occasionally in the glass. Wines are firm and mineral offering deep and concentrated flavors; bottle time is needed for wines to develop and show their true potential.

Dominio de Atatuta was founded in 2000 by Miguel Sánchez, a Soria-born wine merchant, with the aim of recovering this great heritage of historic vineyards. In the late 2000s the winery was acquired by Avante Selecta group, later renamed as Terra Selecta.

Dominio de Atauta owns 21 hectares of vineyards and manages another 22 made up of a mosaic of almost 600 pre-phylloxera (120 to 140-year-old) Tinto Fino (Tempranillo) plots. Underneath the sandy and clay soils lie limestone rocks found at different depths but diversity is notable depending on whether the vineyards are located in the valley, the slopes or the moorland, allowing for a large single-vineyard range of wines. With regards to winemaking, fermentation takes place in stainless steel tanks, cement and wooden vats with capacities ranging from 1,000 to 10,000 litres. The winery is built into the rock, taking advantage of the slope to work by gravity on four different floors.

Seven different wines and 100,000 to 120,000 bottles are produced annually, including five single-vineyard selections. The flagship red, Dominio de Atauta (40,000 bottles, €26), comes from vineyards grown on the central part of the valley where clay is dominant. It clearly reflects the strong mineral character of the area. Parada de Atauta (50,000 bottles, €19) is a relatively new label that aims to provide a friendly and immediate approach to the area by fcousing on sandy soils around Atauta.

The five single-vineyard cuvées rarely exceed 1,000 bottles and prices range between €100 and €250. Llanos del Almendro comes from a plot located in the valley with extremely poor sandy soils. The soil in Valdegatiles is deeper and richer in clay adding structure and power. La Mala has the shallowest soil: sand over a thin clay layer on top of the limestone bedrock. Grapes for La Roza are sourced from three tiny plots with the oldest vines planted at the highest elevation (985 metres). Finally, San Juan comes from the eponymous valley adjacent to Atauta with distinctive poor, sandy soils that translates into a fine, subtle red.

There is a second winery called Atalayas de Golbán focused on producing good value wines. Half of the grapes are sourced from vineyards in Soria; the other half from a variety of villages in the province of Burgos to the west. Production is larger, around 300,000 bottles, and the range includes Viridiana Roble (around €8 in Spain) and two brands with ageing times similar to a Crianza: Atalayas de Golbán can be found locally and La Celestina (€12) is sold in Spain and abroad.