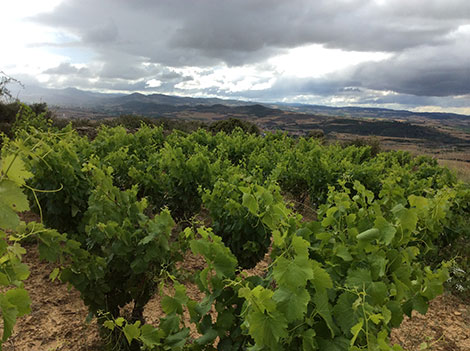 Tempranillo has been the fastest growing variety in Spain between 1990-2009, with a surface increase of 223,389 hectares. It is widely planted throughout the country and has become a trademark element of Spanish Crianza wines worldwide.

Seventeen varieties have seen their share of surface area expand considerably. Syrah, Merlot, Chardonnay, Albariño, Sauvignon Blanc, Godello and Treixadura have grown from a few hundred hectares in 1990 to the current 5,000-22,000 hectares. Syrah's case is particularly noteworthy – its surface has risen from eight to 19,045 hectares in that period. Plantings of Cabernet Sauvignon, with 2,090 hectares in 1990, continue their upward trend.

Another fast-growing group includes native varieties which were intensely local or have been rescued from near-extinction, but are now extensively planted. It is the case of Hondarrabi Zuri (Courbu Blanc), Loureira, Sousón, Torrontés, Espadeiro, Pedral and Parraleta. Except for Parraleta (Somontano) and Hondarrabi Zuri (found in txakoli Basque-producing areas), most are high quality indigenous grapes from Galicia which are bringing singularity to the wines from this northwestern area of Spain. In terms of foreign varieties, plantings of Cabernet Franc and Gewürztraminer have increased from a few dozen hectares in 1990 to 717 and 313 respectively in 2009.

There are only eight varieties whose surface size has remained unchanged since 1990: Juan García, Mollar Cano, Malvasía Aromática, Forastera Blanca, Mencía, Parellada, Malvasía Volcánica and Macabeo. Two of them -Macabeo and Parellada- are used to make Spanish cava. Four are grown in the Canary Islands, indicating that the region's surface under vine and grape patrimony are free from external interference – and should be kept that way.

34 varieties have seen their surface under vine reduced. The most significant cases are Fogoneu, Moristel, Garnacha Blanca, Merseguera, Alarije, Rufete, Vidadillo, Trepat, Garnacha Tinta (one of the largest drops), Pedro Ximénez, Palomino Fino, Mazuelo, Zalema, Airén (still occupying the largest extension despite having lost 223,000 hectares), Monastrell and Xarel.lo. Most of these grapes are found in the south and the south-east, in regions where surface under vine is decreasing or where grape plantings are changing radically.

There were 20 minor indigenous varieties which had no plantings in 1990, either because there were no statistics or because they were unknown. Nowadays, they occupy over 890 hectares. Among them are Albarín Blanco, Baboso Negro, Baboso Blanco, Callet, Carrasquín, Lado, Maturana Blanca, Maturana Tinta, Tempranillo Blanco, Derechero, Pensal Blanco, Merenzao, Listán Prieto and Vinyater. These vines grow across the country, particularly in Galicia, Canary Islands, The Balearics, Aragón and Rioja. Their case can be compared to Petit Verdot, which had no presence in 1990 but now occupies 1,914 hectares, twice the number of recovered native varieties.

There are 40 varieties which fail to appear in official statistics. They currently have no known plantings but were present in Spain before the arrival of phylloxera, as Nicolás García de los Salmones mentioned in his General Study of Spanish Vinifera (1914). Some of them are: Allarén, Batista, Castellana Blanca, Epero de Gall, Fernandella, Gabriela, Hebén, Legiruela, Mantuo de Pilas, Palote, Quigat, Rayada Melonera, Sabro and Trobat.