November is a busy month for Vega Sicilia’s winemaking team. Not only do they make decisions about the latest vintage; they also inspect all the wines stored in oak and blend their two extended ageing reds: Único and Único Reserva Especial.

The Único Reserva Especial is a multi-vintage red. This classic style gradually lost favour from the 1970s onwards but it is now experiencing a renaissance due to its rarity and limited availability -a bottle in Spain costs upwards of €400. In contrast, Único, Vega Sicilia’s flagship red, is a vintage wine whose production can exceed 90,000 bottles in good years and retails at about €350 in Spain.

We wrote extensively about the Reserva Especial in an article on multi-vintage blends published in SWL a couple of years ago in which we mentioned that Único could include small amounts of other vintages in its blend. This time, winemaker Gonzalo Iturriaga guided us through an exhilarating tasting; we tried different batches destined to Único to understand the ins and outs of a wine that, as he put it, “is gradually pieced together”.

Located in the village of Valbuena del Duero, in Valladolid province, Vega Sicilia is a vast property with 210 hectares under vine stretching from the vicinity of the river to the rugged areas fringed by pine forests on the way to the paramo (moorland). The vineyard is split into different plots (see the map below), each of which has its own alcoholic and malolactic fermentation tanks, hence the highly precise traceability in the winery. 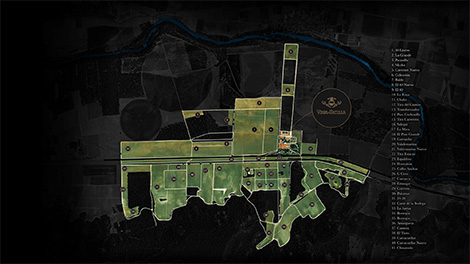 The oldest vines, with more structure and character, are destined to Único. With very few exceptions, these 40 hectares are bottled as such. Additionally, of the recently planted 25 hectares, 10 of them are good candidates to be part of this wine in the future. “They will help us to have a wider choice and also to be prepared against weather phenomena like frost and hail,” Gonzalo Iturriaga points out.

On paper, everything seems tried and tested, but the first year of ageing helps to tell which batches are destined to Valbuena -the estate red released on its fifth year-, and which ones continue their way as Único. According to Iturriaga, it is easier to upgrade some Valbuenas rather than to downgrade Únicos. On this first year, wines are aged in oak barrels, 70% to 80% of which are new, but wooden vats may be used occasionally. At the end of this stage, wines with finesse and moderate structure are identified as Valbuena; those with firmer, noble tannins and distinctive length join the ranks of Único.

A combination of seasoned oak barrels and wooden vats are used on the second year of ageing. Vats are filled with the fuller-bodied reds and can be used both for Valbuena and Único, except that Valbuena’s affair with oak finishes at the end of this period.

Deciding the right vessel is not only a matter of style; the vintage also plays a part. “A warm, dry year like 2017 doesn’t need much oak, but 2018 was a bit diluted and will perform better in seasoned oak,” Iturriaga explains. Similarly, the amount of American oak, which usually ranges between 15% and 30%, is higher in years with less concentration, but is reduced to a minimum in powerful vintages. “Whilst we use barrels to get some sweetness in the mid palate and round tannins, large oak vats refine and lengthen tannins while lending finesse and verticality".

The importance of wooden vats

Restricted to the Único range, the third year of ageing is done in large 22,000-litre wooden vats. One of Gonzalo Iturriaga's main priorities since he joined the company in 2015 was to increase the capacity to mature wines in these large formats -from 330,000 to 402,000 litres.

At this point blends become increasingly complex, as small percentages of other vintages are added. The EU's 15% allowance from other harvests in vintage wines is extremely useful and reasonable in long-aged reds. A powerful vintage such as 2015, for example, benefits from a small boost of 2016, which delivers a touch of freshness and nerve. The high-quality, yet somewhat restrained 2014 is likely to improve with a small addition of the full-bodied 2015 and a little bit of 2013. In general, older vintages provide complexity while the younger ones bring freshness.

What really distinguishes Único's ageing process is the three years spent in oak vats. Throughout this period, new elements are gradually incorporated into the wine, often in tiny amounts of as little as 2% or 3%. Whilst older vintages are usually added between the third and fourth year, younger vintages intended to refresh the wine are blended in during the later stages of ageing.

An interesting fact is that many of the remnant wines replaced by the new additions are used to enrich blends destined for the Reserva Especial. The key in this process, says Iturriaga, is to get it right so that the wine can rest untouched for a whole year. Smaller, 8,500-litre vats also come into play at this stage in order to square lots. And there are more things to keep in mind: for example, old vats are better suited for old wines.

What is the lifespan of an oak vat? Provided there are no microbiological issues, Vega Sicilia replaces the large 22,000-litre vats after 10 to 11 years and the smaller ones after eight years. From this moment onwards, they say, tannins are a bit drying. It should also be noted that vats must be kept full at all times, so a series of bad vintages in this region with extreme climate would certainly be troublesome. Now that anti-frost towers are in place in the property, hail is the most feared phenomenon.

The art of blending

The final blend, which takes place between the fifth and sixth year of ageing, is followed by a homogenization phase in stainless steel tanks that can last between eight and ten months. Then, the wine is bottled and left to rest for about four years and a half before its release.

Obviously, there is room for plenty of variants within this general recipe. I had the opportunity to experience this in a tasting of several batches with Gonzalo Iturriaga. He replicated some of the wines blended by the oenological team (Bordeaux consultant Pascal Châtonnet is also involved in the process) in different vintages that are currently being aged in the cellar.

Take for instance 2016, a vintage set to be bottled near the summer of 2022 and released in 2026. It was a generous harvest both in terms of quantity and quality -around 100,000 bottles will be produced.

The central core are two large vats: the first one, which provides ripeness and mid-palate, has a very small addition of 2017; the second one, contributing the necessary punch and freshness, includes minimal amounts of 2015 and 2017. The rest of the blend includes another large wooden vat that Iturriaga describes as a "complex backbone" featuring the 2018, rounded up with slightly higher percentages of 2015 and 2014; a small vat with the charming character of the plots grown next to the forest (sapid, silky tannins with crisp fruit) on distinctive gypsiferous marl soils; and finally, a touch of a fresh, lovely scented 2018 (flowers, lavender).

Using a test tube, Iturriaga replicated the percentages of the final Único 2016 blend. This resulted in a red wine with high aromatic intensity, herbal and nutty (hazelnut) undertones, dark chocolate and plenty of energy to start the bottle ageing stage.

The fresh, perfumed 2018 batch that refined the Único 2016 blend has also been used to infuse joy and tame the slightly rough tannins of a 2017 batch before entering its fifth year of ageing. Being a highly concentrated vintage, Iturriaga is positive that 2017 will need more "assistance". Apart from 2018, small additions from 2016, another fresh vintage in the area, are also incorporated. On this occasion, the core will feature the property's most elevated plots, which produced the freshest, most expressive wines in 2017.

Thus, there is not just one single blending process prior to bottling Único, but a succession of yearly reassessments meant to guide the following 12 months of ageing. This is the reason why Iturriaga argues that the vintage character is most purely present in Valbuena. Yet it is also important to understand that the blending concept in Único is not limited to small additions from other vintages, but also to highlight the specific features of the various plots in the estate. The character of the elevated, north-facing vineyards grown on limestone-rich soils emerged clearly while tasting the different batches of the 2018, 2017 and 2016 vintages.

Additionally, the complexity of the process explains both the aura of mystery that has always surrounded Único as well as its distinctive character, despite the logical evolution of the wine over time. The current period under Gonzalo Iturriaga's direction will be marked by the prominence of large ageing vessels, in search of freshness, elegance and refined tannins. These little changes won't be seen until the release of the 2014 vintage and most notably 2015, the first in which he had full control, in 2024 and 2025 respectively. From what we have been able to taste behind the scenes, 2014 combines tightness and refined texture, while 2015 shows the sapidity of the property's fresher plots combined with fresh minty notes.