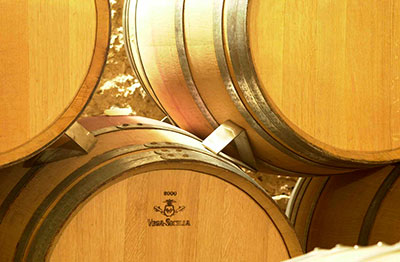 Spain’s most legendary winery celebrated its 150th anniversary in 2014. Located in Valbuena de Duero (Valladolid), the estate covers 985 hectares, 210 of which are planted with vines and 500 are pine forests. Bottling wines in Ribera del Duero is a relatively new activity (the appellation was established in 1982) so Vega Sicilia has been an isolated spot until very recently —a wine oasis far away from Jerez and Rioja, Spain’s main quality regions.

Eloy Lecanda founded the winery in 1864 and brought cuttings of noble Bordeaux grape varieties which he planted next to local Tinto Fino (Tempranillo), but as far as we know the first Único was made in 1915 under the ownership of the Herrero family. It was crafted by winemaker Txomin Garramiola applying Bordelais techniques, just as Rioja wines would have been made at that time. Garramiola was brought to Vega Sicilia by négociant Cosme Palacio when he hired the Duero’s winery after the phylloxera plague reached Rioja.

The estate was later purchased by Prodes, a company specialized in seeds, and then sold to Neuman, a Venezuelan family, until it was finally acquired by the Álvarez family in 1982. Astonishingly the wine managed to maintain its unique and distinctive character throughout the years. Garramiola’s legacy was transmitted to figures like Martiniano Renedo and very especially to Jesús Anadón. Mariano García, winemaker between 1968 and 1998, was the son of one of the farm workers.

The Álvarez family has faced many challenges such as updating facilities, expanding the surface under vine to produce single estate wines; implementing high quality standards and making all the necessary changes to keep the winery’s reputation intact in an increasingly crowed and competitive wine world. “The wines are not what they used to be 50 years ago; the style has changed towards fresher wines that spend less time in oak and longer time in bottle, but they still retain their distinctive character,” explains manager Pablo Álvarez.

Brand new facilities include 81 fermentation tanks in order to reflect different plots in the estate. This has allowed wines to "gain precision". There are cold chambers now, sophisticated sorting tables, a system designed to use gravity and pour out the grapes directly into each vat and even a “wine lift”, used to carry fermented wines to a lower level where they are lay to rest in casks. Brand new wood casks are the norm —none of them over six years old. American oak barrels are still made in the winery at a new, large and mechanized cooperage that is proving to be highly effective.

The wine’s distinctive character is due to long aging times in barrel, large oak vats and bottle. Vega Sicilia Único (around 100,000 bottles in good vintages, €380 in Spain) is traditionally released as a 10-year old red and boasts a remarkable aging potential than enables it to stand face-to-face against some revered French crus. Second wine Valbuena (175,000 bottles, €135) is aged for five years, just as a Rioja Gran Reserva. The rarest of the range is Vega Sicilia Único Reserva Especial (15,000 bottles, roughly €4530), a blend from three different vintages that exhibits a sophisticated and almost decadent complexity.

One of the healthiest and more profitable Spanish wine groups nowadays, Vega Sicilia includes the original winery -located in Valbuena de Duero; Alión, a second venture also located in Ribera del Duero (1991); Pintia in Toro (2001); Oremus in Tokaji (Hungary); and 50% of Benjamín de Rothschild & Vega Sicilia in Rioja —the result of a joint venture between both families. The latest addition is Bodegas y Viñedos Deiva in Rías Baixas (Galicia) where Vega Sicilia will produce two Albariños strating in the 2023 vintage.

Pablo Álvarez proudly states that the group has the potential to reach 900,000 bottles a year with an average price of €50 per bottle.

As you may expect, the winery is as exclusive as its reputation, so it can only be visited by appointment, like any Bordeaux first growth.

Our favourite wines in 2014
Touching wine heaven with Vega Sicilia
Xavier Ausàs: “I don’t forget that I’ve made a name thanks to Vega Sicilia”
Spanish talent blends in with the world's wines
Único 2006 recoups the essence of Vega Sicilia
Microbes, flamenco and an open-minded look at Spanish wines
“Sherry is not as exciting as we are led to believe”
Rioja and American oak: a slightly fading but still solid alliance
Are multi-vintage blends back in Spain?
Deconstructing Vega Sicilia Único
Tempos Vega Sicilia breaks new ground in white wines
Vega Sicilia, 150 years later
Six old wines that won our heart in 2022
Vega Sicilia Único 1942-2013