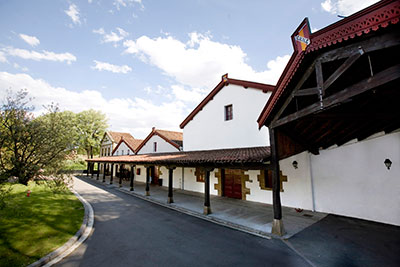 It is one of the historical wineries located in the traditional Barrio de la Estación neighbourhood in Haro and counted itself among the few wine companies listed in the stock market until they recently ceased trading. It was founded in 1879 by two Basque businessmen, brothers Eusebio and Raimundo Real de Asúa, along with Isidro Corcuera from Rioja. The group, one of the leading firms in Rioja, comprises Cvne, Viña Real and Viñedos del Contino,. Together they produce 8 million bottles and own 545 hectares of vineyards. In 2017, the group acquired Virxe de Galir in Valdeorras (Galicia) and Roger Goulart in Cava.

If Cvne's philosophy had to be summarised, two things would stand out almost since its beginnings: the group's concern for bottling its wines (stocks reached 80,000 bottles in 1900) and the powerful character of its reds. They have traditionally been less marked by wood than other Rioja classics and it is not unusual to find old vintages comfortably reaching 13% vol. Most of its brands, some of them legendary, have been around for a long time.

Monopole white was launched on the 1915 vintage. A new version called Monopole Clásico has been recently released. It is based on an old recipe which blended a small amount of Manzanilla purchased from the Hidalgo family in Sanlúcar de Barrameda with the local Viura variety to gain structure.

Imperial and Viña Real date from the 1920s and the renowned Cvne 3º año is the heir of Cvne Clarete, inspired in the Bordeaux clarets.

Cvne can also pride itself on always trying to be innovative. In the late 19th century, it installed a Malvoisin pasteurizer to stabilize the wines and to avoid any possible damages to the bottles during the sometimes long journey from the winery to the consumer's table. In 1989, at the start of the oenological revolution in Spain, Cvne built El Pilar, a gravity-driven winemaking facility inspired in traditional methods. This meant that the winery got rid of pumps, could systematically sort six million kilos of grapes picked on each harvest and reinforced extraction with the rack and return (délestage) system.

A recent development is the construction of Real de Asúa, a totally independent new winery within the group of buildings that form Cvne, which is entirely devoted to making the legendary Imperial and the modern Real de Asúa red. This last label, launched on the 1994 vintage, is only produced on excellent vintages as is the case for Imperial Gran Reserva.

Imperial Gran Reserva 2004 was the first Spanish wine to be named Wine of the Year by American publication Wine Spectator. Imperial, a blend of 85% Tempranillo, Graciano and a small percentage of Mazuelo, includes two bottlings – Reserva (€22 in Spain) and Gran Reserva (around €30).The grapes come from Rioja Alta, the coolest sub-zone in the DO, producing an elegant wine with excellent aging potential. Under the technical direction of María Larrea and thanks to the abundant resources currently available at the firm, the “Imperials” are going through a sweet moment. 2004, 2005 and 2007 offer excellent opportunities to discover their character, always ahead of other classics in terms of fruit and concentration.