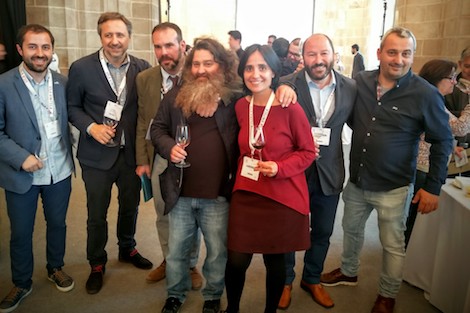 Every two years, a large number of wine professionals attend Alimentaria, a four-day trade fair in Barcelona. The wine tasting in pairs competition was one of the first, but there is an increasing number of side events held alongside the large fair, many of them open to wine lovers. Outside of Barcelona, there are interesting tastings like Cuvée 3000 showroom, which moves to Madrid for the first time, or a four-day course on the wines of Montilla-Moriles led by experts Paco del Castillo and Juancho Asenjo.

1-30 April. The Empordà region hosts a new edition of Vivid, with a month full of all kinds of wine tourism activities such as a hike among vines in Capmany, tastings and dinners, winery tours, exhibitions and various workshops. Prices vary based on the chosen activities, which are held in numerous villages around Empordà.

2-4 April. Art and wine come together at “Catas en Petit Comité” hosted by Amelia Pereira, owner of Ameli&Co. Seven people will be able to enjoy a snack plus the wines of Rioja wineries like Ostatu (April 2) Díez-Caballero (April 3) and Loli Casado (April 4) explained by the producers themselves at art gallery Juanjo San Pedro in Laguardia (Mayor de Migueloa, 5) in Rioja Alavesa. Time: 13:00 Price: €20

3,4, 9 and 10 April. Juancho Asenjo and Paco del Castillo lead a really interesting course to learn about the wines from DO Montilla-Moriles in Lavinia Madrid (Ortega y Gasset, 16). The four-day course includes several tastings and  explanations about the history and characteristics of the area, biologically aged wines, mixed and oxidatively aged wines and sweet wines. Time: 18:00 Price: €80  Anyone wanting to put all this knowledge into practice can attend a showroom on April 13 with the chance to taste over 30 wines and talk to their producers  (Price: €20 that will be discounted with any purchases).

From April 5. Cava producer Codorníu celebrates the 150th anniversary of the birth of architect Josep Puig i Cadafalch with a tour of the hand-excavated underground galleries, the winery and the Modernist Tower where the Raventós family lived until the 1980s and which is part of the Codorníu estate in Sant Sadurní, whose buildings are part of Spain’s Artistic Heritage since 1976. Visitors will be able to enjoy such at the Tower with two cavas: Reina Maria Cristina Blanc de Noirs Brut Reserva and Gran Codorniu Pinot Noir Vintage Brut. Time: 10:30 (Monday and Friday) and 13:00 (Saturday and Sunday) Price: from € 25 (children over eight years old from €19)

10 April. Imaginext is a full-day forum held in Logroño. This year the focus is on wine-applied technology with speakers such as Mireia Torres, director of innovation at Familia Torres, Santiago Vivanco, director of Fundación Vivanco, Manuel Hevia, general director at Vinoselección or Sergio Tavira, wine e-commerce manager at Carrefour, among others. According to the programme, there will be a “technological tasting” for attendees. Location: La Rioja Technological Central (Avda Zaragoza, 21) Time: 08:45 Price: €50

11 April. Former Contino winemaker Jesús Madrazo travels to Umami Gijón (Avda. Rufo Rendueles, 8) to present a mini vertical of El Sacramento, the wine he makes now in Rioja Alavesa alongside Etienne Cordonnier, a Belgian of Basque origin who owns Viña Leizaola, a small and interesting project in Laguardia. The wines will be paired with a menu prepared by chef Gonzalo Adaro. Time: 20:30 Price: €60

12 April. Aitor Trabado, author of specialist website orangewines.es, presents a tasting of European orange wines at Bodega Urbana in Bilbao (Gran Vía, 66). These are the wines that will be tasted, some made by leading producers in Austria, Italy, Slovenia and Croatia: Traminer 2012 by Gsellmann, Sauvignon Blanc Sonne II 2011 by Strohmeier, Origine 2012 by Vodopivec, Ribolla Gialla 2009 by La Castellada, Sivi Pinot 2016 by Batic, Rebula 2008 by Mlecnik and Milva 2009 by Roxanich. On top of this, there will be some snacks and Aitor has promised to bring a surprise wine. Booking necessary by phone (+34 94 441 61 81) or by email (info@bodegaurbana.com). Time: 19:00 Price: €35

12 April. Distribuidor Mikel Foronda has invited Rioja legend Basilio Izquierdo, former winemaker at Cvne, to his store in the Basque capital Vitoria (Portal de Arriaga, 50) to present his personal range of wines: Orange Wine, Acodo Tinto, B de Basilio Blanco, B de Basilio Tinto, Graciano and Garnacha. There will be a few bites to eat after the tasting. Participants will take home a couple of Basilio’s wines: Acodo Tinto and Acodo Blanco. Time: 20:00 Price: €40

15 April. If you failed to find a spot at Vila Viniteca’s Tasting in Pairs Competition in Barcelona you still have the possibility of attending the tasting as an onlooker and taste wines from more than 50 producers paired with a large artisan cheese selection. Time: 11:00 - 18:30 Price: €15 A day later, on April 16, La Música del Vi brings together over 180 well-known producers from Spain and beyond with a chance to try some amazing wines. Time: 11:00 - 20:00 Price: €220

Additionally, Alimentaria has decided to devote a space to taste six small dishes prepared by six well-known restaurants —El Celler de Can Roca, Aponiente, Azafrán, Be So, Gresca and Via Veneto— plus two stands with Iberico ham and cheese paired with different wines. Diners will be able to taste these bites on hourly intervals. Price: €30

17 April. Garnacha wines are the focus of the events hosted by Terra de Garnatxes association today which include a showroom with producers, mostly from Catalonia and France, followed by a tasting led by Pedro Ballesteros (17:00). From 20:00 to 22:00 the Garnatxa Party will be in full swing. Anyone interested in attending should send an email to info@terradegarnatxes.com for a ticket. Where: Hotel Omm (Roselló, 265) Barcelona.

18 April. Another noticeable event taking place alongisde Alimentaria is Mujeres del Vino, with the presence of more than 25 female winemakers and producers based in different places across Spain such as Anne Cannan from Clos Figueras (Priorat), who has organized the event, Adriana and Beatriz Ochoa from Bodegas Ochoa (Navarra), Ana Gómez from Bodegas Gratias (Manchuela), Bárbara Mesquida Mora (Mallorca), Bibiana García from Cortijo Los Aguilares (Sierras de Málaga), Mireia Pujol-Busquets from Alta Alella, Bárbara Palacios from Barbarot (Rioja) or Pamela Geddes from La Pamela (Jumilla), among many others. Where: Fábrica Moritz (Ronda Sant Antoni, 39-41) Barcelona. When: 19:00-23:30 How much: €5. Send an email to enoturisme@closfigueras.com to book your place.

18-22 April. The DO Montilla-Moriles organizes in Córdoba (Plaza de Colón s/n) its Annual Wine Tasting. This five-day event brings together 27 producers and over 300 wines and vinegars, along with a dozen restaurants from the province.

19 April. As part of its tastings agenda devoted to the "new vignerons", the Unión Española de Catadores in Madrid (Lope de Vega, 27) has called Juan Manuel Bellver, director of merchant Lavinia Madrid,  to present a personal selection of wines made by men and women who stand out for focusing on terroir from the vineyard to the bottle. Time: 19:00 Price: €35 (€20 members)

19-21 April. The cellars of Bodegas Franco-Españolas in Logroño turn into theatre stages to host five microtheatre plays selected at the “+Teatro con Diamante” competition. The public will vote to choose the winning play while visiting the winery and tasting three wines in the Diamante range (white, rosé and Talla de Diamante). Hours: Thursday and Friday from 19:00 to 21:00 every half an hour, and Saturday from 18:30. Price: €17 Call +34 941 251290 to book.

24 April. La Geria in Lanzarote is one of the world's most singular wine landscapes. The wines of one of the best known producers in the island, El Grifo, travel to Umami in Gijón (Avda. Rufo Rendueles, 8) where they will be presented by Tomás Mesa, technical director of the winery. The following wines will be included in the tasting: Malvasía de Colección Seco, Malvasía sobre Lías, Rosado de Lágrima, Tinto Listán Negro and Canari. Time: 20:00 Price: €15

26 April. Fernando Mora will talk about Ageing vs Terroir as he presents his wine classification proposal for Campo de Borja, a region where he works and which was the basis of his final thesis to obtain the Master of Wine title. The talk will be followed by a tasting of wines from Burgundy and Priorat "to understand the different quality steps in a classification". Location: Auditorio de Borja Time: 12:00 Free entrance but limited seats.

28 April. A new edition of La Nit de les Mines will be held at Les Mines Museum in Bellmunt del Priorat with the presence of local producers who will pour over 25 wines from the DOQ Priorat. There will also be tapas and live music. Time: 20:00 Price: €6

28 April - 1 May. The Feira do Viño do Ribeiro celebrates a new edition in Ribadavia (Ourense) with a programme including sports activities, wine & cooking workshops, a tasting in pairs competition hosted by Miguel Anxo Besada, sommelier at Casa Aurora and A Curva, as weill as live music and a guided tour of the Castle of Ribadavia. At the stands, visitors can taste wines made by 36 bodegas and colleiteiros such as Casal de Armán, Bodegas Cunqueiro, Viña Costeira, Sameirás or Ramón do Casar. Time: 11:00-22:00

Do you know of any interesting wine events which are not on this list? Are you a restaurateur or retailer who organises tastings or wine events for the general public? Send us your calendar to yolanda@spanishwinelover.com