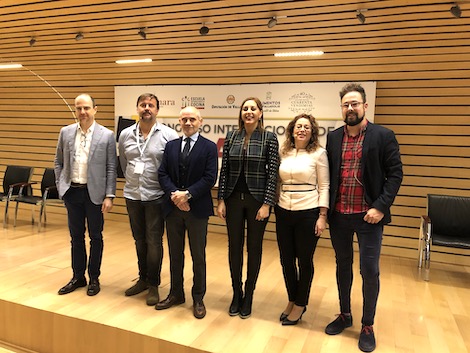 Masters of Wine Andreas Kubach, Norrel Robertson, Almudena Alberca and Fernando Mora, with the conference organizers (in the centre of the picture). Photo: I Congreso de Sala Internacional de Valladolid

It is not easy to bring together a handful of Masters of Wine, but the 1st International Front of House Congress held in Valladolid last week went the extra mile and gathered four of them —Almudena Alberca, Andreas Kubach, Fernando Mora and Norrel Robertson— all residing in Spain, to share their personal and sometimes divergent vision of the wine sector in Spain.

After an individual presentation by each of the MW —old vineyards (Mora), Garnacha (Robertson), wines worth drinking (Kubach) and international market trends (Alberca) — the experts took part in two lively debates and a round table, all of them skillfully chaired by Pedro Ruiz Aragoneses, general manager of Pago de Carraovejas.

"We need to trace old vines. Anyone can make a wine and label it as "old vines" because the use of that expression is not regulated," said Mora, who projected images of wines labeled with this legend, very common in markets such as the UK. "We have to save old vines and communicate the value of these vineyards to the people.” Kubach, who works in several areas of Spain, added that there are many old vineyards in Gredos. "We have only scratched the surface" of this region, he said.

Robertson, who works 30 hectares of vineyards in Calatayud, many of them old, supported Mora's words and also praised the great potential of areas such as his, with good Garnacha vineyards on pebble soils. "You might think you're in Châteauneuf du Pape but here you find vines that cost €10,000 instead of €250,000," added El Escocés Volante.

For Alberca, technical director at Bodegas Viña Mayor, Spain could not only lead the way in organic vineyard farming but should also have many more wineries listed in the Wineries for Climate Protection certification, which seeks improvements in environmental sustainability. The only female Master of Wine in Spain also defended the need to anticipate what is going to happen in terms of climate change and look for solutions. "I would think less about terroir classification and more about lowering the pH of Tempranillo. A classification would only last us for a short time.”

Unlike Mora, who pointed to the fact "that the same message has been sent for years and now the variables are changed,” Alberca defended the need to "study other varieties without losing our identity and to consider different grapes as has been done in Bordeaux, where varieties such as Marselan, Castets or Albariño have been approved.” Mora, who spoke of the contradiction that implies a demand for wines with less alcohol in a context of climate change, did not share Alberca's opinion. "I don't understand Touriga grapes in Pauillac. Nor do I see Cabernet in Burgundy.”

Mora and Alberca also spoke briefly about sustainable packaging. "There is not enough cork for all the wines that are produced, so whether we like it or not, we will have to move on to alternative closures. We should also think about using lighter glass bottles and more efficient means of transport. We all want to be sustainable but, like it or not, our wines travel to Japan burning diesel.”

Robertson and Kubach were particularly outspoken in this regard. "There is a lot of mediocre agriculture boosted by subsidies. Wine must be regarded as a commodity, not as something for distillation or to be sold for two euros. There are many valid strategies, but we should be clear about where we want to go,” said the Scottish Master of Wine.

Kubach, with extensive experience in management, went further adding that many wineries are "poorly dimensioned, with no connection between the technical, financial and sales fields. Many wineries do not know why they exist, but every producer should define a strategy and a business model. It could be a garage or Félix Solís, which is very well managed because they understand what they do. In general, the world of wine in Spain is very poorly managed.”

For the German Master of Wine, the sector must devote more time to the philosophical aspect of wine, while remaining competitive. "Our wines must be authentic and sustainable. It is an ethical necessity but it is also a fundamental requirement because wine is a luxury product,” said Kubach, who identifies four factors to assess the quality of wines: technical, organoleptic, cultural and ideological. "A great wine must be excellent in all four aspects.”

Robertson praised the favourable situation for the country's wines on the international scene at the moment. "Climate change will probably limit us more than before and we are now facing stagnant markets such as the United States and the United Kingdom, but we're selling Spain like it's never been done before. The country looks fragmented in the big fairs, but that's the diversity of Spain and it's something we should celebrate,” said the Scottish MW, seconded by Kubach. "We're finally improving as producers and I hope the world values the diversity that Spain offers. It is not difficult to sell abroad. If you make interesting wines, the buyers will find you, but there are wines that are not even worth trying. We lack personality in the mid-range.”

Mora and Alberca agreed that Spaniards are spoilt in this regard. "We know that we can buy wine at reasonable prices, while in other countries wine is much more expensive and people are more willing to pay," both said. Mora, who revealed that Frontonio started exporting 95% of its production, now sells 25% of its wines in Spain. "There is a growing consumer base willing to pay more and try different wines".

"A great deal of the people who drink both local and foreign wine are winemakers,” said Alberca, adding that people in this job need to travel, taste foreign wines and combine this experience with structured training to allow them to describe a wine with a universal language. For Mora, whose frequent travelling helps him to be aware of changes in the market, winemakers outside Spain interact more with each other and benefit from it. "Here we lack confidence in ourselves and we are afraid that our neighbour might steal our clients."

The discussion was chaired by Pedro Ruiz Aragoneses, whose Ossian range is outside the DO Rueda following the disqualification of their wines. He introduced a topic which the four Masters of Wine agreed on: the authorities and regulatory boards must re-examine many of their positions and refrain from imposing styles that exclude many winemakers.

In contrast to the praise for the classification changes in Bierzo, the new categories in Rioja aroused more criticism. "I don't like to talk about the new designations outside Spain because we look ridiculous. Rioja has the potential to make wines of origin, not of style. We need an alternative quality pyramid to the current one but the legislation doesn't help us,” explained Kubach, who cannot label his village wines from Leza because the winery is in Villabuena. "Don't make this mistake when you develop the new classification in Ribera del Duero," he alerted hundreds of people in the audience, including sommeliers, winemakers and other wine professionals.

Mora questioned the relevance of some appellations of origin. "All the specifications are copied from Rioja and then moderately adapted to each area. Rioja is a brand but we have to consider whether other DOs add up or detract.”

For Kubach, the biodynamic movement has succeeded in getting some producers of formulaic products to reconsider how they make wine, but the problem now is post-truth: "We must overcome dogmas such as the notion that filtered wines are not good, or that certain wines are the result of what consumers demand", said the director of Peninsula Vinicultores.

Robertson, who makes wines with striking names such as Manda Huevos ("I can’t believe it, get out of here") or Dos Dedos de Frente ("To be smart"), seconded Kubach's words but also warned about "crusties wines, made by individuals who claim to defend the terroir of something that does not exist, because the whole thing is a myth. Alberca nodded and added: "Faults taste the same all over the world. Deconstruction of a wine is only possible if it is based on knowledge.”

"They help to gain credibility in certain markets although these days there are no tasting leaders like Robert Parker used to be," Kubach said. "The influence of social media is important but the prevailing factor is the coherence of your project and your wines.”

Being Master of Wine

"I became a Master of Wine in 2000, before the narcissism we experience nowadays and the arrival of internet", explained Robertson, who began his career as a wine salesman. "Now I see many candidates in a bubble subject to a great deal of pressure that I didn't have, although it's true that the title now gives you more money and more work.”

Travel shock. Jonas Tofterup on the effects of travel on wine
Almudena Alberca, the first Spanish woman to become MW
Five MWs share their views on Spanish wines
The long hard road to become a Master of Wine
A MW research paper on wine classifications in Spain
Frontonio seeks to make the best Garnacha in Aragón
Garnacha, can a grape be sexy?
Meet Mora and Kubach, the two new Masters of Wine in Spain
Microbes, flamenco and an open-minded look at Spanish wines
DWWA: Inside the world’s largest wine competition
Tasting with five Masters of Wine and other spring highlights