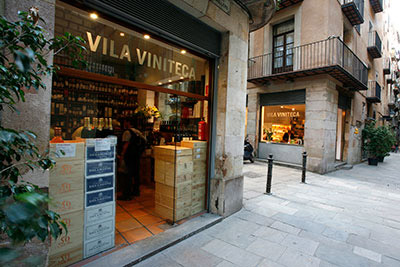 Established since 1932 in Barcelona’s popular El Born district, Vila Viniteca has become a key player in Spain’s wine industry. The old-style flavor of this former grocery shop remains in the deli store, a must-go destination for cheese lovers thanks to the wide and interesting selection curated by Eva Vila. The wine shop, located only a few metres away, was founded in 1993 by Quim Vila and producer Francisco Martí, owner of Ca N’Estruc winery in Esparraguera (Barcelona).

From that very moment, this burgeoning business soared meteorically —a growth which echoes the revolution experienced by the Spanish wine industry itself. Restless owner Quim Vila has used his great commercial instinct to play a relevant role in the launch of wines which are nowadays among the most renowned, notably those of Álvaro Palacios and Peter Sisseck, but also others made by dozens of producers based in numerous Spanish wine regions. Worth mentioning are his efforts to introduce great international wines onto the Spanish market as well as pioneering en primeur wine sales in 2000.

The powerful Vila Viniteca group also encompasses several wine clubs and a wide tastings programme with activities held at their facilities in Barcelona (a second wine store has been recently established at Illa Diagonal shopping centre) and Madrid —El Mostrador de Vila Viniteca (General Díez Porlier, 45) opened in 2013. Vi Novell, a popular street festival, is held in November but undoubtedly the most awaited event is La Musica del Vi (literally “the music of wine”), an equally magnificent and frustrating wine tasting event —given that it is impossible to even try a quarter of all the wines showcased— which brings together most of the producers Vila Viniteca works with both from Spain and abroad. It takes place every two years at the imposing Llotja de Mar.

The company also focuses on promoting wine culture in Spain. Wine geeks are particularly fond of the annual Wine Tasting in Pairs competition, which is held alternatively in Madrid and Barcelona since 2008. Tickets are usually sold within minutes. Prizes are attractive indeed: €20,000 for the winners, €7,000 for the runner-up couple and 3,000 for the third pair.

Over the last couple of years Vila Viniteca’s blog has been revamped with weekly contributions from wine writers, winemakers, critics and key players from outside the industry who have something valuable to add to the conversation. Quim Vila, for his part, writes a weekly wine recommendation from the company’s portfolio in El Periodico de Catalunya’s weekend magazine. Vila Viniteca is undoubtedly much more than a mere wine store. A.C.